Delivered in 2017, the Aurora yacht is one of only 103 yachts in her size range. Custom built by Lurssen, she was originally known as Project Gatsby, due to the influences of the roaring twenties.

The interior of the Aurora yacht is strongly inspired by the Art Deco style of the 1920s. The design has influences from several designers from that era. Responsible for this luxurious design is Winch Design, one of the world’s most successful yacht designers. Every deck has spaces created for families, and the interior is highlighted by the lightning fixtures all around the yacht.

The interior of the Aurora yacht is also quite a bit larger than other yachts of similar size, partly because of the full-beam skylounge. One of the more impressive areas on the yacht. She is one of the yachts with the most interior volume in the world, so there is plenty of space for her guests.

Russian billionaire Andrey Molchanov currently owns the Aurora yacht. He is the owner and founder of the company LSR Group, and they specialise in real estate development, as well as the production of building material. In fact, the LSR Group has been working construction in Russia since 1993, with over 12,000 employees.

She has the space to accommodate up to sixteen guests, and a twenty-two person crew.

As well as designing the interior of the Aurora yacht, Winch design are also responsible for the design of her exterior, with stainless steel and mahogany furnishings. The Art Deco inspiration continues here, with circular portholes and curved lines. The naval architecture was developed by Lürssen, and the Aurora has a steel hull and a teak deck. The superstructure is made of aluminium. 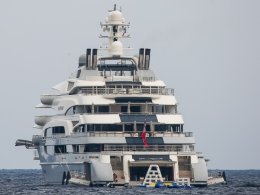 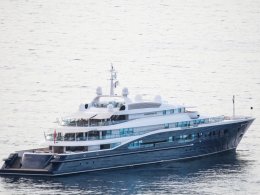 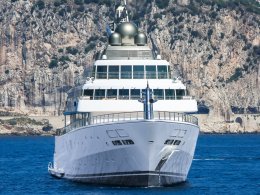 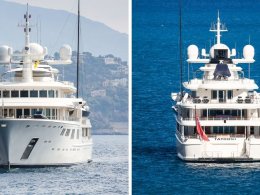