The flagship of Van der Werf, the Chakra yacht is one of only 58 yachts in her size range. Placed in the top 5% by the LOA in the entire world, and she has had a couple of other previous names – Cumulus, and Salem.

With a very modern and luxurious interior, the Chakra yacht has a lot to offer. For guests who want to be pampered, there is a beauty salon available, as well as a luxury spa. There is also a well equipped gym on board, along with an elevator that allows guests to move from one deck to the next with ease.

The goal was to create an elegant interior, with a comfortable atmosphere. The styling is timeless, and with the beautiful furnishings, this goal was accomplished. With plenty of dark wooden features, mixed with light and modern furniture, the Chakra yacht gives off a luxurious and elegant vibe.

There is mystery surrounding the owner of the Chakra yacht, and not much is known about him. His name is Kheir Eddine El Jisir, a Lebanese/Saudi businessman with a net worth of 200 million US dollars. He is also the owner of another yacht – the Austal yacht Serenity. Born in 1953, he currently resides in Beirut.

He was the owner of construction company Saudi Oger, but that had to close down in 2017, leaving thousands of workers without employment.

She had the capacity to keep 24 guests in her 20 different suits, as well as up to 30 crew to help run things as smoothly as possible.

The spacious exterior was designed by Scheepswerf Gebr. van der Werf, who were also the builders of the Chakra yacht. She has a total of five decks and there are designated spaces for yoga out in the open. There is also a spa-pool on one of the decks. Her white coloring, combined with the wooden decks, gives off a fresh and modern look. Her exterior is mostly white, but with some dark darker parts to contrast the lightness.

There are also a big selection of water toys available, such as Jet Skis, kayaks, scuba diving equipment, and more. 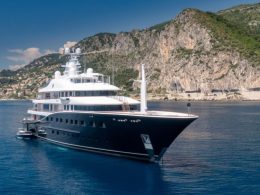 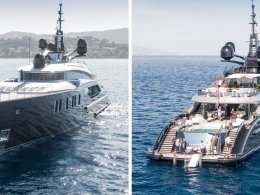 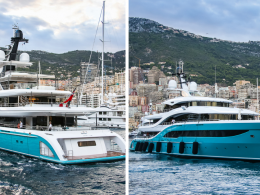