The HORIZONS III yacht is a luxurious superyacht built by Lürssen, a German shipyard known for building bespoke motor yachts of all sizes. She was formerly known as MARTHA ANN and was delivered in 2008 and later underwent a refit in 2016.

She belongs to the top 5% by LOA in the world and compared to similarly-sized motor yachts, her volume is 196.73 GT above the average. She is currently sailing under the Marshall Islands flag, the 5th most popular flag state for superyachts with a total of 360 yachts registered.

HORIZONS III’s interior is the work of Francois Zuretti and exudes a subtle and traditional appeal, with a cozy atmosphere, comfortable spaces, and intricate detailing. She is adorned with a neutral yet warm color scheme, lavish wood, and elaborate fabrics to create a stately and majestic look & feel throughout the yacht.

On her main deck, there is the main saloon, dining areas, and an impressive glass circular staircase. She flaunts an enormous sports bar and gym on the upper deck, in addition to a very large spa pool with expansive areas for outdoor lounging, sunbathing, and seating.

Additionally, the bridge deck can be opened up for entertaining purposes, allowing access to the aft deck from the sky lounge.

This enormous luxury yacht has sleek, contemporary lines, and even though her interior was designed with a classic aesthetic in mind, she has a modern vibe about her.

Her deep blue hull and massive size make her one of the most impressive yachts in the world. Almost every yacht feature imaginable is included on her, which makes her a true masterpiece.

HORIZONS III has a total of 5 cabins that can accommodate a total of 12 guests. Her luxurious accommodations on board include a full-beam master suite with a private entrance, a study, and a split-level master suite lounge area with sofa seating, an occasional table, electrical entertainment, and access to the yacht’s exterior deck.

On the lower deck, guests have their choice of four staterooms, each of which is very spacious and equipped with a king-sized bed.

She can accommodate 20 crew members to serve guests and ensure an experience of a lifetime.

Horizons III is built with a steel hull and aluminum superstructure, with teak decks. She is propelled by two Caterpillar engines, allowing her to reach a maximum speed of 15.5 knots.

Her average speed while cruising is 13 knots and her cruising range is 5,878 nautical miles from her 43,300-gallon fuel tanks at 12 knots.

This breathtakingly gorgeous and magnificent yacht has a price tag of $800 million, and its annual operating expenses can range anywhere from $5 million to $8 million.

The yacht’s owner is John Tyson, an American billionaire heir and businessman. He is chairman of Tyson Foods and owns beloved brands like Hillshire Farms, Jimmy Dean, and Aidells sausages.

His net worth is $2.9 billion and is included in Forbes’ Billionaires list of 2022. 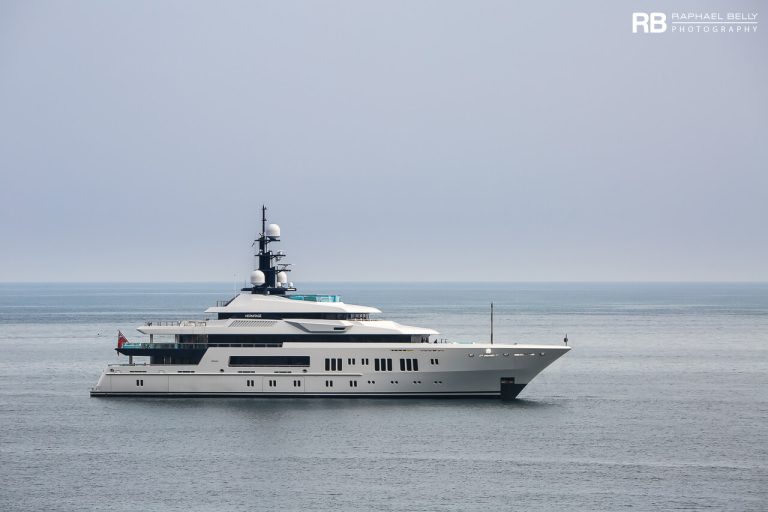 The HERMITAGE yacht was constructed by Lurssen at their shipyard in Rendsburg, Germany. Winch Design, a British designer…
Read More

Built by Italian shipbuilders Tankoa, SOLO yacht was delivered in 2018. The exterior and interior were designed by…
Read More

The AMEVI yacht is an impressive luxury yacht built by Oceanco, a shipyard based in The Netherlands. They…
Read More