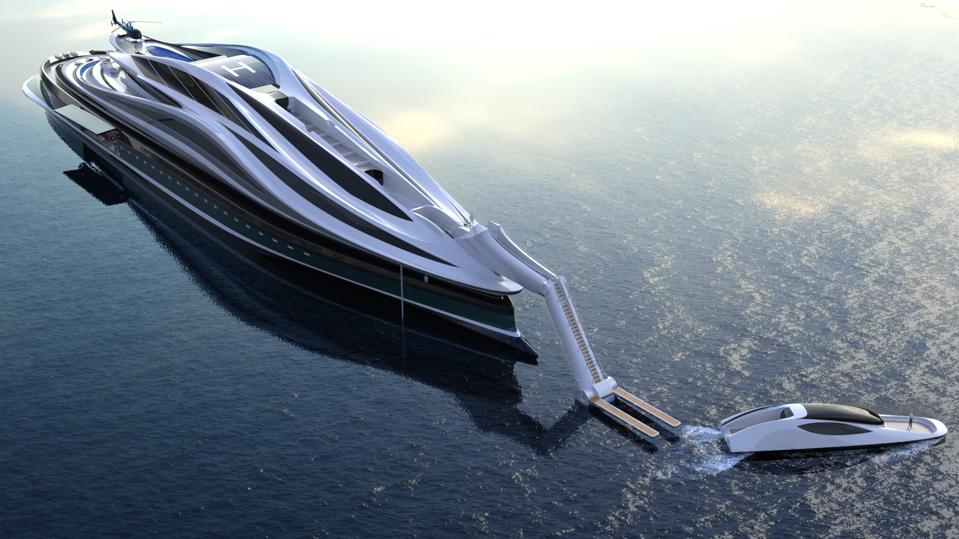 The exciting new megayacht concept from Lazzarini Design Studio will turn some heads as the swan-like body sails across the water.


The 137m superyacht is shaped like a swan and boasts a detachable head that can be used as a separate boat.


The enormous bird-shaped yacht is named AVANGAURDIA, which means ‘vanguard’ in English.


As the name suggests, the vessel leads the way in cutting-edge marine design.

The design company, based in Rome, has delivered on several innovative beings in the past few years, including flying cars, an amphibious catamaran named PAGARUS, and much more.


However, the waterbird-inspired mega yacht may be the most outlandish and innovative of the company’s designs.

The massive yacht is split into five decks and can accommodate up to 60 sea goers.


There is potential for even more guests when the yacht is dockside.


As for sleeping arrangements, the yacht can sleep up to 24 guests, 12 staff, and ten crew members.


There are many toys on board the ship.


An entire haul of supercars is also found on the superyacht, thanks to an expansive garage.


The yacht boasts many areas for socializing and sunbathing for the 60 guests, including a swimming pool and a jacuzzi.

The exterior of the yacht features flowing lines and curves that reflect the silhouette of a swan on the water.


The head of the swan is a control tower and acts like a brain for the vessel.


The inspiration for the head comes from 1970s Japanese manga.


It also doubles as a 16m cruiser that is perfect for daytime trips around the water.


A second control point on board will operate the boat while the head is used for a daytime jaunt across the water.


Like a real-life swan in the water, the head of the yacht that houses the control tower is perched on a flexible neck.


The neck uses a fulcrum to give it a full range of movement and lower the head into the water from its crow’s neck perch.


The head floating in the air while the vessel is at anchor cuts an impressive image.


When the ship is underway, the head lowers to the middle of the megayacht to help steer the vessel in the right direction.


The lowered head is exactly like a swan nestling its head into its feathers.

The jet capsules that are located at the vessel’s rear can be used for increased propulsion.


Lazzarini has developed several innovative water transportation, and the jet capsules are just one amongst many.

The watercraft is fully customizable to the smallest detail and can serve as a private vessel for up to 20 passengers.


The egg-shaped mini-jet cruiser can be connected to the rear deck for extra auxiliary propulsion or disconnected and work independently to cruise people around the waters.


The swan’s power comes from the twin electric side engine and a central MTU Roll’s Royce engine.


This setup has the potential to push the yacht to a cruising speed of about 18 knots.


It remains just a concept at this stage, but the design studio says it could become a reality as soon as an investor is ready to commit to the concept.


The design company is confident that the yacht can be built and would require a $500 million investment from a potential buyer.

Lazzarini’s motto is ‘Think about the future but never forget the past,’ which can clearly be seen throughout his work.


His team of designers, engineers, and dreamers is creating some of the most innovative prototypes throughout the world.


He entered the yachting scene in the 1990s with his futuristic ideas, innovating in the relatively stagnated yachting industry.


The jet capsule is one of Lazzarini’s most highly awarded and praised designs.


The egg-shaped fiberglass yacht was the beginning of the designer’s most innovative concepts.


When Lazzarini was asked why he chose the concept of a Swan for AVANGUARDIA, he answered that he finds nature to be a source of inspiration because of its innate perfection and that the swan is a very definition of elegance and grace.


The swan-shaped yacht is the first of six animal-shaped watercraft concept yachts that Lazzarini has presented.


The PRODIGIUM is a monolith-inspired vessel that looks like a shark rising out of the water.


The yacht supersedes the AVANGUARDIA in size, measuring in at an enormous 153m.

The vessel will be the largest superyacht on the water if ever built.


The PAGARUS is another innovative design from the studio company.


The catamaran will have the ability to scuttle out of the water like a crab.


Lazzarini noticed a growing space in the industry for luxury off-the-grid vessels and designed a vessel to meet that need.


The PAGARUS, the Latin word for crab, was initially designed for military applications.