Musashi yacht is a $160 Million superyacht owned by American businessman, co-founder, and investor Lawrence Joseph Ellison, or more commonly known as Larry Ellison. Mr. Ellison was ranked as the 9th richest person and was also ranked 10th richest man on the planet, which meant that he could afford the pretty price tag on the incredible 288-feet superyacht.

Musashi was built by Feadship, founded in 1949 with headquarters in The Netherlands. Feadship is not new to the game of building superyachts for the wealthy. They have also been the engineers for superyachts, such as Bernard Arnault’s Symphony Yacht, Arrow superyacht (with a value of over $120 Million) and the well known  94-metre Viva superyacht. It is safe to say that with Musashi, they showed their brilliance and excellence in engineering luxury superyachts.

Musashi measures a length of  87.8m (288 ft) and her incredible hull was built using steel along with aluminum. Powered by four very powerful propellers and its power coming from two 5,766hp MTU 20V4000 M93L diesel engines Musashi can reach a max speed of 21 knots with a cruising speed of 15 knots. She has ample storage space for fuel with a  335,000 L fuel tank allowing her to travel up to 11 000 kilometres. She has an impressive weight of over 2463 tonnes.

Being a luxury superyacht designed for the super-wealthy, she does not lack outstanding amenities. Musashi is equipped with a beauty room, swimming pool, indoor and outdoor gyms, a movie room, and even an elevator. Musashi is fitted with air-conditioning throughout the yacht and integrated with stabilizers to keep the superyacht steady and safe for Larry and his guests.

With an incredible amount of workspace to work with and a team of highly respected interior designers working on the yacht, it’s safe to say that she can hold parties and provide people a great experience while traveling on the high seas.

Musashi yacht can accommodate up to 18-20 guests and 24 crew members to attain the ship and guest’s needs. With an approximate value of $160 Million, it is estimated that the annual running cost ranges between $10-$20 Million on top of maintenance and docking fees. It comes as no surprise that only the world’s wealthiest people can afford such a fine specimen of a yacht such as Musashi.

Musashi is an incredible behemoth of a yacht. With enough space and room to adventure almost endlessly she has comfortable air conditioned rooms for her guests and crew. With luxuries such as a movie theatre, Musashi serves as a secondary floating home on the crystal blue waters of France. 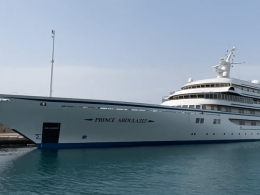 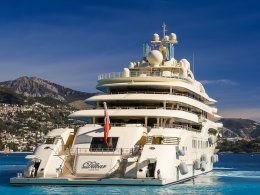 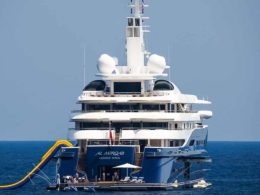 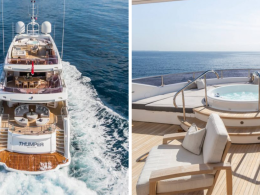