The extravagant vessel’s name, REGINA D’ITALIA II, means “Queen of Italy” in English – a name that is more than fitting for this stunning vessel.

Listed as number 836th on the ranking of the largest yachts in the world, she is the 12th largest yacht ever built by Codesa. The REGINA D’ITALIA II yacht was last refitted and painted in 2018.

The REGINA D’ITALIA II yacht’s elegant and detailed interior was penned by Lazzarini Pickering Architect along with the help of Stefano Gabbana.

The yacht is a reflection of the previous owner’s style – Dolce & Gabbana’s fashion design. The ‘Queen of Italy’ could be best described as a “high-fashion yacht” as she is a complete work of art.

Considered to have a minimalist style, she is styled with ruby and sapphire taps, gold veined marble floors, and gold door handles. Some of the regal furniture is dotted with leopard, mink, and crocodile skin.

The master suite features a large dressing room and a private gym. Each of the four staterooms is named after an exotic animal and they are the rhinoceros, giraffe, elephant, and crocodile.

The REGINA D’ITALIA II yacht features an exterior design by Franco & Anna Della Role and she has a brassy steel hull, an aluminum superstructure, and a high-quality teak wooden deck.

The “Queen” provides a lot of open space and alfresco dining zones across her three deck areas.

She is equipped with a zero-speed stabilization system, reducing any rolling motion while at anchor and maximizing onboard comfort.

They founded the renowned Italian luxury fashion house Dolce & Gabbana (D&G) in 1985 in Legnano. The former couple met in 1982 while they were both working for Giorgio Correggiari.

Thirteen years after owning the REGINA D’ITALIA, the designers decided to sell her to an anonymous buyer.

The real cost of the yacht is unknown, however, she was sold via Edmonton and Torrance Yachts in 2019. The REGINA D’ITALIA II was first asking for €18 million, but then reduced the asking price to €13.5 million.

Earlier this year, Kourtney Kardashian and Travis Barker were spotted on the prestigious REGINA D’ITALIA yacht off the coast of Portofino in Italy.

Built-in 2020 by Nobiskrug, ARTEFACT yacht is an incredibly unique and innovative yacht that has taken over the…
Read More 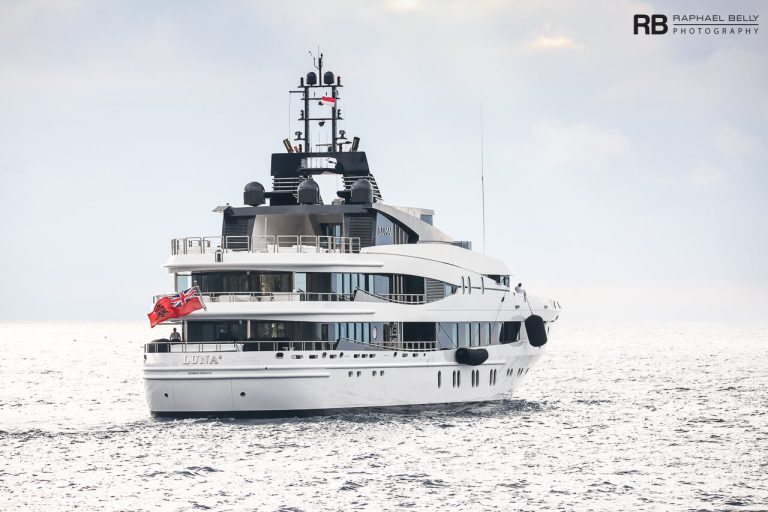 The LUNA B yacht is a 66m superyacht built by the Dutch shipyard Oceanco, an industry pioneer that…
Read More

SAMAR yacht was a marvel at the time of her build. The 77m luxury yacht has many amenities…