Built in the United Kingdom and delivered in 2012, the Vava II yacht is an impressive creation by Devonport. She is one of only 34 yachts in her size range.

The interior of the Vava II was designed by Rémi Tessier, a designer who favours simplicity and functionality. Inside the yacht you can find a beauty salon, a gym, a beach club, an elevator, and to top it all off – air conditioning. Not much is known about her interior, having mostly been seen by those fortunate enough to visit the Vava II. There are not many pictures available, but if it’s anything like the gorgeous exterior, it’s surely a sight to behold.

The owner of the Vava II is Ernesto Bertarelli, a Swiss-Italian billionaire. In 2012 Berarelli replaced the smaller Vava with this one, even though he still owns the 47 metre long My Vava. His love for sailing can be due to the time he spent in his youth in Monte Argentario.

He is also a philanthropist, having started foundations with his family to aid research in several different medical fields, such as both male and female infertility and reproduction. Bertarelli founded the yachting team Alinghi, and they won the America’s cup in 2013.

The Vava II yacht has a steel hull and aluminium superstructure, and the exterior is designed by Redman Whiteley Dixon. She has four large tender garage afts, and a pool with varying depth levels. There are a total of six decks, and is built like a small ship. A helicopter landing pad is also one of the many features of this yacht.

Her mostly white exterior shows off all the details in her designs, along with the sleek lines and impressive size. Inspired by naval design, she has smooth curves and decks stacked neatly, with an overall balanced look. 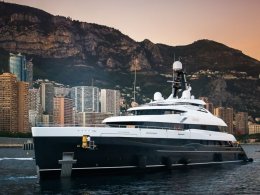 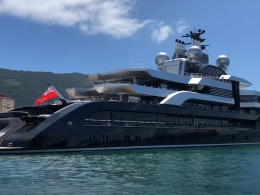