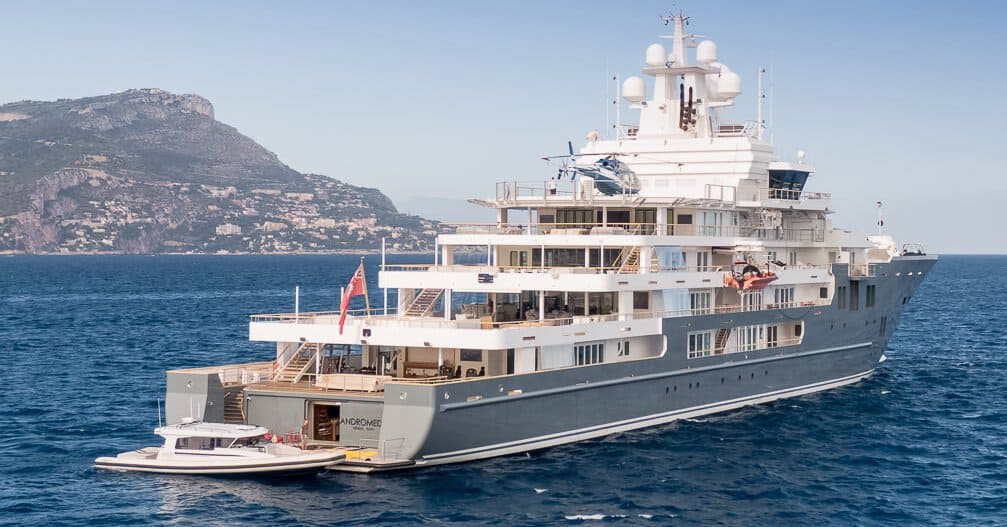 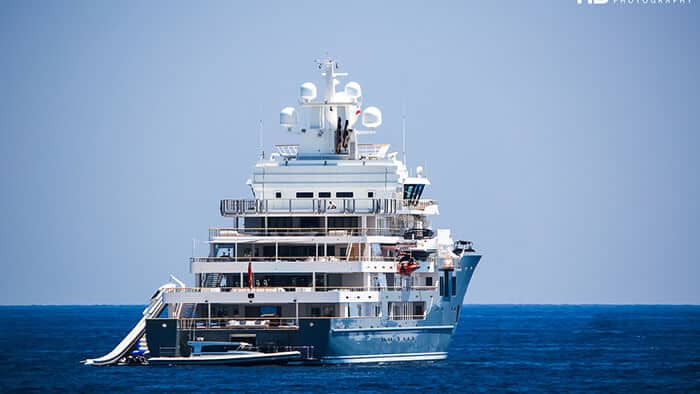 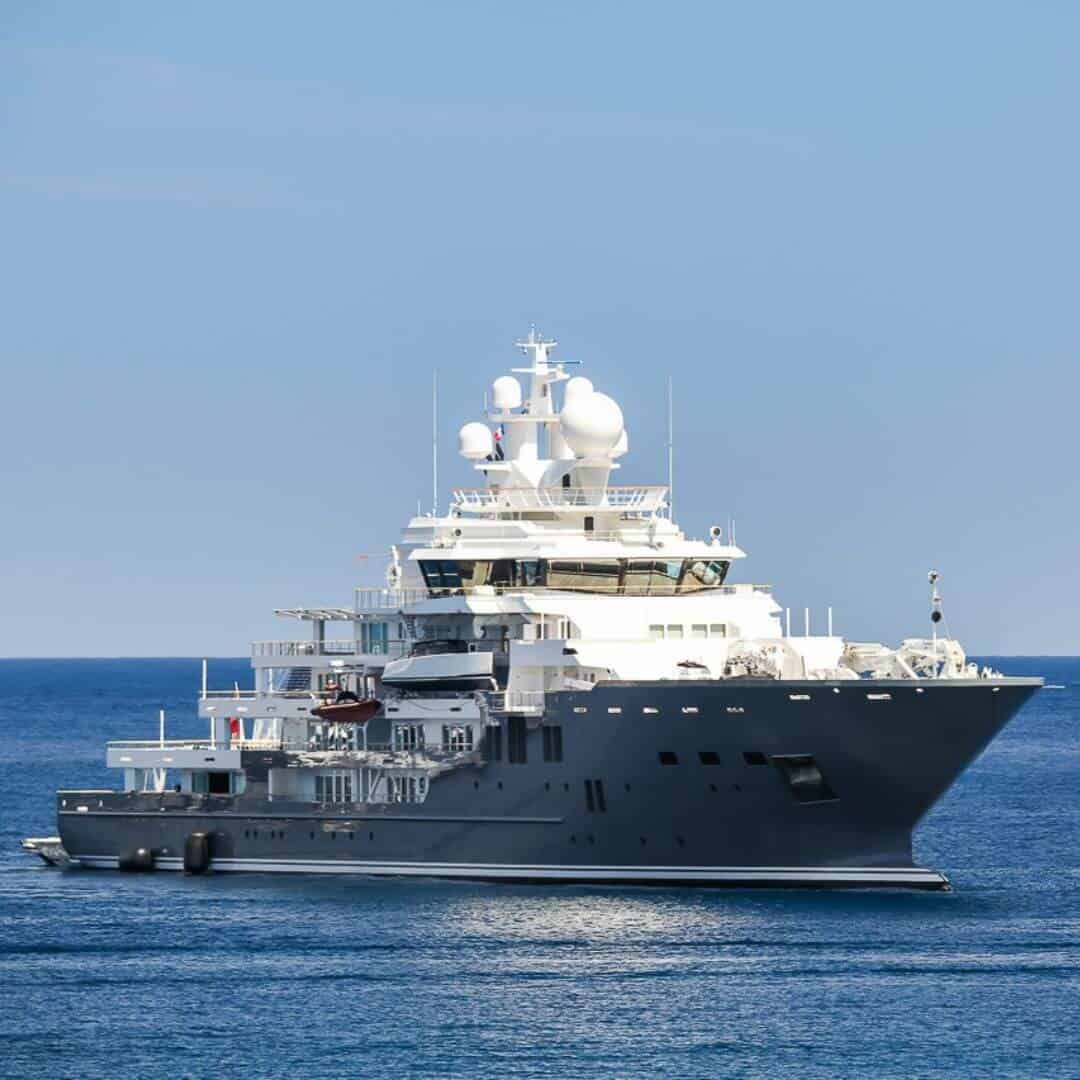 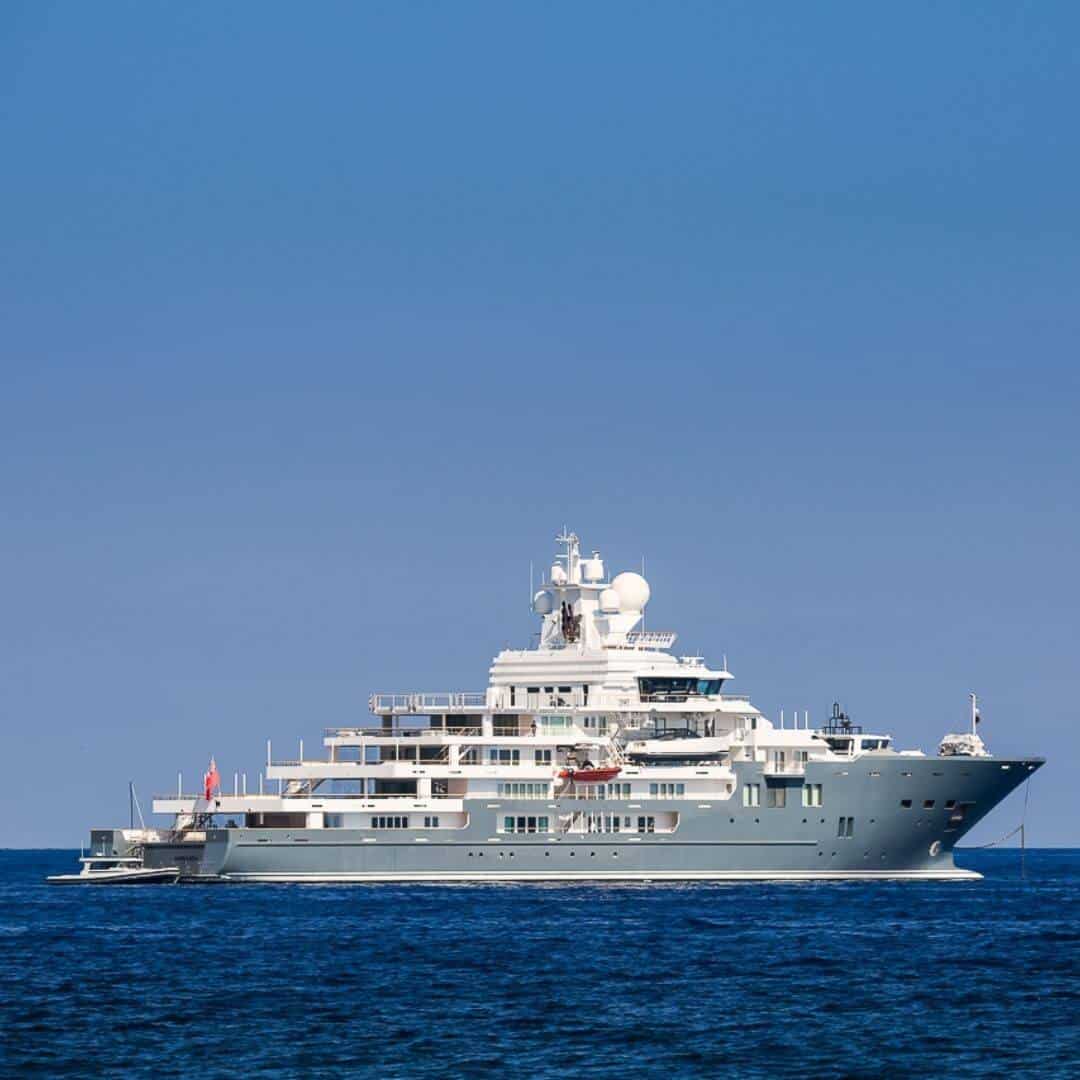 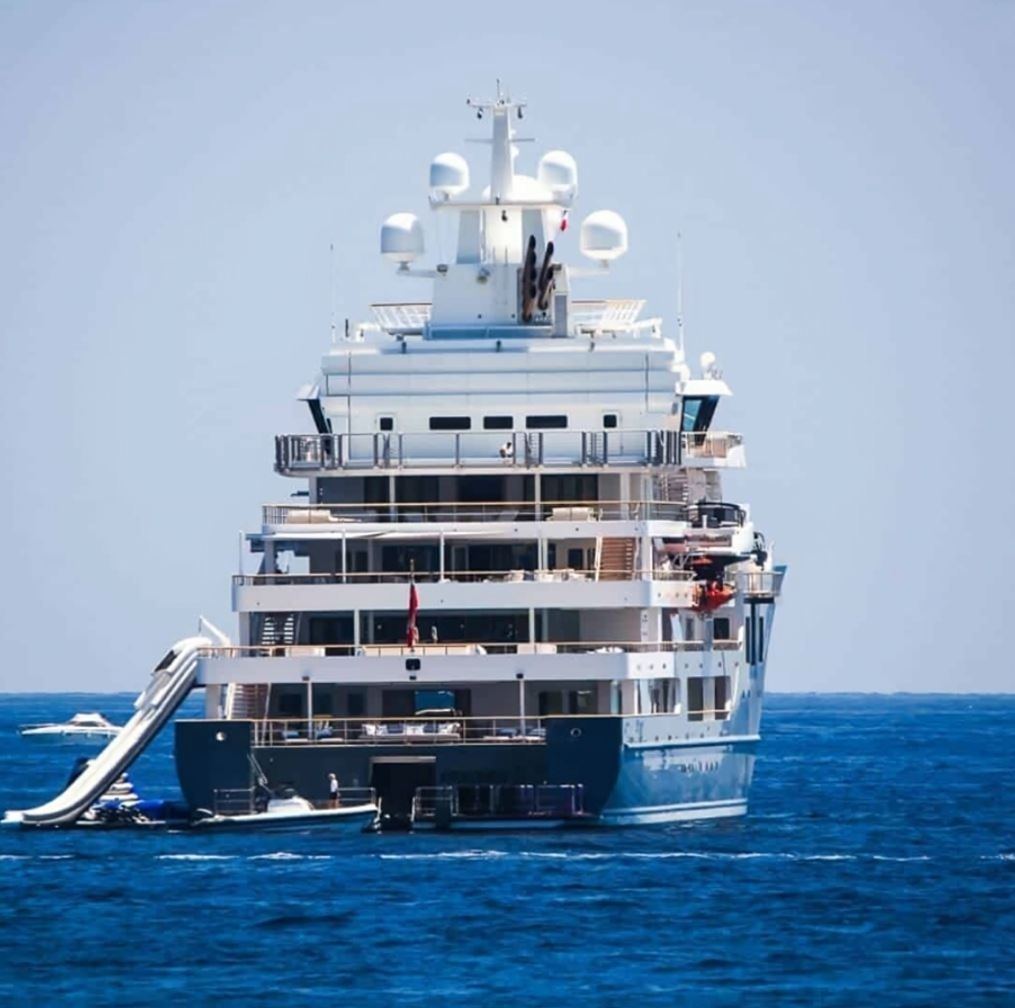 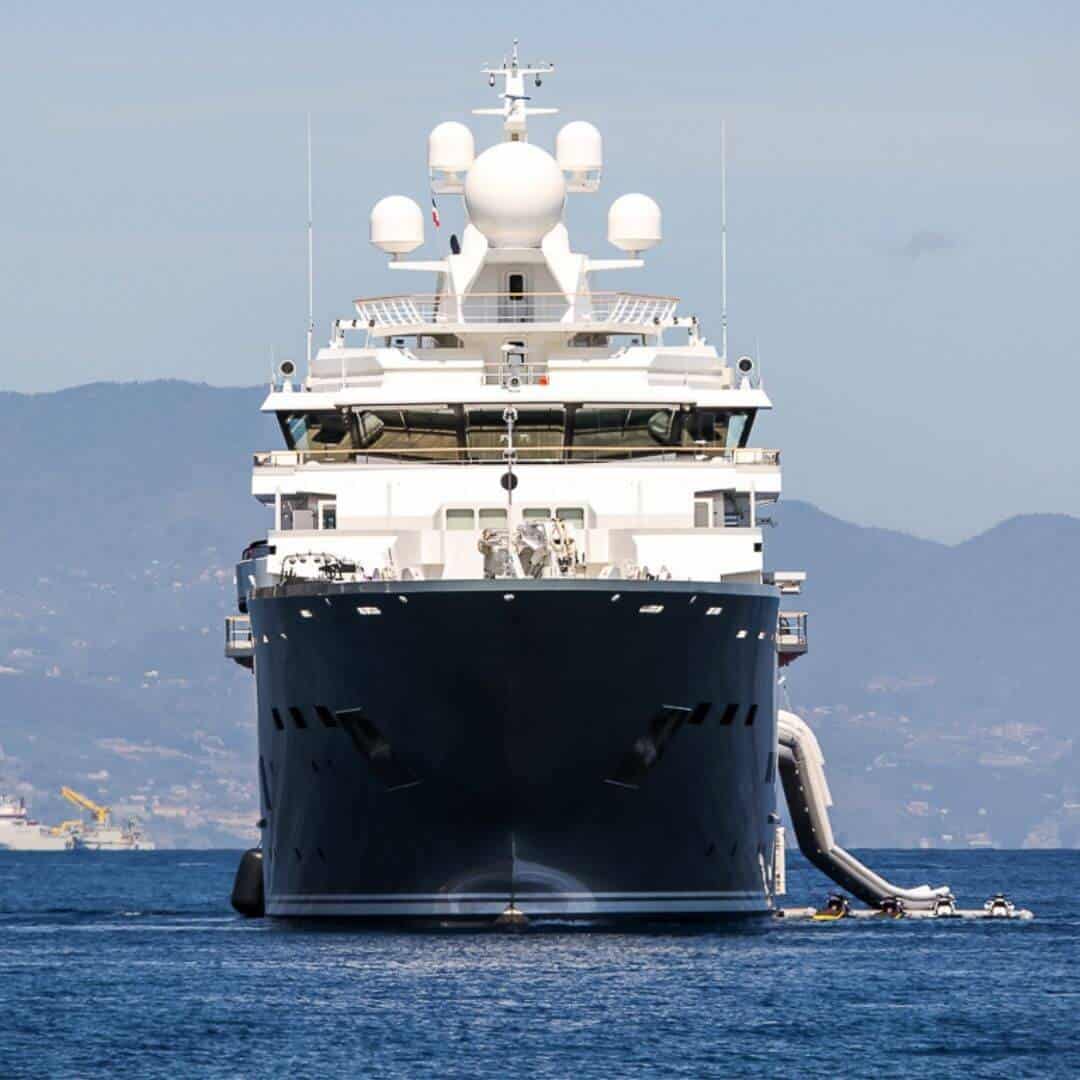 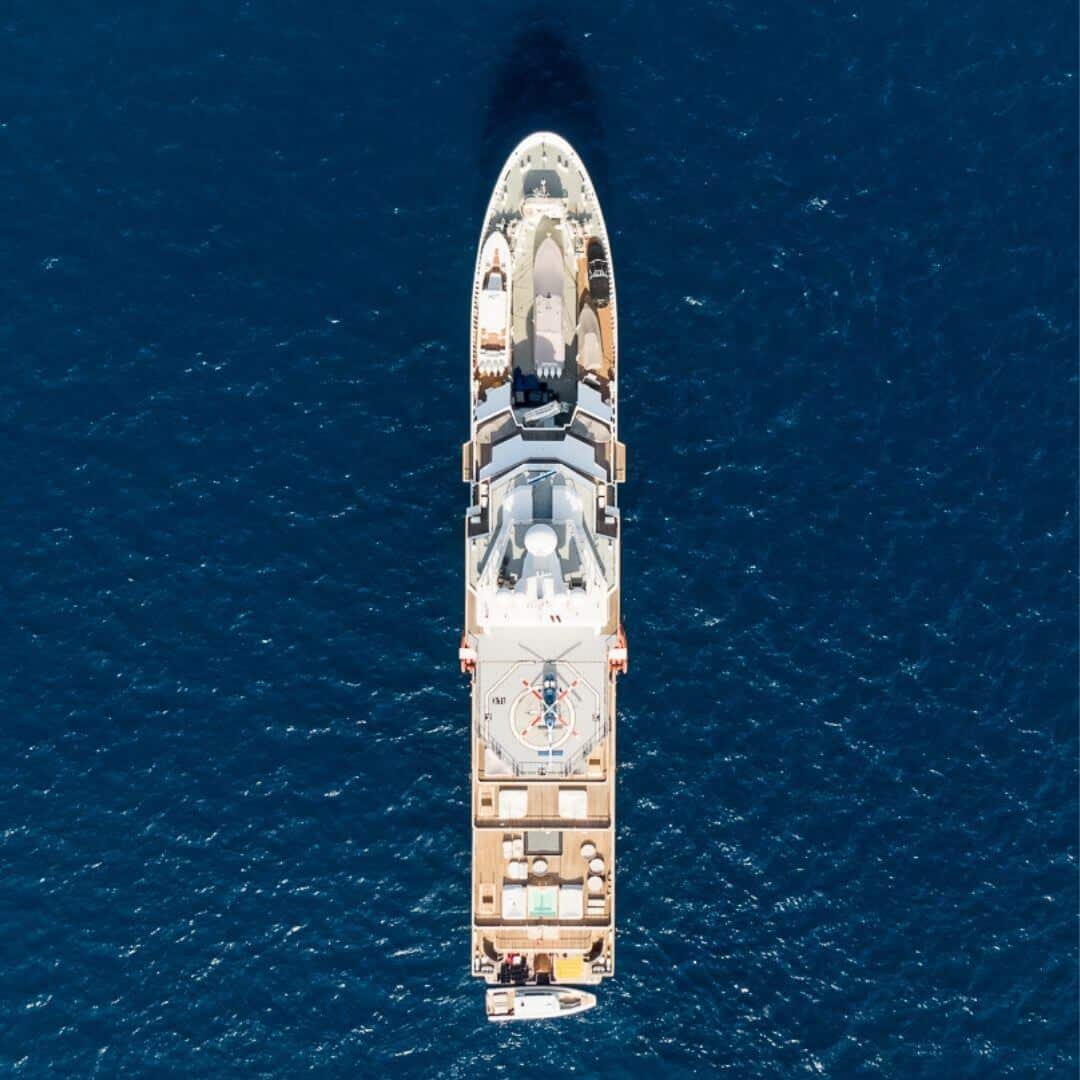 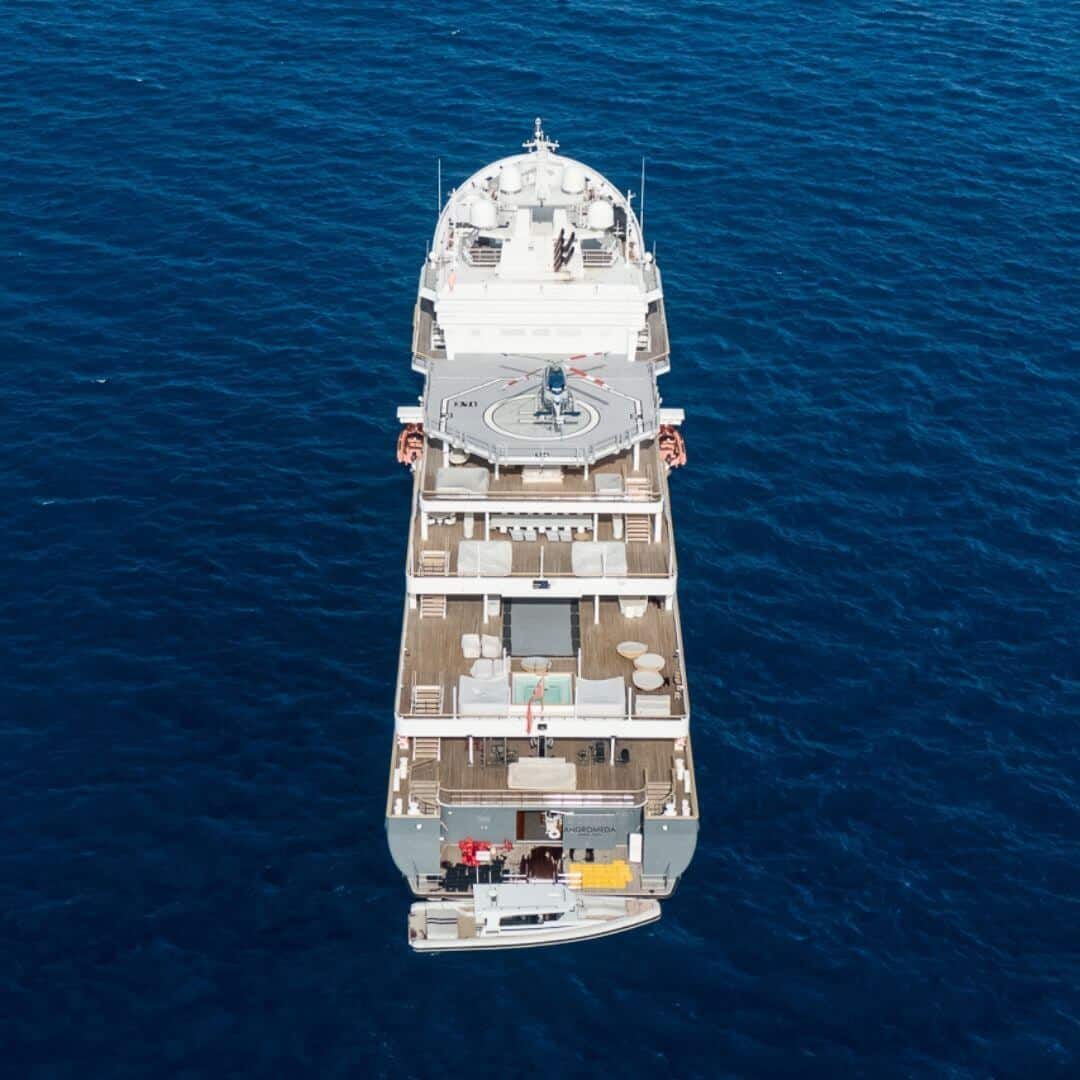 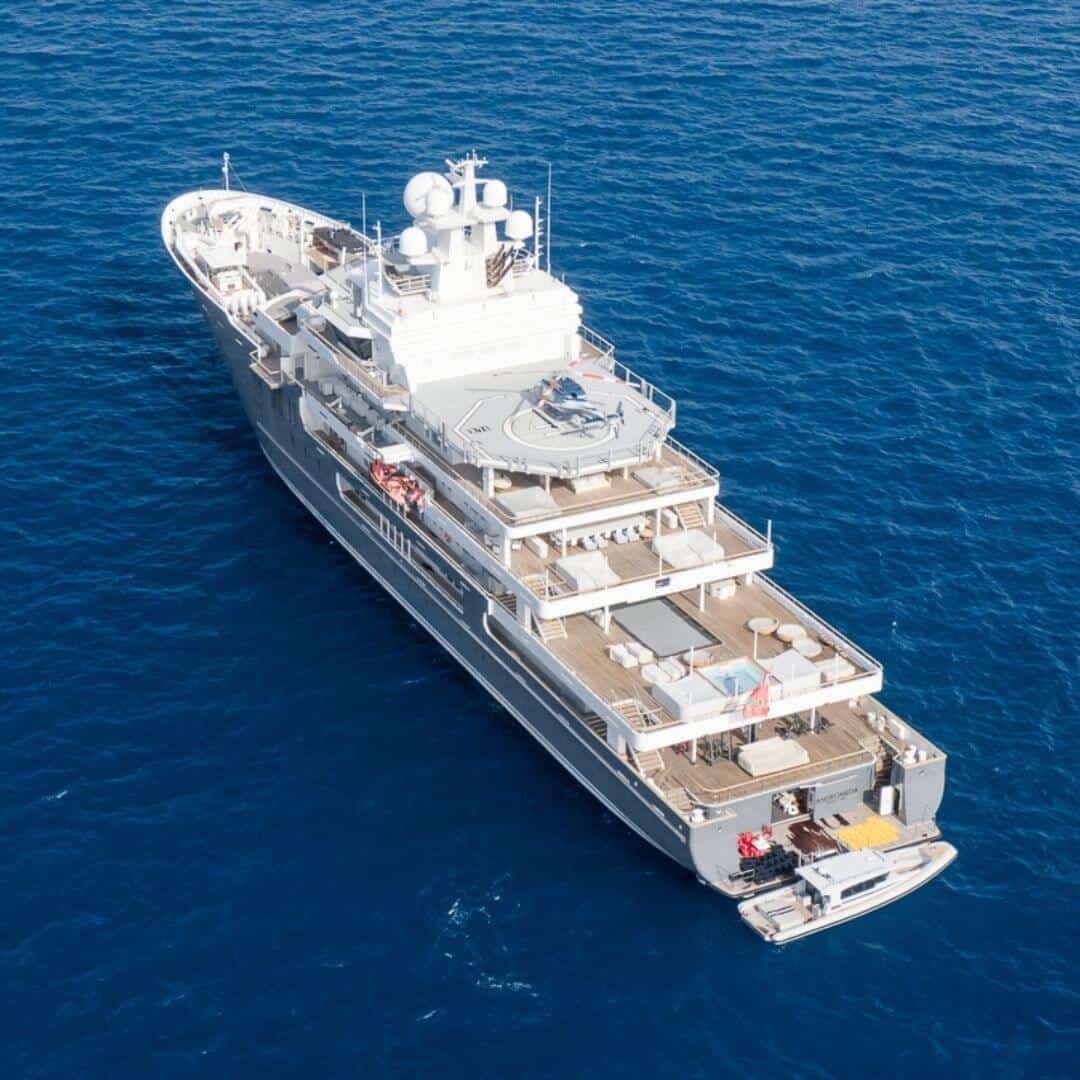 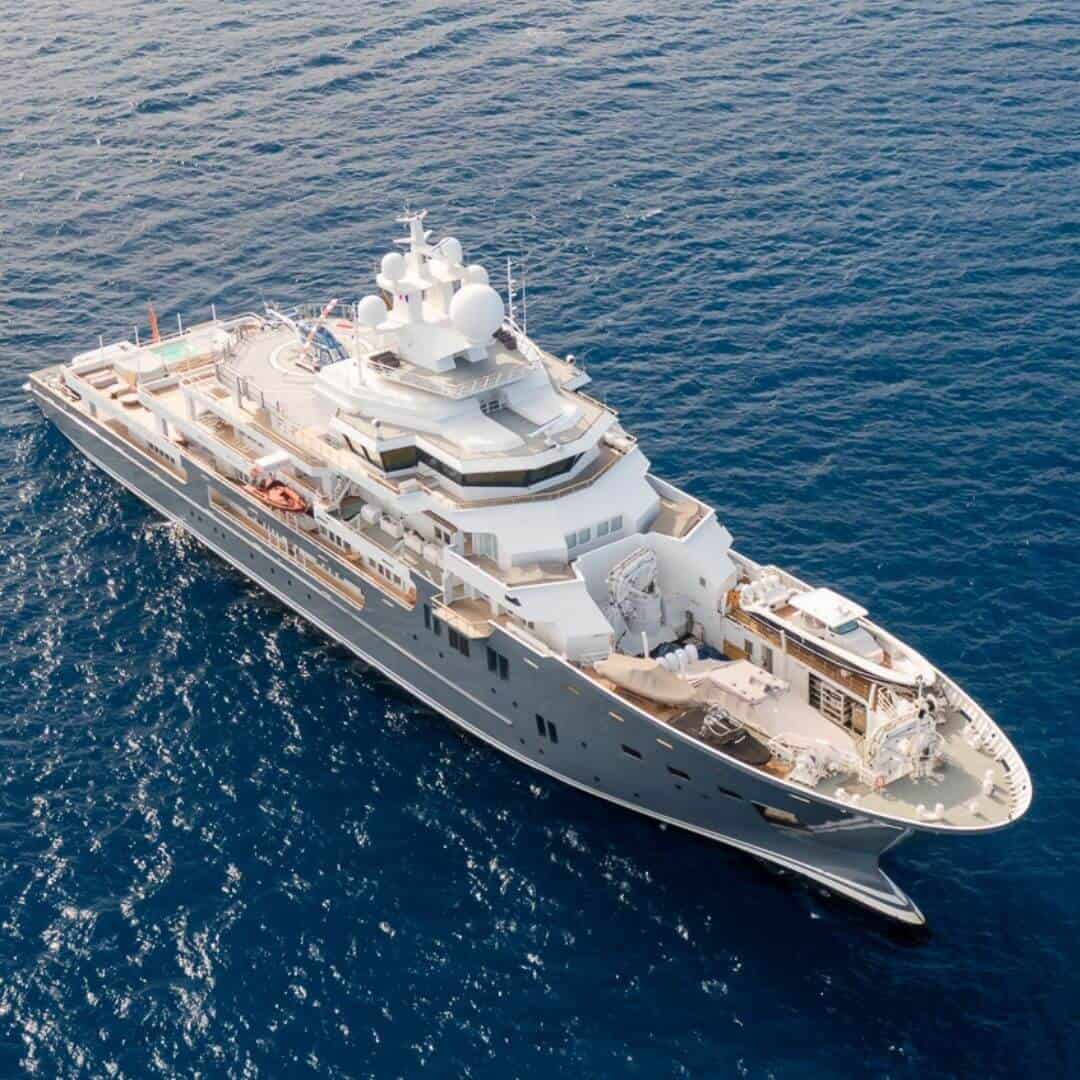 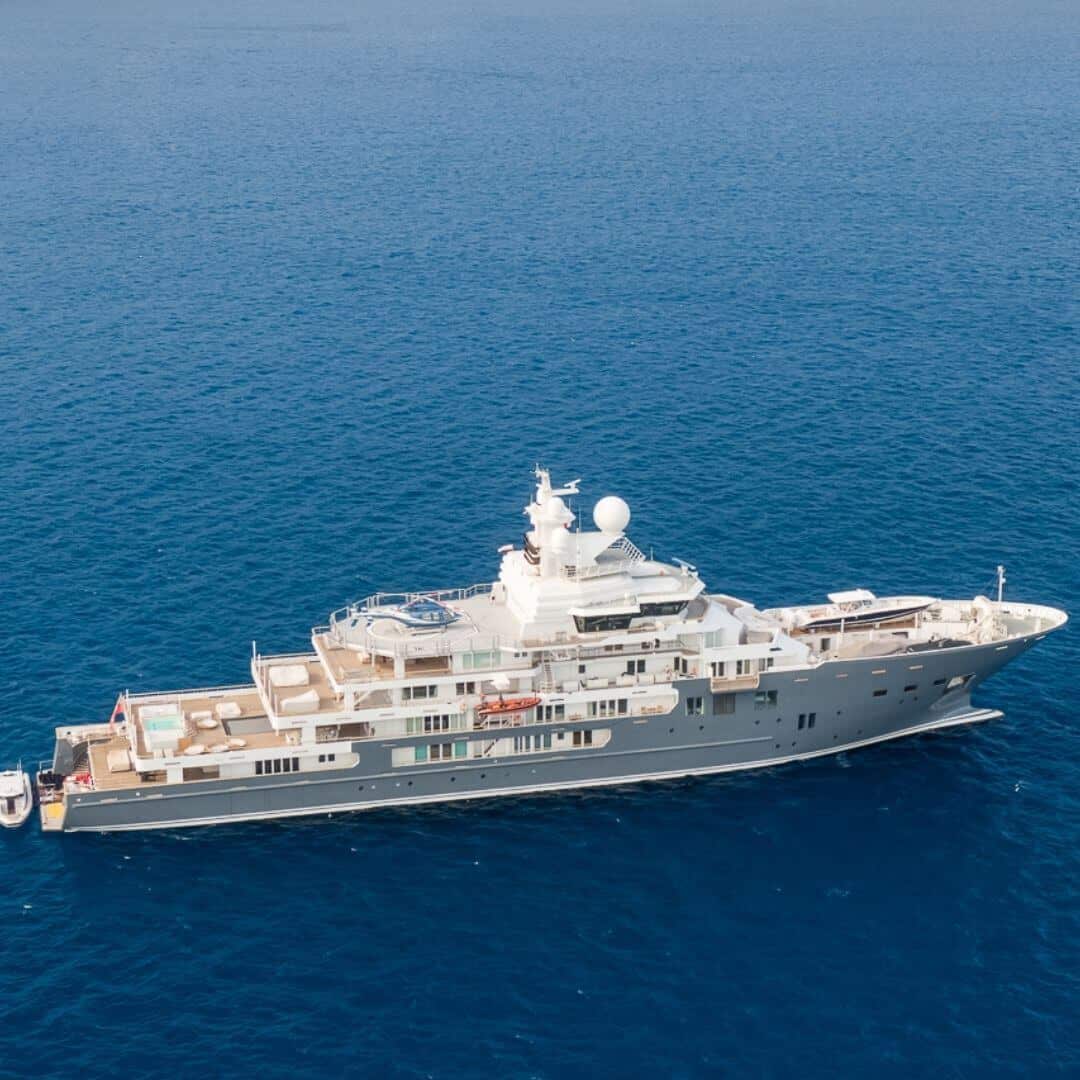 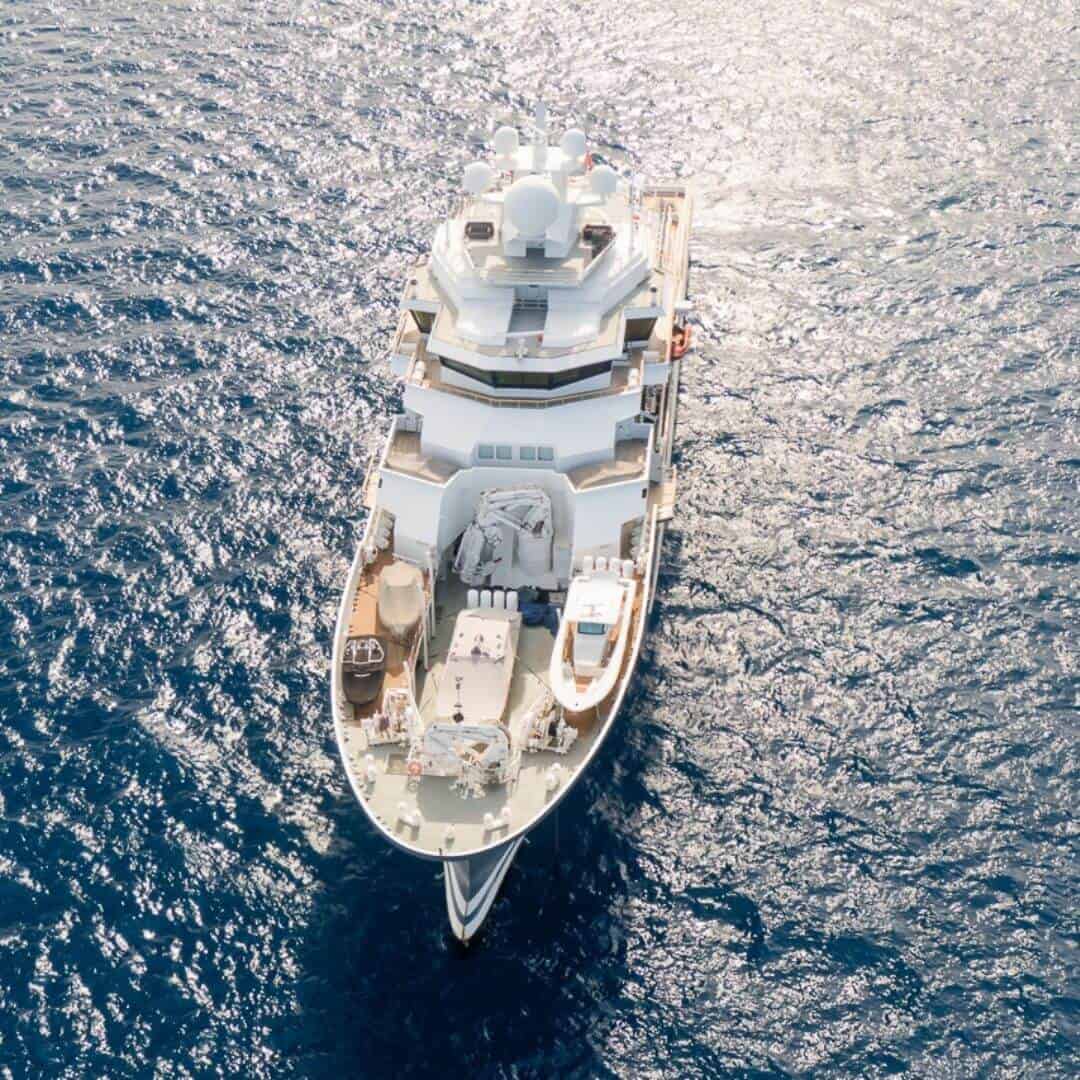 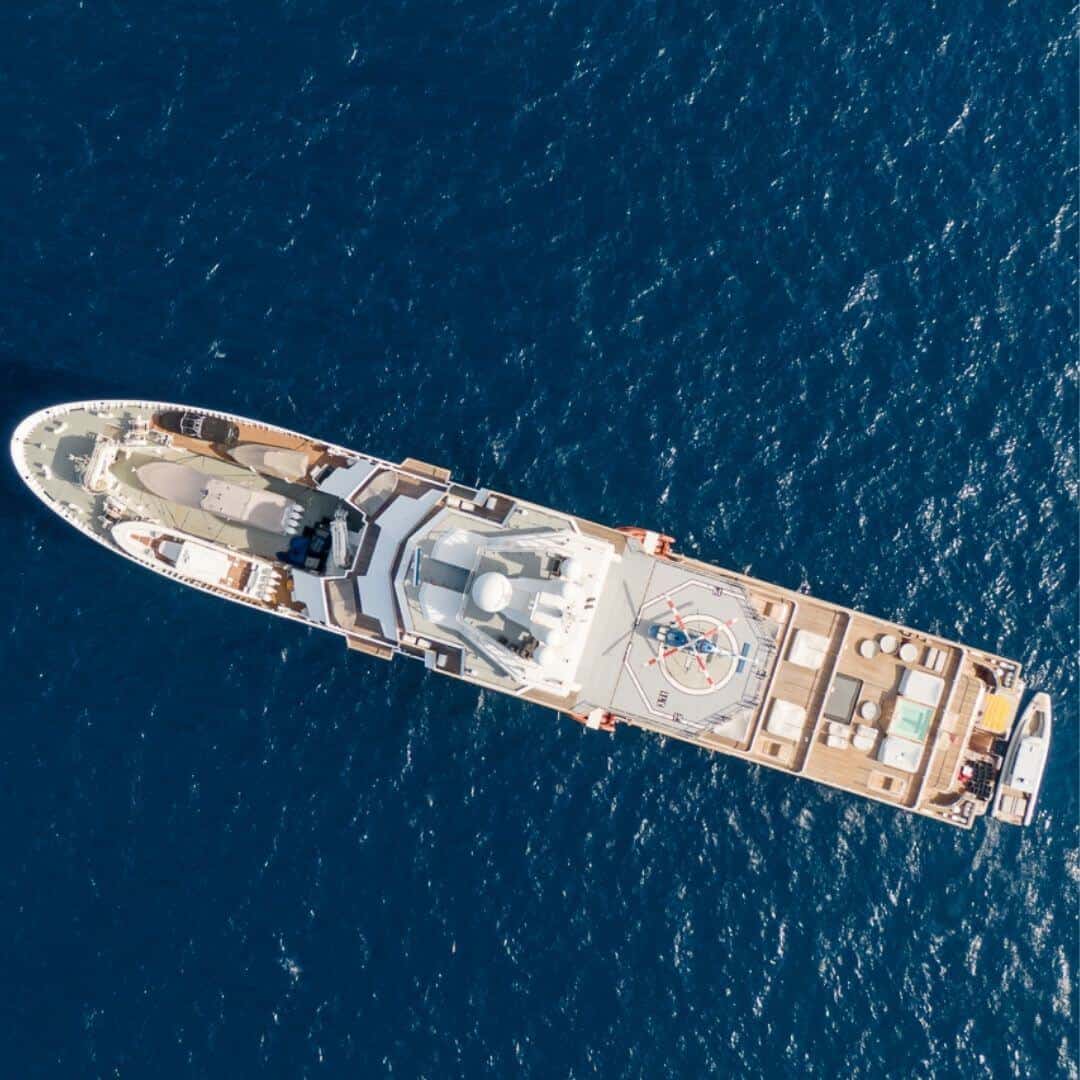 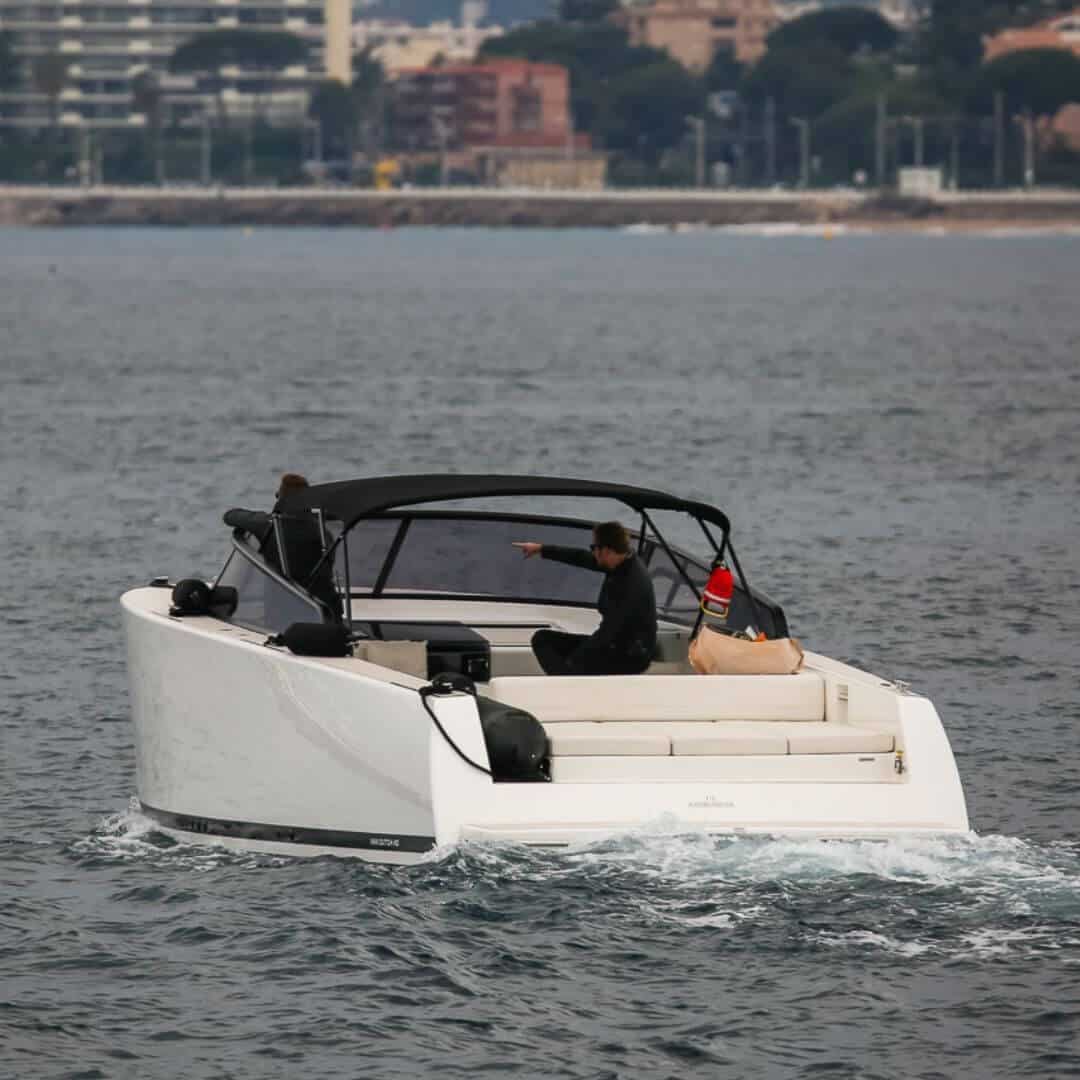 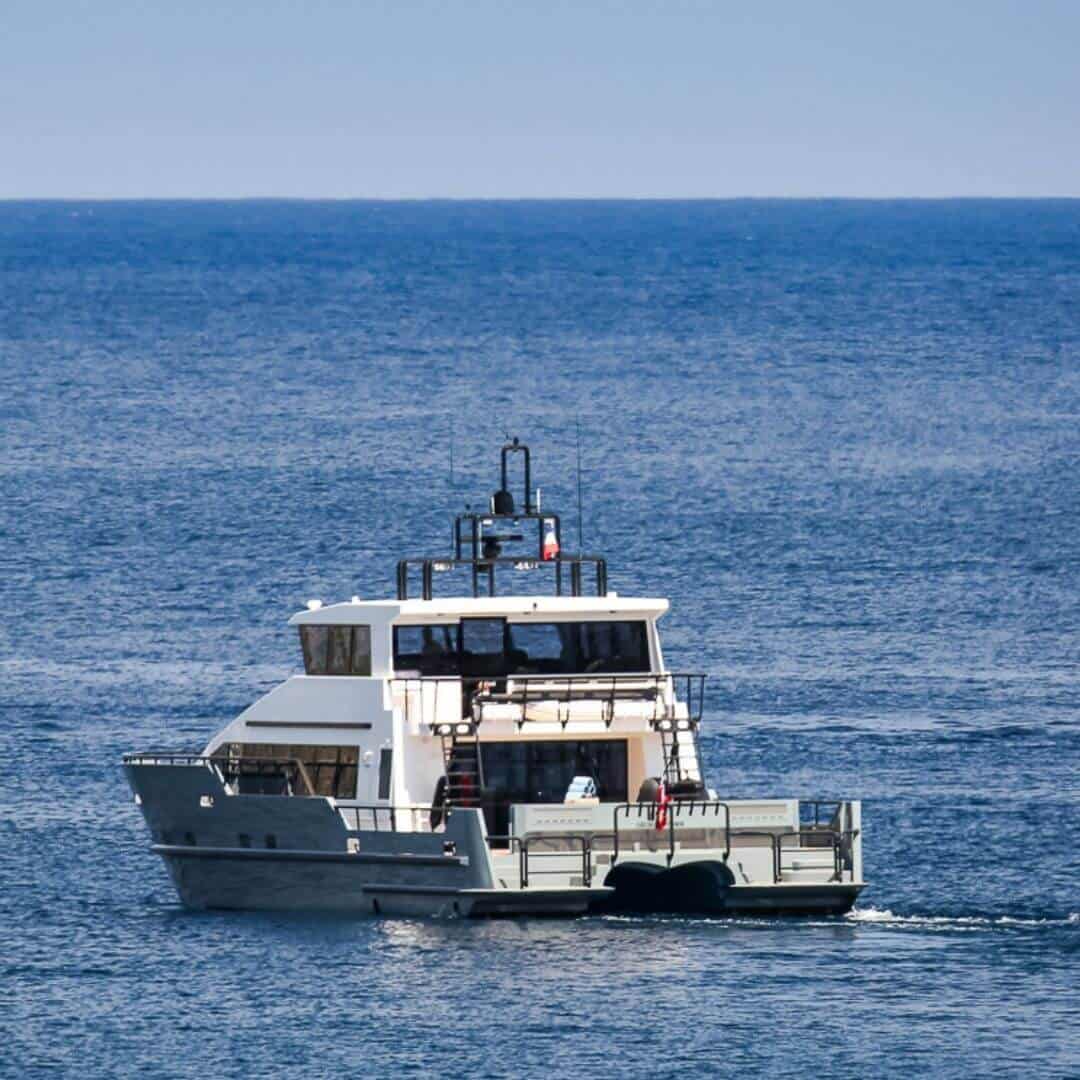 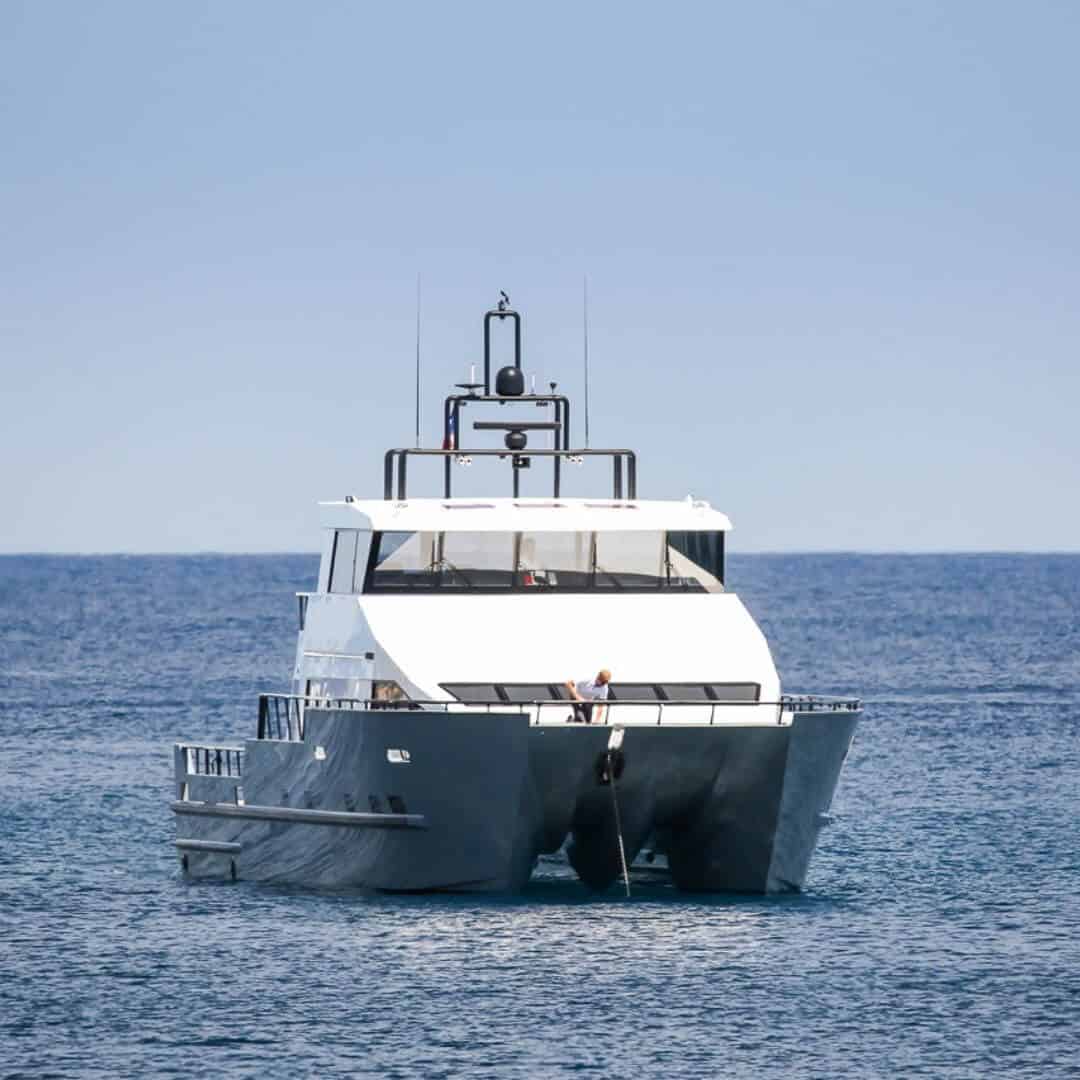 ANDROMEDA yacht was launched in 2015. This 107-meter-long beauty is one of the world’s biggest yachts. The exterior of the gorgeous sea vessel was designed by Oscar Mike Limited.

She was commissioned by Graeme Hart, a New Zealand billionaire, in 2015 and later sold to owner Russian-Israeli entrepreneur Yuri Milner. Hart approached Kleven to build a yacht that enabled an active boating lifestyle, which they delivered in 2015.

Designed by H2 Yacht Design, an English design house, the interior of the ANDROMEDA yacht is modern and luxurious. While the boat’s features may be rugged, the interior reflects a more relaxed atmosphere with light pastel colors.

The ANDROMEDA yacht is spacious, with accommodation for 30 guests in 15 staterooms. She is equipped to accommodate 30 crew members. She is classed as an expedition yacht and has a wide variety of features that make her robust for exploring.

She has a swimming pool, a helicopter landing pad, a hangar, a garage full of land and water toys, and two specifically fitted cranes to stow the 21m(68.9ft) custom tender aboard. The ANDROMEDA is highly equipped for an active lifestyle.

The ANDROMEDA yacht is built with a steel hull and aluminum superstructure with teak decks. Oscar Mike designed the exterior, and Marin Teknikk delivered the naval architecture. The build was executed by Norwegian shipbuilders Kleven in 2015.

The ANDROMEDA is the first private superyacht to be built at their shipyard.  She was refitted in 2017.

The rugged exterior was designed for long-range passages in difficult sea conditions, which sets her apart from other superyachts.  She is ice-classed to cope with extreme conditions.

The ANDROMEDA cruises at 15 knots and reaches a maximum of 16 knots. She is in the top 5% by LOA globally and is one of 58 motor yachts measuring over 100m in length. She has a $15 – $25 million running cost every year and has a Passenger Yacht certification.

The luxury expedition yacht was constructed for New Zealand billionaire Graeme Hart under the name Ulysses.

She was then reportedly sold to Yuri Milner in 2017 under the name ANDROMEDA. Yuri Milner is a Russian-Israeli entrepreneur, venture capitalist, and physicist.

He has been lauded as Russia’s most influential information technology investor and has a net worth of $4.8 billion.

Hart played a role in the design of the ANDROMEDA, as he required that the ANDROMEDA be fully equipped for an active yachting lifestyle.

He has a net worth of $8.6 billion. After selling the ANDROMEDA, he commissioned a larger explorer yacht from Kleven, measuring 116m(380.6ft).