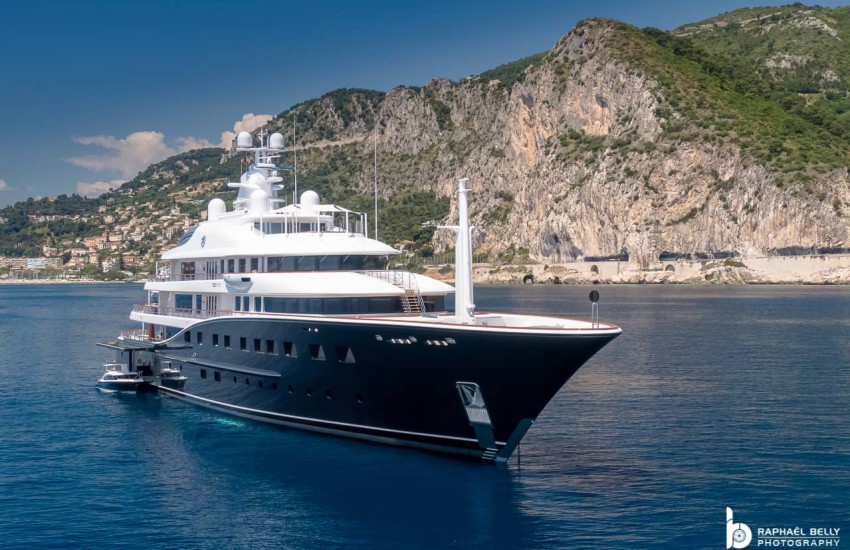 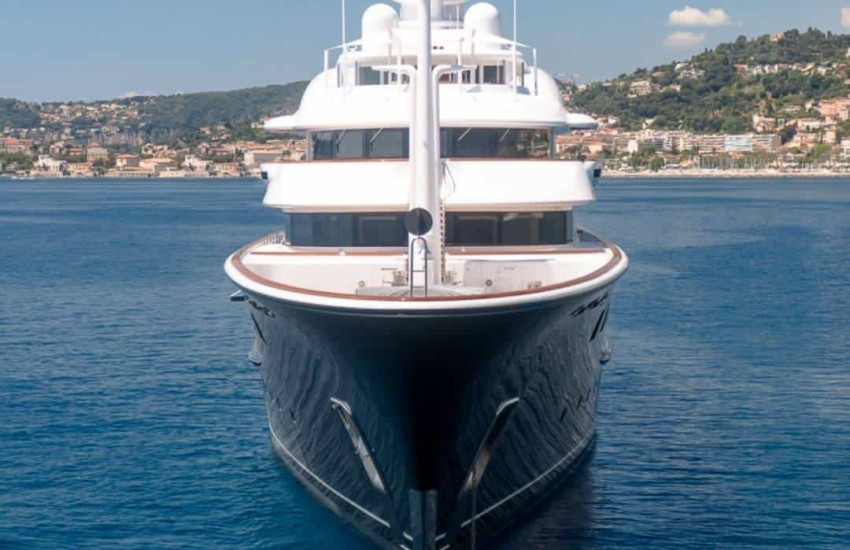 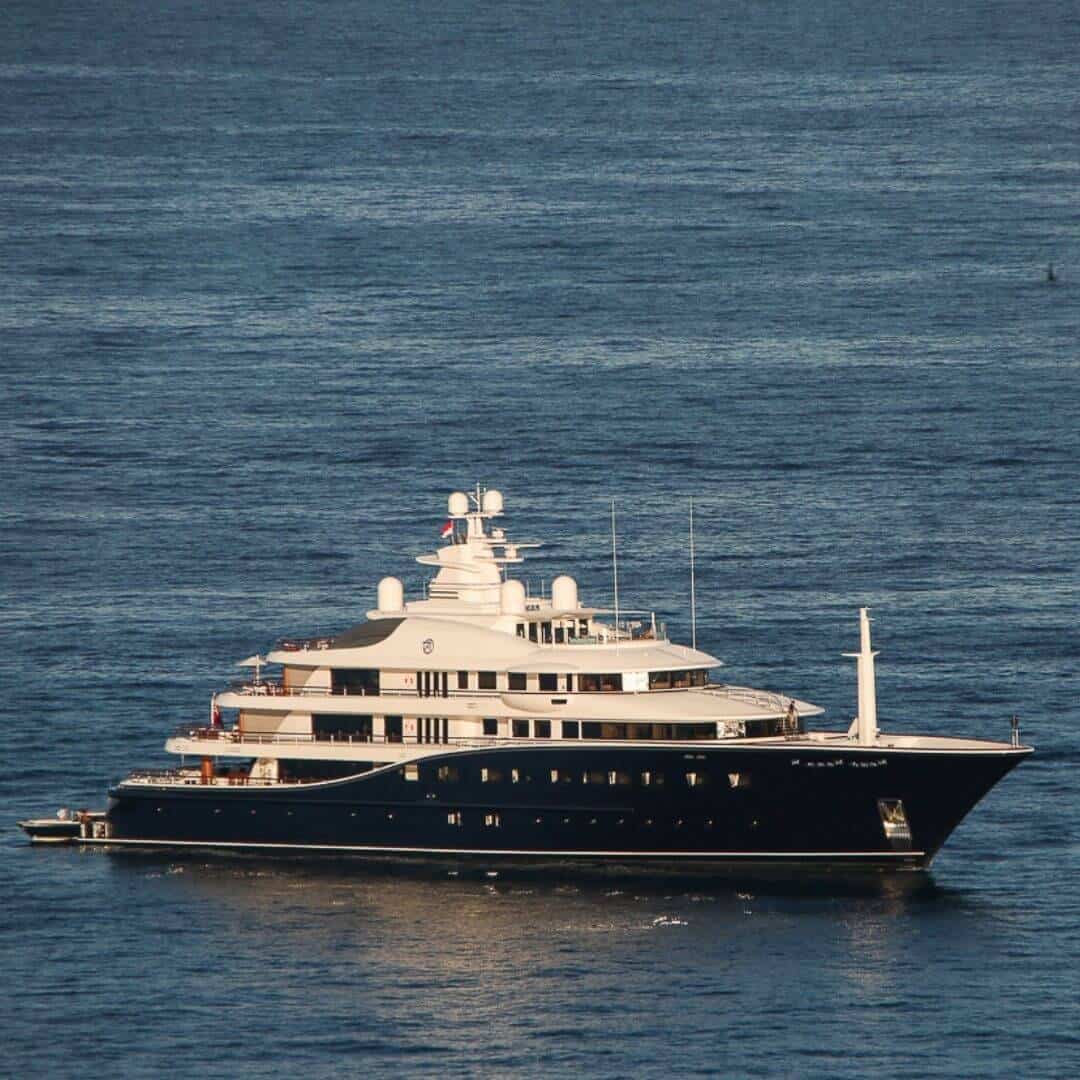 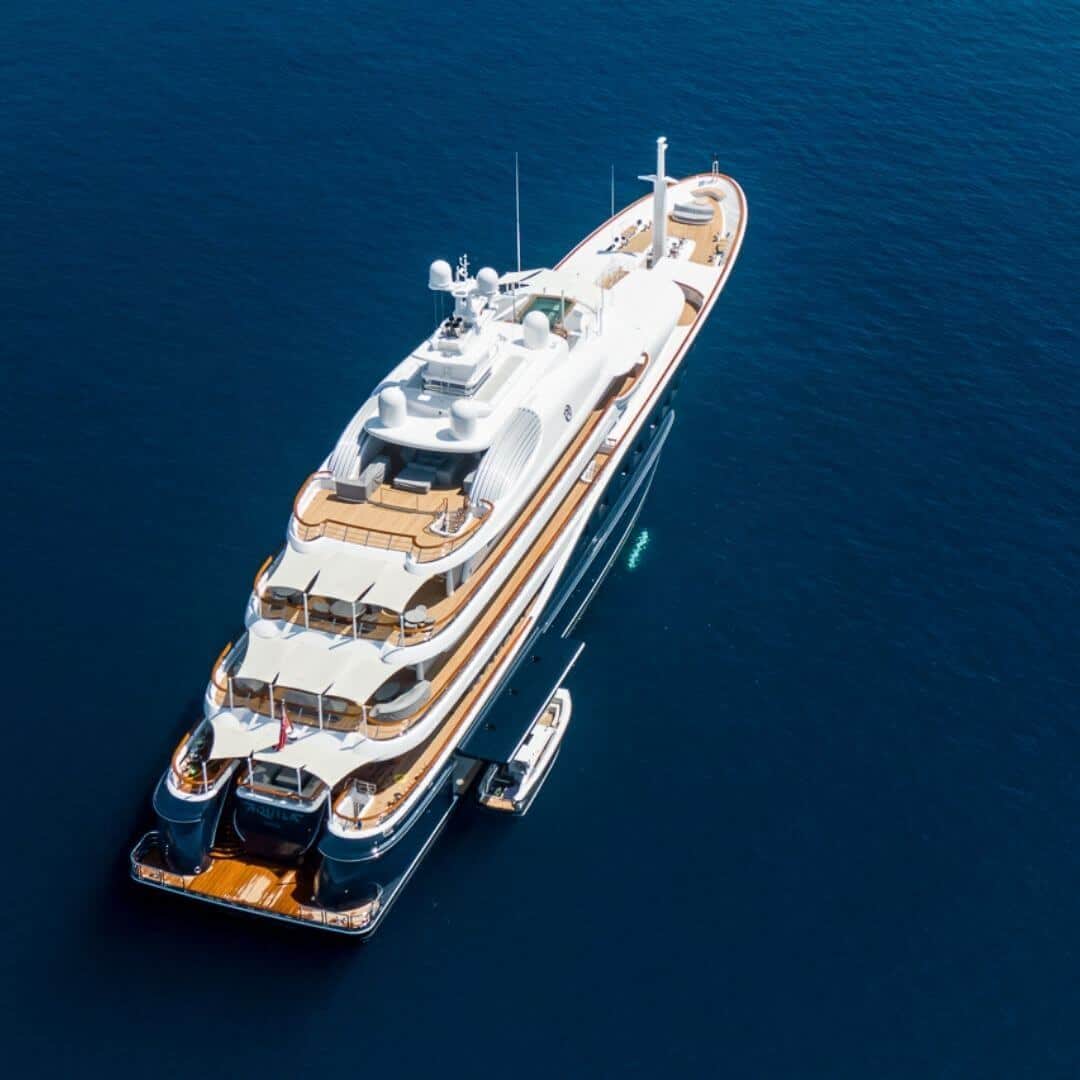 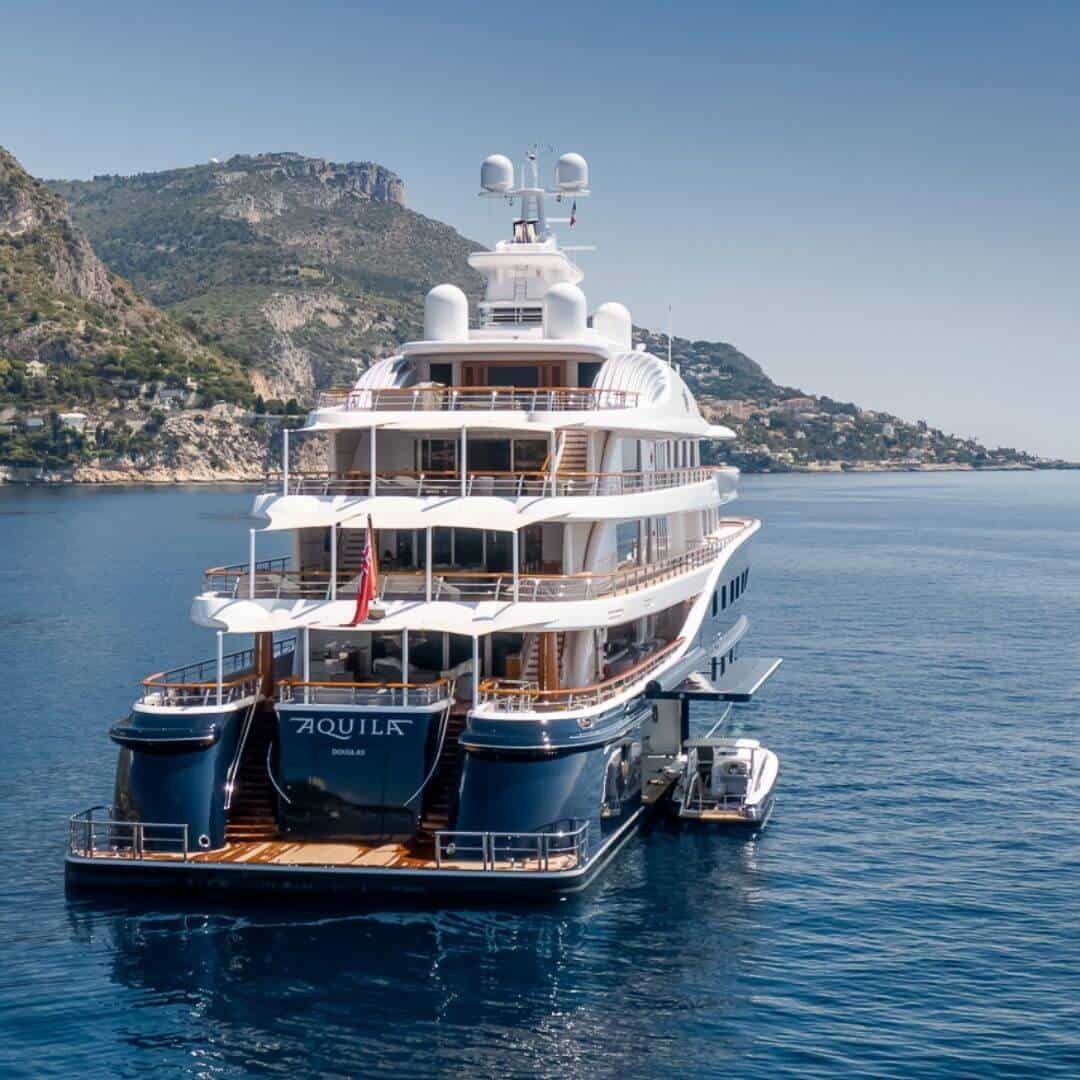 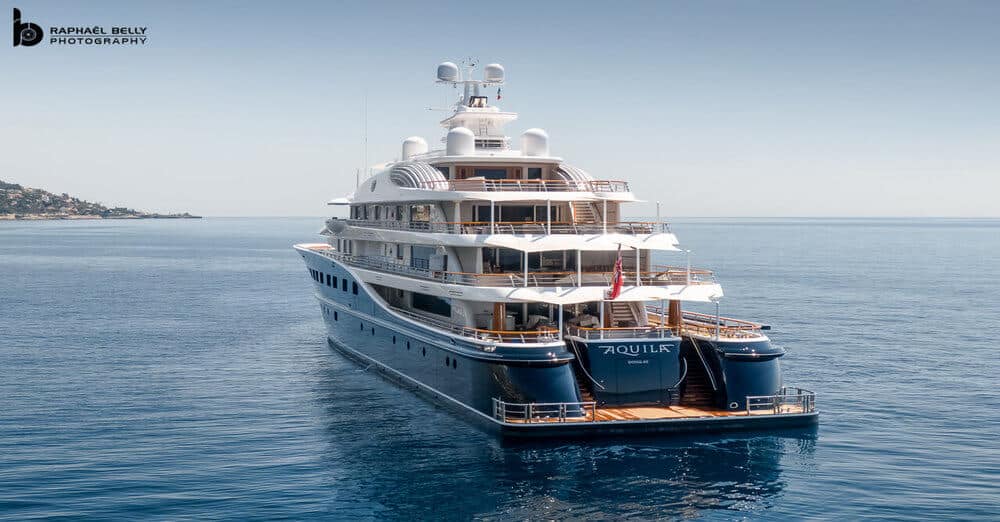 AQUILA yacht is a beautiful 85.6-meter (280.11 ft) yacht built by Derecktor and launched in 2010. She can welcome up to twelve guests in seven cabins as well as an additional twenty-six crew members.

The owner of the AQUILA yacht is Ann Walton Kroenke, an heiress of the Walmart fortune who purchased the yacht in 2014 for a total price of US $150 million.

The American design firm Dalton Design worked on the original interior of AQUILA (then CAKEWALK yacht) before she was launched in 2010.

After being sold in 2014, the new owner of AQUILA, Ann Walton Kroenke, chose to have the yacht refitted, completely gutting the interior and replacing it with new furnishings.

The new interior design of AQUILA was developed by Redman Whiteley Dixon (RWD) and Susan Young Interiors, perfectly marrying the concepts of naval and interior design.

The refit took more than twelve months, and a total of 1,000 workers were involved in the process.

Her interior perfectly combines luxury with style by including dark, wooden elements as well as light marble and silver details.

A contrast is created between the classic design of the common spaces with dark features and the more neutral, black-and-white staterooms.

Strategic pops of color complement this luxurious interior design and make her stand out.

The yacht has space for twelve guests in seven staterooms, including a spacious owner’s suite, four VIP cabins, a twin cabin as well as an additional bunk cabin. Twenty-six crew members find space below the deck in staff accommodation.

AQUILA has a beautiful spa area with a massage room and a dedicated hair salon, as well as a fully equipped gym.

There is also a cinema room with an 85-inch screen (2.15 meters) and plenty of indoor dining or entertaining space for hosting events.

One of the most notable features of AQUILA is her 11.2-meter (36.7 ft) chandelier that stretches across all four levels of the yacht’s interior.

The owner’s suite includes a 60 square meter (645 square foot) private deck with beautiful views over the bow of the yacht.

There are separate his and hers ensuite bathrooms and a connected study that allows for work to be completed even when the yacht is underway.

She weighs a total of 2998 tons and is powered by Diesel MTU engines allowing her to reach top speeds of 18 knots and an average cruising speed of 15 knots.

AQUILA was constructed by Derecktor shipyards in 2010, making her the largest private superyacht built in the United States since the 1900s.

The exterior of the AQUILA yacht (then CAKEWALK) was initially designed by the award-winning superyacht designer Tim Heywood in 2010.

After the yacht was sold to Ann Walton Kroenke in 2014, AQUILA underwent an extensive refit that targeted both her interior and exterior.

She was sent to the British shipyard Pendennis for renovation and repairs, including an upgrade of the communications system and an overhaul of the yacht’s superstructure. A large jacuzzi was added to the forward sundeck, and several new tenders were purchased.

AQUILA now features an infinity-style swimming pool, four spacious decks, a day bar, and even a dedicated party space complete with a DJ booth and light show. The yacht carries an array of water toys and equipment, making her perfect for extended charter trips.

For land excursions she carries mountain bikes and even scooters, allowing her guests to be flexible when exploring new places. Her three tenders can comfortably carry passengers from and to land and make up for the lack of a helipad on board ALQUILA.

The largest onboard tender measures 11.7 meters (37.1 ft) and has an impressive maximum speed of 50 knots. Having been awarded The ShowBoats Design Awards for tender design in 2010, this is one of ALQUILA’s most prominent features.

The AQUILA yacht is worth US $150 million, with annual running costs lying around US $10 to 15 million annually.

She was purchased by her current owner Ann Walton Kroenke in 2014 after being put up for sale in 2011, only one year after her launch.

The yacht was originally named CAKEWALK but was renamed AQUILA by her current owner. She appears to be available for charter for US $1 million per week, excluding expenses.

The owner of the AQUILA yacht is the Walmart heiress Ann Walton Kroenke, a niece of the company founder Sam Walton.

She inherited a considerable amount of Walmart stock from her father, Bud Walton, who passed away in 1996.

Her current net worth is estimated to lie at US $9 billion, although her family’s total net worth is as high as US $130 billion, making them the richest family in the world as described by Forbes.

Walmart was originally founded in 1962 and, over time has grown into a multinational corporation with more than 11,000 stores worldwide.

Ann Walton Kroenke is married to Stan Kroenke, an entrepreneur and the founder of Kroenke Sports and Entertainment.

The couple has four children and regularly take the AQUILA yacht on extended trips around the world.

The family owns the NBA team Denver Nuggets, and Kroenke is a major shareholder in the London football club Arsenal.

In addition to the AQUILA yacht, Ann Walton Kroenke and her husband are the owners of at least two private jets, including a 2011 Bombardier Global 6000 and a 2013 Bombardier BD100.