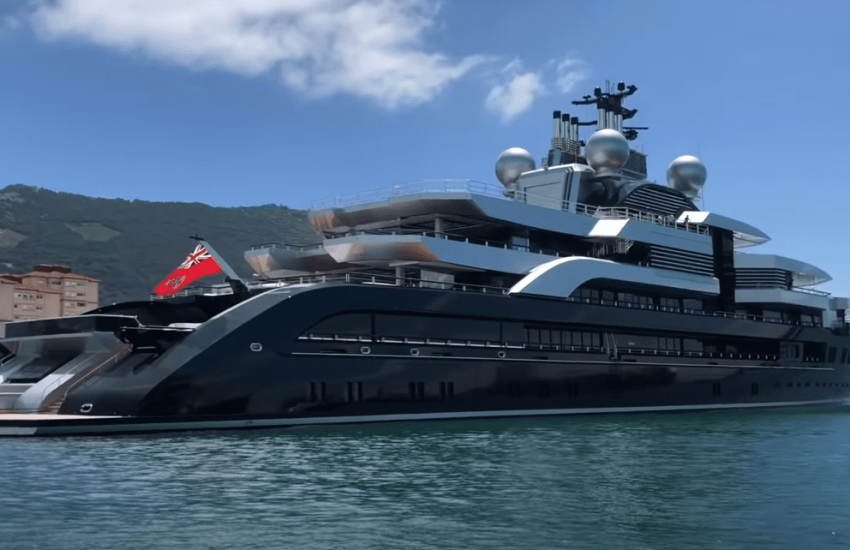 Despite her considerable price, the owner is unknown and his identity has not been released to the public after her purchase.

CRESCENT is currently considered 19th on the list of largest yachts in the world and the 11th largest ever built by Luerrsen.

The nature of the interior and the exact layout are unknown, and only speculations and estimates are available.

It is assumed that CRESCENT includes a sizable gym, several swimming pools, a movie theatre, spa facilities, a beauty salon with several rooms, and an outdoor barbecue.

Wifi and air conditioning as well as a large elevator are also available aboard the superyacht.

The renowned French design house Zuretti was responsible for developing an extravagant interior design for the motor yacht CRESCENT.

They specialize in custom projects and have worked on a variety of luxury vessels in the past.

Their trademark style combines classic elements with contemporary features which is what CRESCENT’s interior most likely looks like as well.

According to the renowned manufacturer this style was chosen in accordance with the owner’s wishes.

Due to her size, she is estimated to have at least three major salons and most likely very spacious cabins.

CRESCENT has a distinct absence of open-air space since most of her decks are permanently covered.

Her pools and jacuzzis are all located in shaded areas and not visible from passing boats or from the air.

The only exception is a medium-sized pool located in a somewhat hidden spot on the aft deck. At least one of her pools is said to feature a custom-made glass bottom.

The exact layout of her cabins isn’t known, however, CRESCENT features a sizable master suite with panoramic views.

She can host up to 18 guests in an estimated 9 cabins and has space for a crew of 40 members.

One of the few publicly known features is her large glass atrium which spans three separate floors.

This impressive structure has a tinted glass front and can be seen from both her starboard and port side.

Across the entire yacht, a state-of-the-art entertainment system has been installed, including large tv screens in all bedrooms and salons as well as a modern audio system.

CRESCENT displaces an incredible 9.194 tons making her one of the largest yachts in the world by weight. Even for her length of 135.50 m (445 ft) this is impressive.

Her top speed lies somewhere around 18 knots, although she tends to cruise at 12 knots which is reasonably fast considering her gross tonnage.

CRESCENT sails under the Cayman Islands flag, which is one of the most popular in the world for superyachts.

Although the exact details of her sale from Luerssen are unknown, she is rumored to have cost US $600 Million with average running costs of US $25 to $50 Million every year.

She was constructed at the Lemwerder shipyard, which lies close to the city of Bremen in Germany. Since CRESCENT is currently in private ownership, she is not available for charter or for sale.

The Norwegian naval architect and designer Espen Oeino worked on CRESCENT and developed her eye-catching exterior.

Unlike the majority of large yachts, she is not white, which makes her stand out even more, especially when docked in popular harbors across Europe.

The secrecy surrounding her owner and interior has made her a popular target for yacht spotters, although there are still very few photos available of this magnificent vessel.

The exterior of CRESCENT is a dark navy blue, and the upper stories feature a silvery chrome color.

Her design has been described as masculine and muscular in the past, with a modern approach to traditional yacht layout that appears especially striking.

She has a large aluminum superstructure and a total of four decks. Guests have their choice of two helicopter landing pads, one located on the bow of the vessel and the other on the top deck.

The latter is equipped with a retractable helicopter hangar which can be extended to cover a small aircraft if needed.

This is a unique feature that cannot be found in very many other superyachts. It’s yet another example of the high levels of privacy that this yacht offers for its anonymous owners.

It goes without saying that a modern yacht such as CRESCENT is equipped with state-of-the-art zero-speed stabilizers.

On the lower aft deck, she has a generous beach club area with a large swimming platform and an adjacent pool.

However, unlike many other superyachts, this area cannot be closed off when the vessel is underway.

At night CRESCENT is illuminated by an advanced underwater lighting system that was tailor-made for the yacht. She carries at least three tenders, although their make and type are not known.

The owner of CRESCENT is not currently known. The yacht was delivered to them in September of 2018, but their identity was kept secret and not released to the public.

During her construction at Luerssen, Germany, CRESCENT was known as PROJECT THUNDER and the entire process took more than 24 months.

She was first launched in Bremen, Germany, where the majority of her construction took place, for sea trials in the North Sea.

She sailed to Hamburg, where Luerssen’s Blohm + Voss facilities are located, to complete her construction and finish the interior before returning to Bremen in time for her delivery in September of 2018.

In May of 2019, she conducted her maiden voyage through the Mediterranean, stopping briefly in the port of Gibraltar before moving on to the Italian coast. She had previously spent the winter months in parts of Norway.