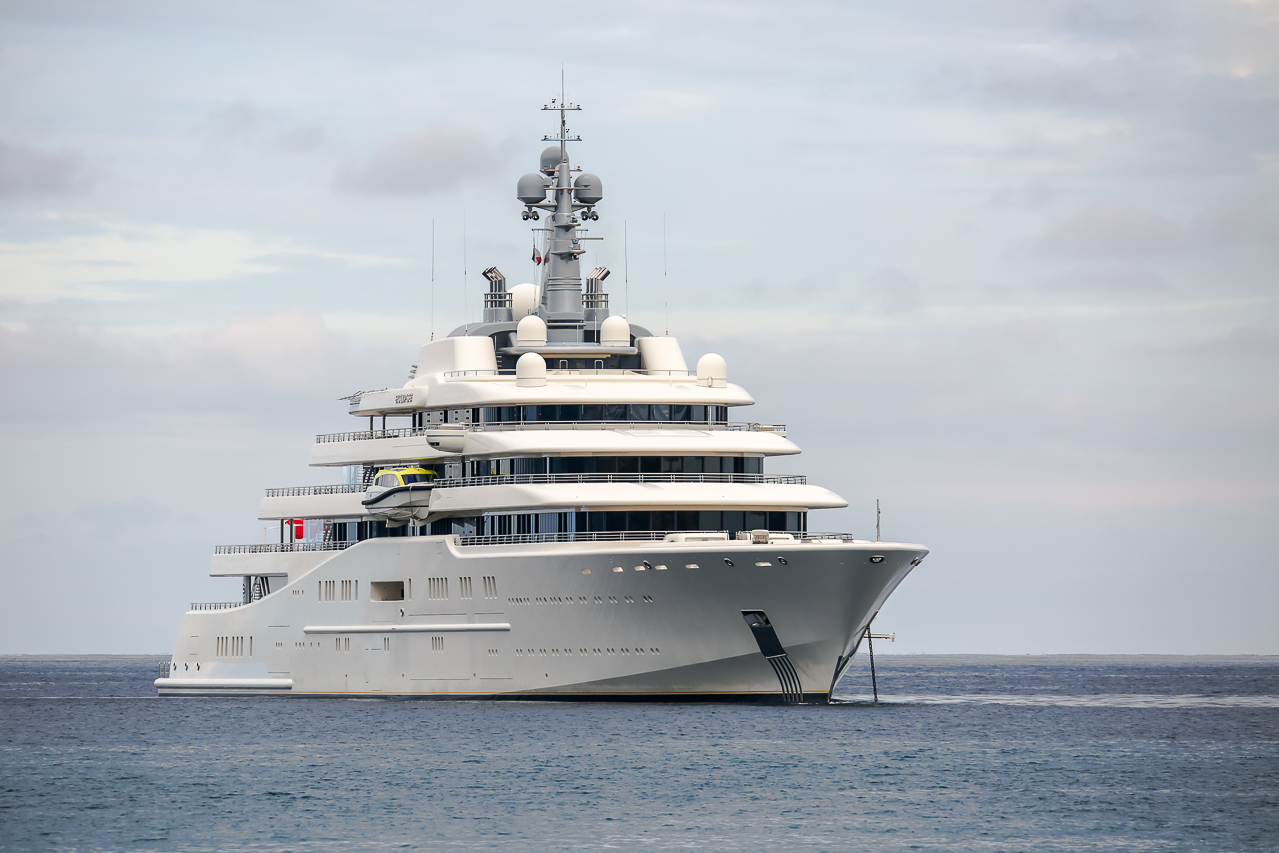 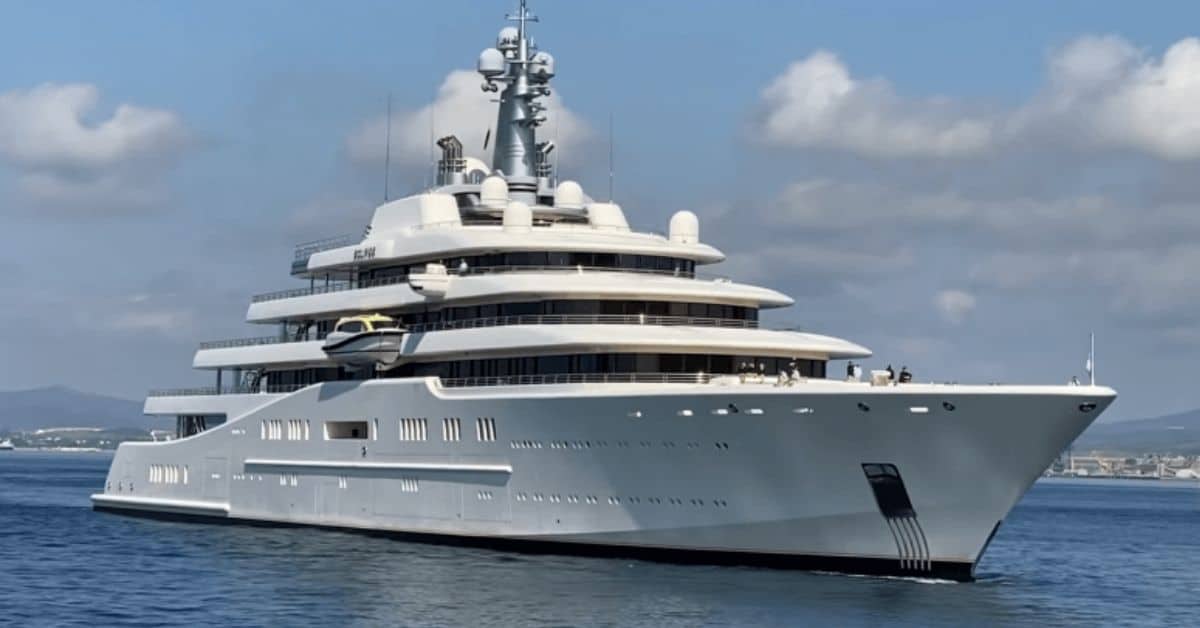 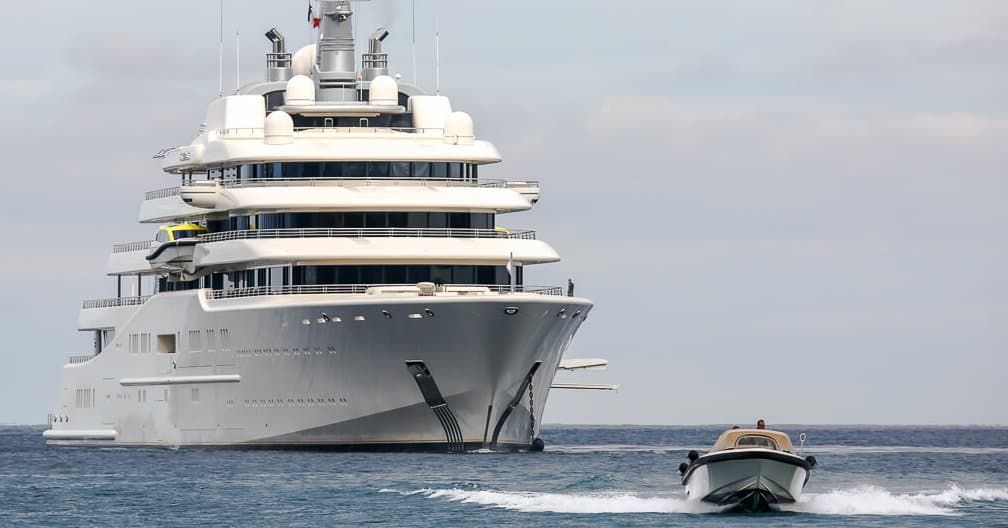 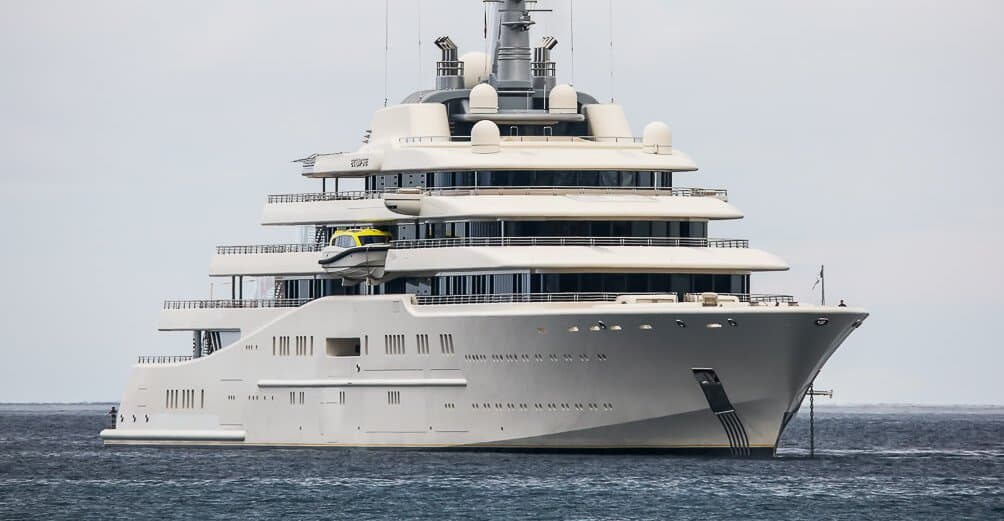 The ECLIPSE yacht was once the largest yacht in the world at an impressive length of 162.5 meters (533 ft) but currently ranks in second place after AZZAM.

Though she is known as the billion-dollar yacht, it is estimated that her true value lies between US $500 – $700 million. The vessel can host 36 guests and is even rumored to feature a state-of-the-art anti-paparazzi system to protect the privacy of those on board.

The interior (and the exterior) was designed by Terence Disdale, who has become one of the top names in the industry despite having no formal design education.

ECLIPSE was his largest project to date, and he also worked on prominent vessels such as A+ and AL SALAMAH.

The interior of ECLIPSE is classically designed in a style that is to be expected from one of the largest yachts in the world. The upholstery and furniture follow a beige and crème color palette with wooden accents.

The yacht’s 18 cabins can welcome 36 guests as well as 70 crew members, which is an unusually large number even for a vessel of this size. A large dance floor, several fireplaces, two swimming pools, and two helipads are also included onboard.

The ECLIPSE yacht interior is so large that there is even a cinema dedicated exclusively to crew members. In 2015 the interior of ECLIPSE was refitted by Blohm and Voss in Hamburg.

Four MTU engines power ECLIPSE and allows her to reach top speeds of 25 knots, although her average cruising speed lies at 22 knots. Her total volume lies at 13564 tons making her not only one of the longest but also the heaviest yachts in the world.

Like the interior of ECLIPSE, the interior was designed by Terence Disdale. According to rumors, Abramovich fitted her with an anti-paparazzi system that detects electronic light sensors from digital cameras. However, there is no proof of this, although many newspapers report its existence.

ECLIPSE is so large it can almost be compared to a large cruise ship. On deck are several swimming pools and jacuzzis, and the aft of the vessel features a sizeable beach club. The yacht has a sleek design that attests to Terence Disdale’s classical style.

ECLIPSE came to fame as being the most expensive yacht ever built at the time for an approximate price of US $500 million.

She has seen further improvements since her purchase by Abramovich in 2010 and it is often widely reported that she is worth US $1.2 – $1.5 billion.

Though it is hard to give an exact figure of her price today due to the fact she has only ever been owned by one person, it is estimated that her value is closer to US $500 – 700 million.