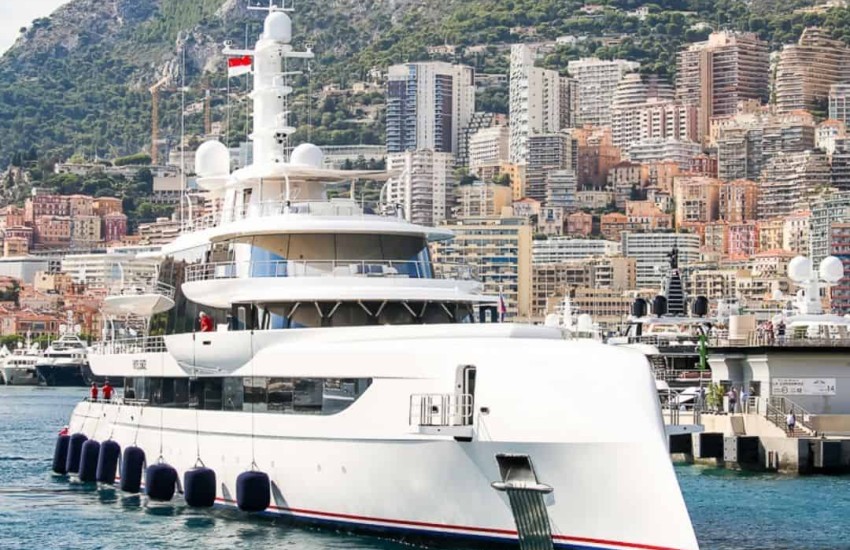 EXCELLENCE yacht is one of the largest superyachts in the world with a total length of 80 meters (262.5 ft). She is often considered a masterpiece of design with her unusual reversed bow and was delivered to her owner Herb Chambers in 2019.

The interior of EXCELLENCE was designed by Andrew Winch, an English yacht designer specializing in the luxurious and unusual design. The yacht perfectly combines indoor and outdoor living with her three-story glass atrium that allows the interior to be bright and open.

Fourteen guests find space on board in seven cabins, as well as a crew of 20 who have a designated area below deck. The interior of the yacht is decorated in beige and creme tones, perfectly complimented by dark wooden elements.

There is a cinema, spa with a sauna, and gym aboard EXCELLENCE and the aft of the vessel holds a large beach club with direct water access.

EXCELLENCE is the 7th largest yacht built by ​​the renowned German shipyard Abeking & Rasmussen. Her exterior was designed by Andrew Winch, who also worked on the interior of EXCELLENCE.

Her most unusual feature is definitely the reversed bow that is sure to catch the attention of onlookers anywhere she docks. She has plenty of deck space that can be used for sunbathing or covered up with awnings if required.

On the main deck, a pool with a swim-up bar allows guests to relax and unwind. EXCELLENCE has a sizeable aluminum superstructure and an elongated steel hull. She has unusually large windows which allow the interior to be flooded with natural light.

Herb Chambers bought EXCELLENCE for a price of US$120 million in 2019. She generates annual running costs of US $5 to 12 million depending on use.

The owner of EXCELLENCE is Herb Chambers, an American billionaire businessman and owner of the Herb Chambers Companies, a group of successful car dealerships. His net worth is estimated to lie at US $1.4 billion, and he passionately collects rare cars.

EXCELLENCE is actually Chamber’s sixth yacht, all of which have carried the same name. His extensive experience in the yachting world aided him in making the current EXCELLENCE a true masterpiece of design.

All but one of his previous yachts have been sold and now bear the names ARIENCE, EMINENCE, DREAM, PRINCESS TOO and MISS ILOILO. He still owns a Feadship 150 and an OverMarine Mangusta 94 (both also named EXCELLENCE), which are based on the east coast of the United States.