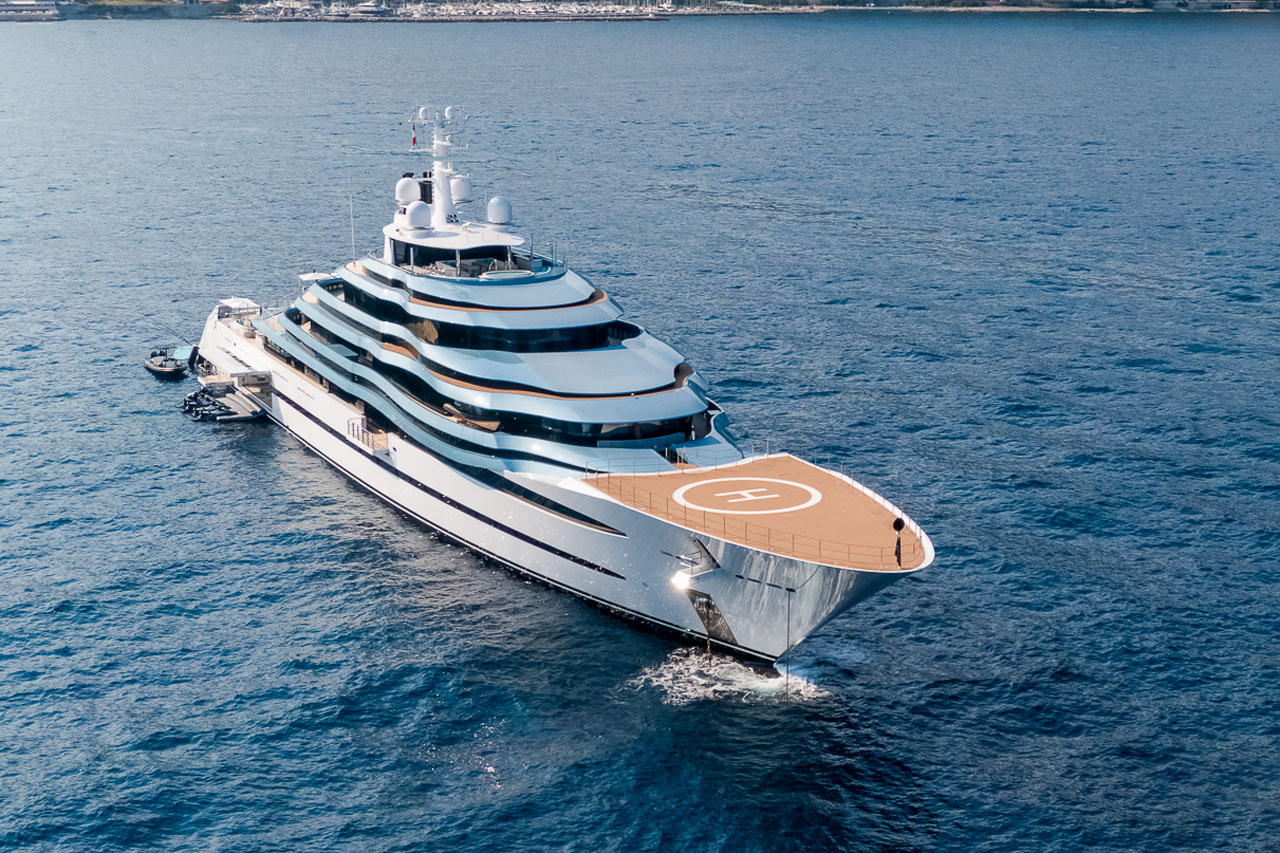 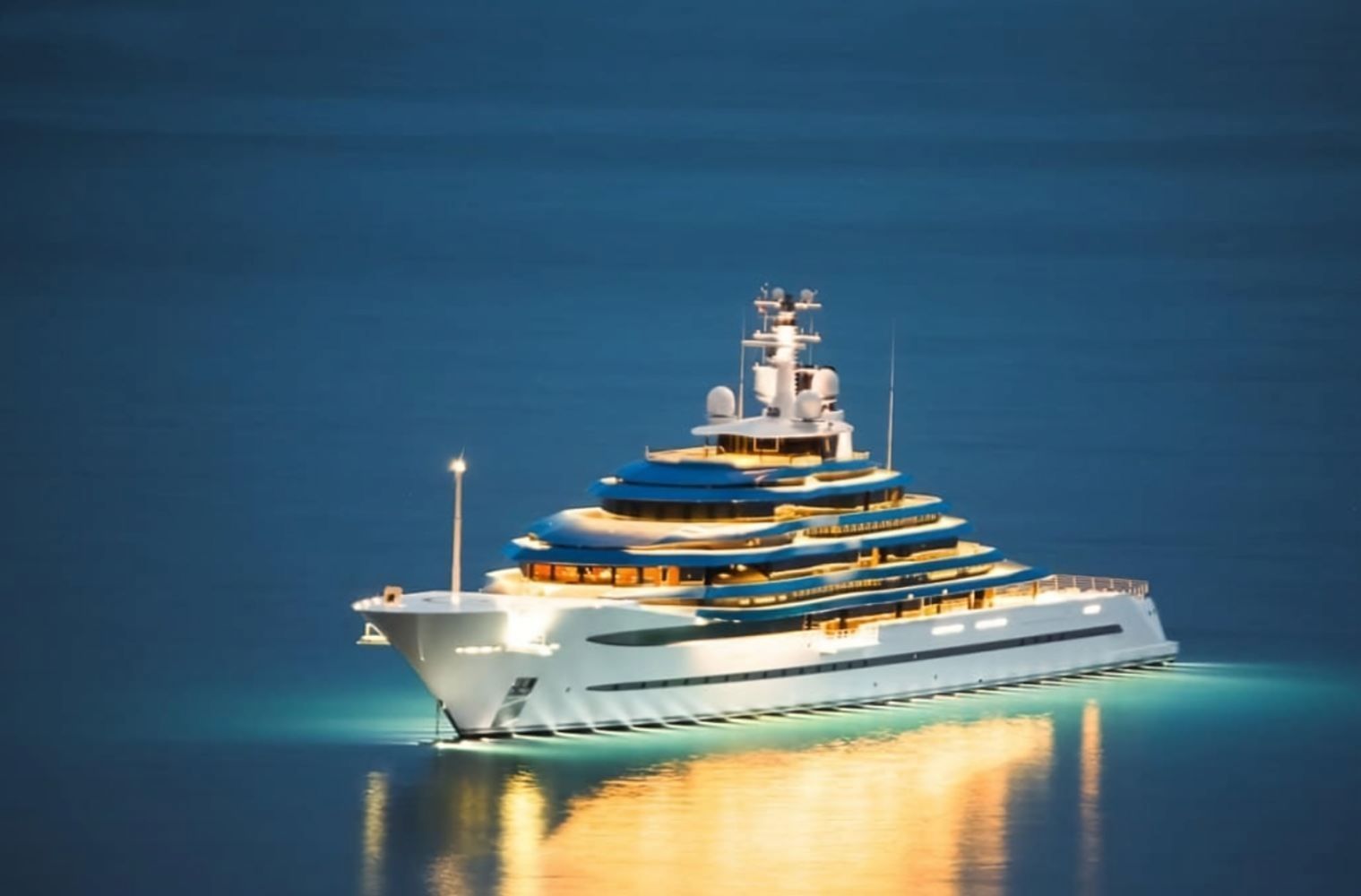 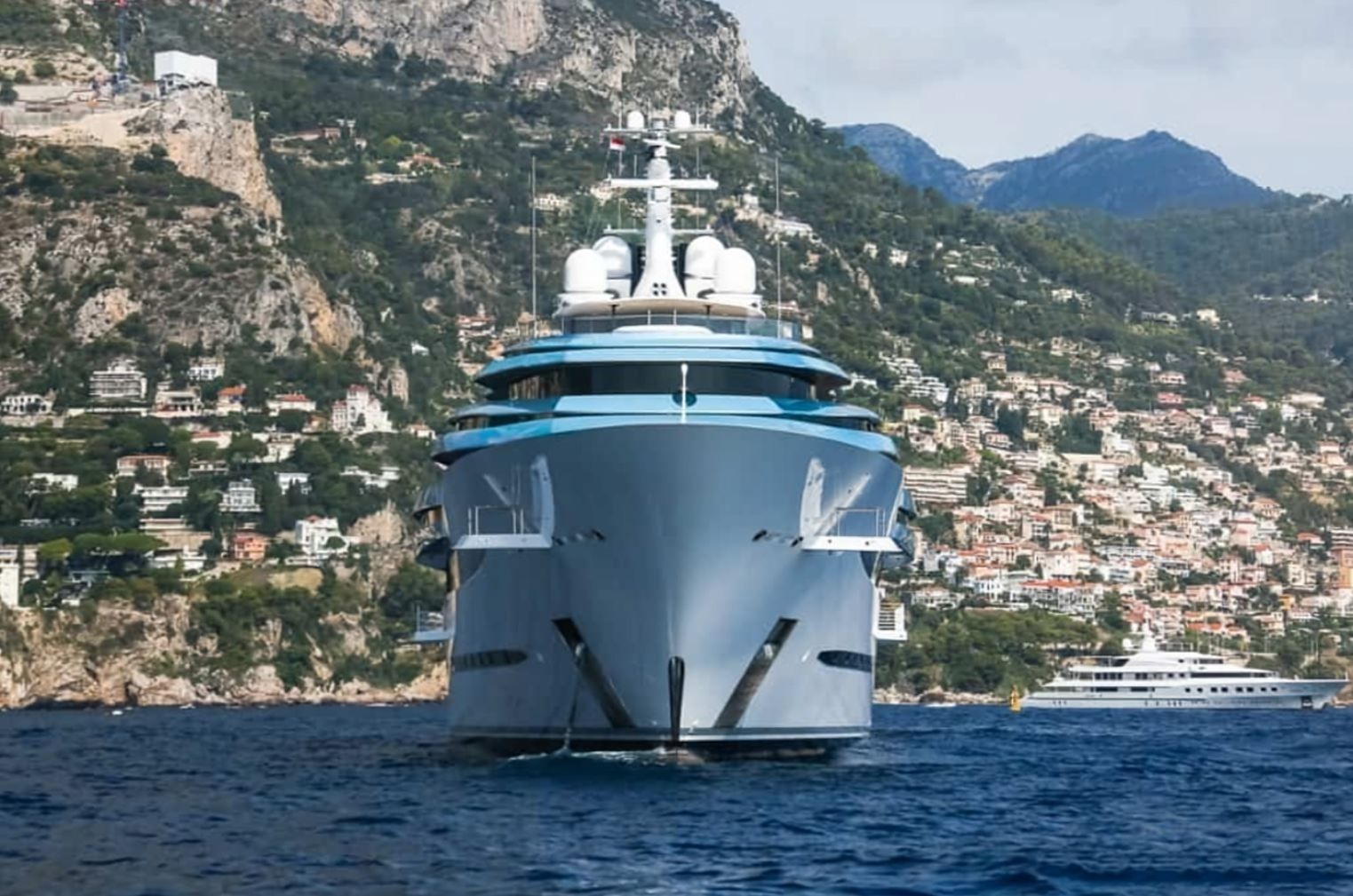 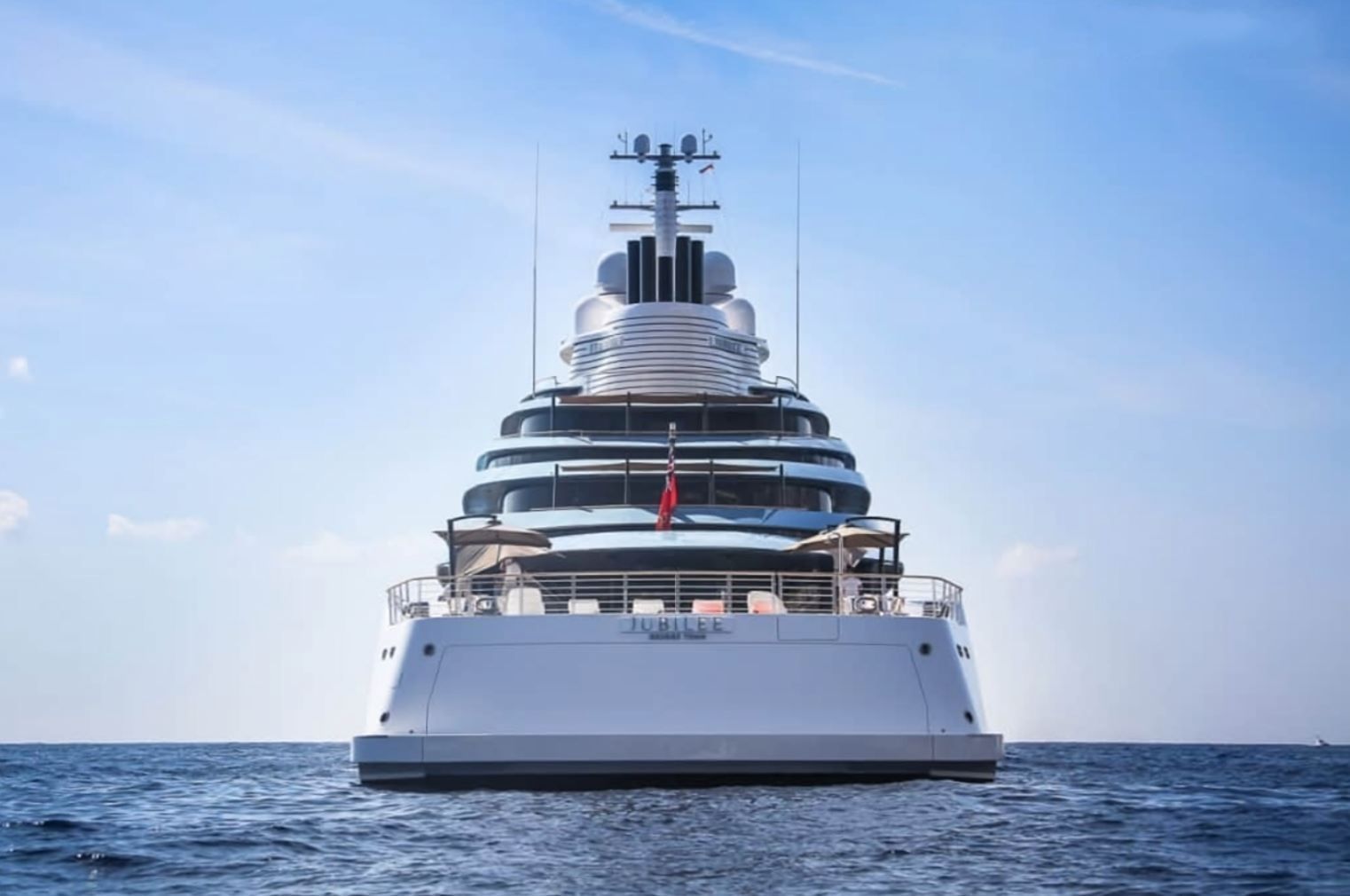 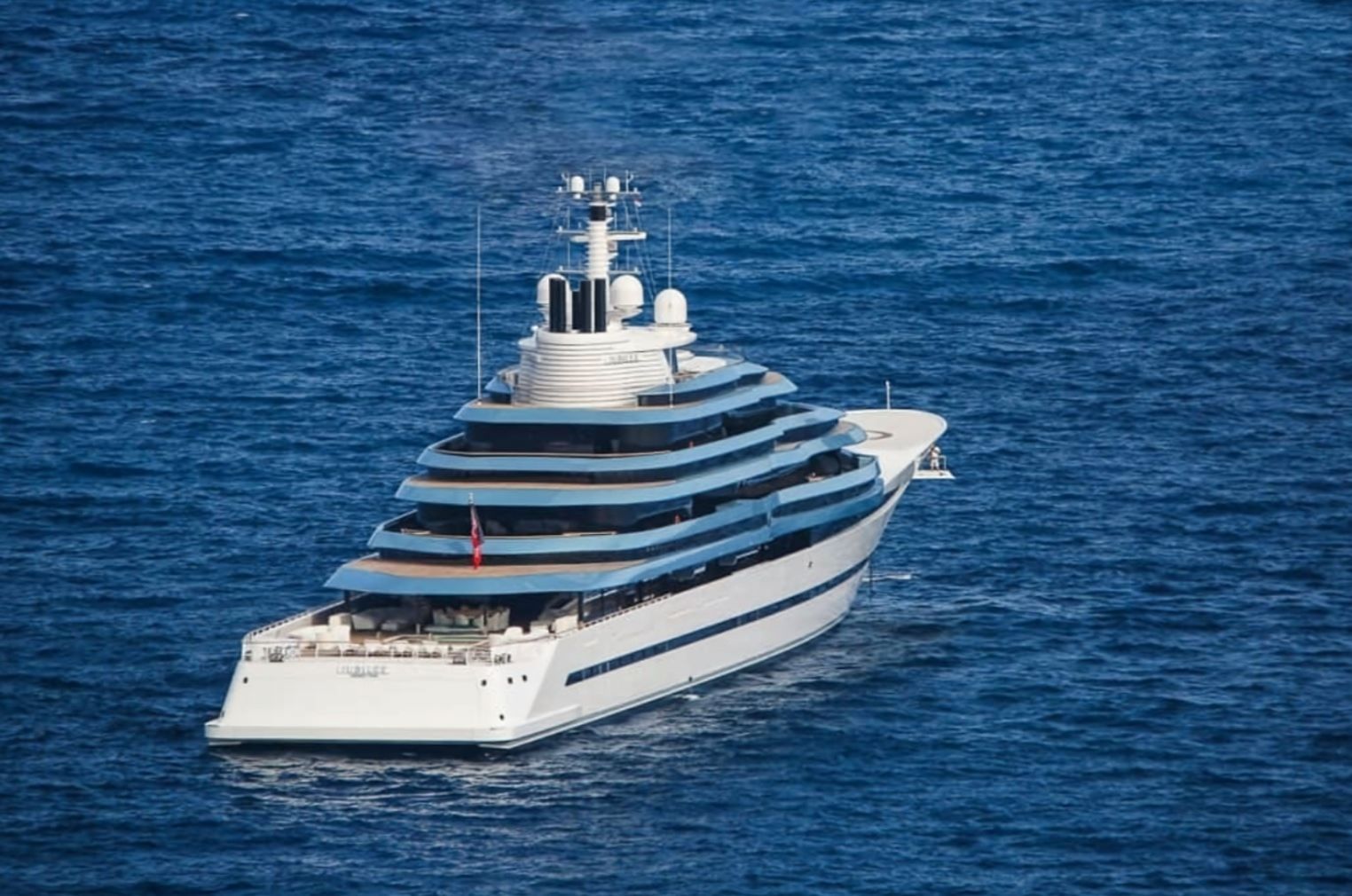 KAOS yacht (formerly JUBILEE and AL MENWAR) is an award-winning superyacht that was recently refitted with a completely redesigned interior. At 110 metres (361ft) and 4,523 tons, she was the largest yacht ever built in the Netherlands at the time of her launch in 2017.

The vessel was recently spotted off the coast of southern Spain before dropping anchor in the beach town of Marbella.

The vessel was made completely wheelchair accessible including elevators and barrier-free accessibility to all decks.

In 2020 the new owner of KAOS had the entire yacht refit and redesigned at Luerssen in Hamburg Germany. The process took a year and with the help of the British designer Reymond Langton, the interior was transformed.

KAOS has room for 31 guests in 16 cabins. This includes a lavish owner’s suite which consists of two separate bedrooms. There are also four VIP suites and ten standard suites with ensuite bathrooms. All guest cabins are located on the upper deck.

KAOS was designed with maximum comfort in mind. Her interior includes lavish facilities such as a spacious elevator, a steam room, a full gym, as well as an indoor beach club.

Originally she was constructed with Middle Eastern design in mind which includes features such as a large majelis, which is a dedicated seating and entertainment area meant for hosting guests. KAOS also has a large cinema, a sauna and full spa facilities.

Below deck, there is a separate crew gym and a small hospital in case of medical emergencies.

The interior design can be described as lavish and luxurious. White and blue carpeted floors with intricate designs compliment the exterior of the vessel and its signature aqua colour.

Golden accents and cream upholstery go well with the wooden elements such as the teak flooring. Opulent furnishing with many indirect lighting accents create a feeling of coziness and luxury.

As expected from Oceano, she was constructed primarily from aluminium and steel and has a fuel capacity of 391,000 litres as well as a 230,000-litre freshwater tank. She is powered by impressive MTU engines fuelling two propellers.

KAOS can host 31 guests in 16 cabins as well as 45 crew in 24 cabins. Her maximum range is estimated to be somewhere around 5,000 nautical miles.

KAOS is an exceptionally beautiful yacht that was built prioritising modern and minimalist design. Lobanov Design is responsible for her eye-catching exterior, which focuses on futuristic elements combined with optical illusions.

Established in 2007, this design studio is known to be young, offering unique perspectives and modern approaches. She was built with curved lines in mind incorporating elements of glass and metal in a nautical context.

“The 3D modelling was quite a challenging task, which pleased my mathematical part of the brain. Each of the layers meets and splits under certain rules, which can be noticed from different angles.”

She has four decks, the largest of which is the aft which has a sizable swimming pool with a built-in aquarium and seating areas. Several smaller decks are located on higher levels, although most of them are hidden in shaded areas.

At the bow, a helipad is located, including refuelling facilities for small to medium-sized helicopter aircraft. Below the helipad, the mooring deck is cleverly concealed for aesthetic purposes.

At the stern of the vessel, KAOS has an extendable swimming platform that can be closed completely when the yacht is underway. This platform leads directly to a lounge area inside the yacht, complete with a state of the art entertainment system, TV and storage space.

KAOS also possesses a modern underwater lighting system and state of the art stabilisers for the comfort of guests when the vessel is underway or at anchor.

KAOS carries at least two tenders, one of which almost looks like a miniature version of the main vessel with the same blue and white design and tinted windows. They were built by Pascoe International, a renowned company specialising in tenders for superyachts.

She carries a wide array of water toys, including several jet skis, water bobs and paddleboards.

Originally KAOS was built in the Netherlands by Oceano under the name SECRET III. Upon her launch, she was officially named JUBILEE and then renamed AL MENWAR by the royal family of Qatar, the House of Thani.

The current owner then renamed her once again and gave her the name KAOS.

The House of Thani sold the motor yacht KAOS to it’s current owner with all the original furniture and equipment, including china, silverware and linen.