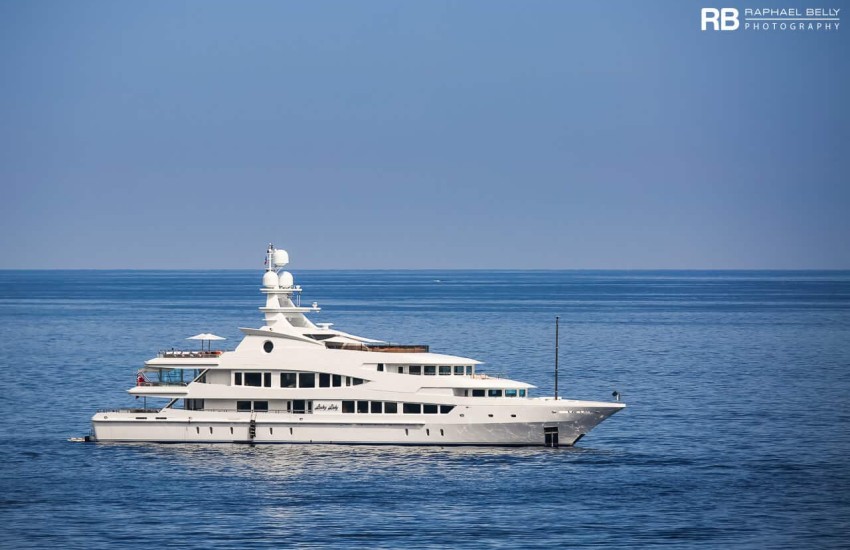 The LUCKY LADY yacht is a motor yacht built and delivered in 2002 by Oceanco in their Netherlands shipyard.

Launched two decades ago as Lady Lola, she was originally built for the late American newspaper publisher, Duane Hagadone.

Over the past twenty years, she has been refitted a few times, the last one five years ago.

An exquisite combination of Norwegian birch burl (from Norway), mahogany, and a color scheme with light tones and opaque hues, as well as Lalique crystal panels and gold flourishes.

She can accommodate up to 10 guests in five staterooms, comprising one master cabin, three double cabins, and one twin cabin.

The upper deck is fully dedicated to the owner, featuring a suite, private dining area, terrace, office, salon, and 270-degree views. She can also host up to 16 crew members on board.

If you are looking for relaxation and entertainment, LUCKY LADY has you covered. Her amenities include a jacuzzi, outdoor cinema, air-conditioning, gym, WIFI, beach club, retractable golf tee, and projector.

Probably one of her main attributes is her pool with a two-level waterfall, a feature seen for the first time on a yacht.

In 2017, she underwent a full refresh, having a completely new interior refresh.

The LUCKY LADY yacht features exterior design by The A Group and naval architecture by Oceanco.

She is built with an arctic white steel hull and aluminium superstructure design with discreet lines.

The superyacht has a Midnight Express Tender and a Novurania landing craft.

She is the 25th largest yacht ever built by Ocean, and one of the largest yachts in the world, ranked number 405th.

Some of her awards include the ShowBoats Awards 2002 for Best Full Displacement Motoryacht and the International Superyacht Society Awards 2003 for Best Power Interior.

She was built to comply with MCA and Lloyd’s registration, and currently sails under the Cayman Islands flags.

THE LUCKY LADY yacht is not listed for sale, but she was put for sale in 2015 for 49.9 million EUR. However, she’s currently available for charter.

Her summer cruising regions are France, Italy, Monaco, Amalfi Coast, Corsica and Sardinia. Her weekly rate goes from 310,00 to 355,000 EUR plus expenses.

During winter, she cruises in the Bahamas with a charter price starting from $310,000 per week.

She has a running cost of $1 to $3 million annually and a current price of $35 million.

He is the owner and CEO of General Information Services (GIS), a technology company that provides background screening. He has a net worth of $200 million.