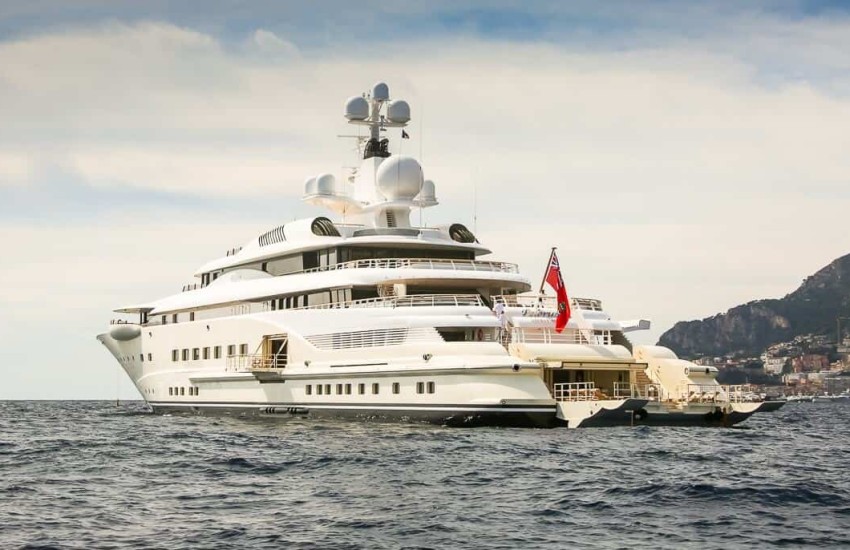 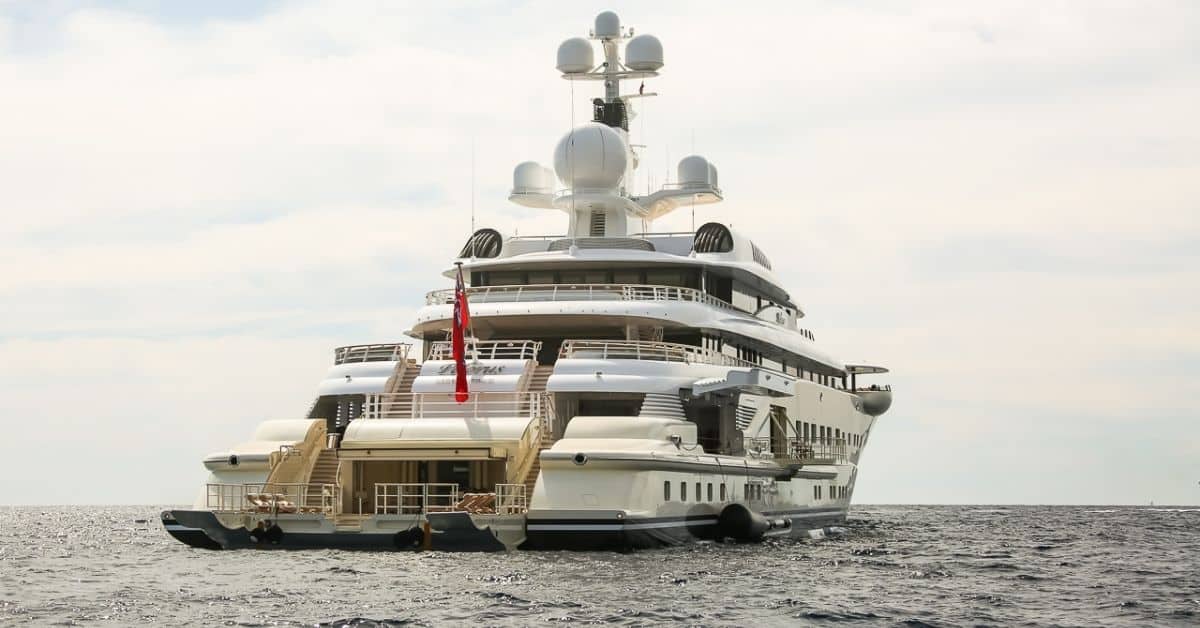 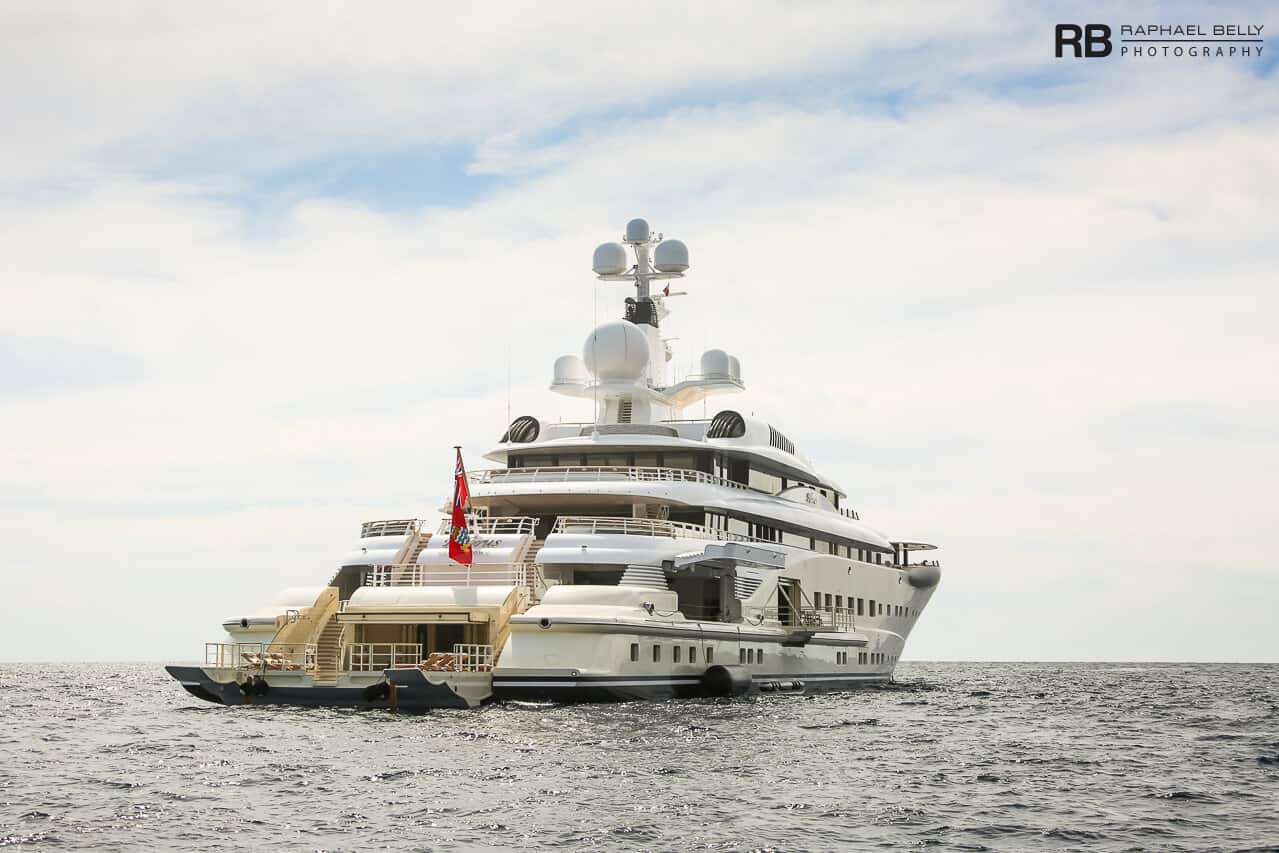 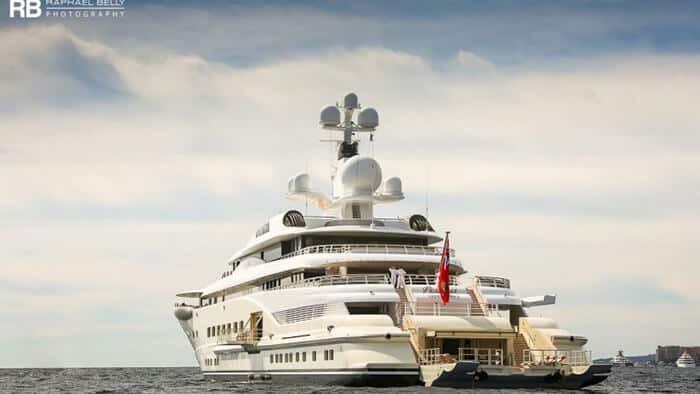 The PELORUS yacht is named from the Greek word “vast” because she is one of the largest boats in the world.

Her interior was designed by Terence Disdale, an English design studio, and she was delivered to her owner in May 2003.

Tim Heywood Design created the exterior design for this luxury yacht, which was recently refurbished in 2007.

The PELORUS yacht is designed to comfortably accommodate up to 18 guests in 9 suites comprising two VIP cabins and an additional 41 crew in 20 rooms to ensure a relaxed luxury yacht experience.

PELORUS is currently sailing under the Cayman Islands flag, the second most popular superyacht flag state.

Terence Disdale was in charge of her design, and he developed an interior that embraced the relaxed and informal ambiance of a beachside villa.

The PELORUS yacht is a highly private yacht, and very little information is known about her interior or other particular details from aboard.

The PELORUS yacht has many amenities including two helicopter landing pads, a swimming pool with artificial current, a spa pool, and an owner’s suite with 180-degree panoramic views that open to a private deck.

She is built with stunning engineering technology and features high-caliber systems, including the bowthruster, being provided with a backup.

At the same time, the control of all propulsion units is centralized in a ‘Lipstick’ that allows the yacht to be maneuvered accurately with a single joystick.

One of the most distinctive features of this luxurious mega yacht is the ‘lido’ on the top deck, which has two swimming pools and a vast sea-level platform that is created once the transom is opened.

This location gives good access to the water and an excellent ‘beach area’ where visitors may relax and enjoy the various water toys available.

Aside from that, the PELORUS superyacht includes two helicopter pads for the convenience of its owner and visitors.

Additionally, the superyacht is equipped with a spacious pool, a jacuzzi, a variety of toys, and a tender.

The yacht was built with a steel hull and aluminum superstructure with a 17.2-meter beam. She has ranked the 48th largest yacht in the world with a length of 377 feet 3 inches or 115 meters and a gross tonnage of 5317.0 GT

She can reach a top speed of 20 knots, and her cruising speed is 18.0 knots for a relaxing experience.

Her maximum cruising range is 6000.0 nautical miles for long-distance cruising, with her power coming from two 5,500-hp Wärtsilä 12v 26 engines.

The PELORUS yacht was bought for US $200 million and has an annual running cost of $15-20 million.

She was briefly owned by a Saudi businessman who sold it to Russian billionaire Roman Abramovich the following year for a hefty sum of money.

Abramovich commissioned Blohm & Voss to refit the yacht to his specifications, resulting in an additional helicopter pad forward and four new zero-speed stabilizers. Additionally, her exhaust, mast, and stern were modified as part of the renovations.

She was later on sold to the current owner, Hong Kong-based billionaire Samuel Tak Lee, who is active in real estate development.

He owns The Prudential Enterprise, which includes Langham Estate, Knight Bridge Estate, and the Prudential Hotel in Hong Kong.