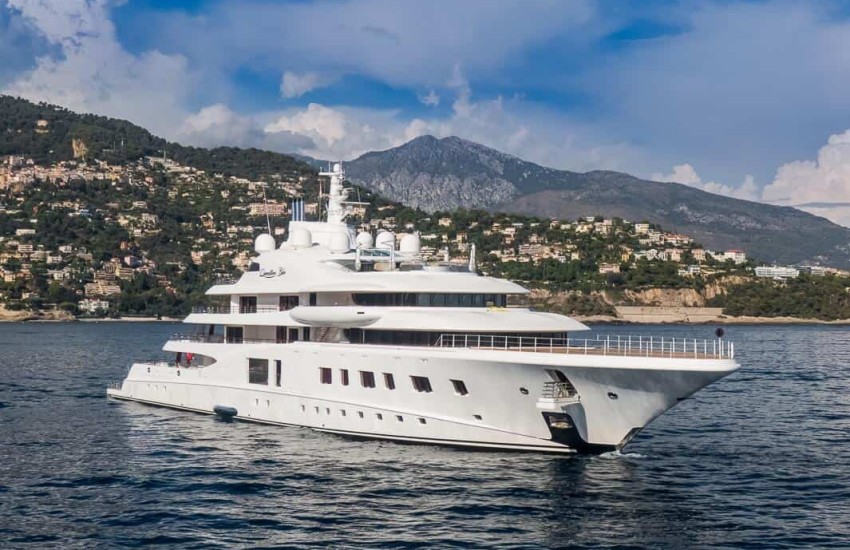 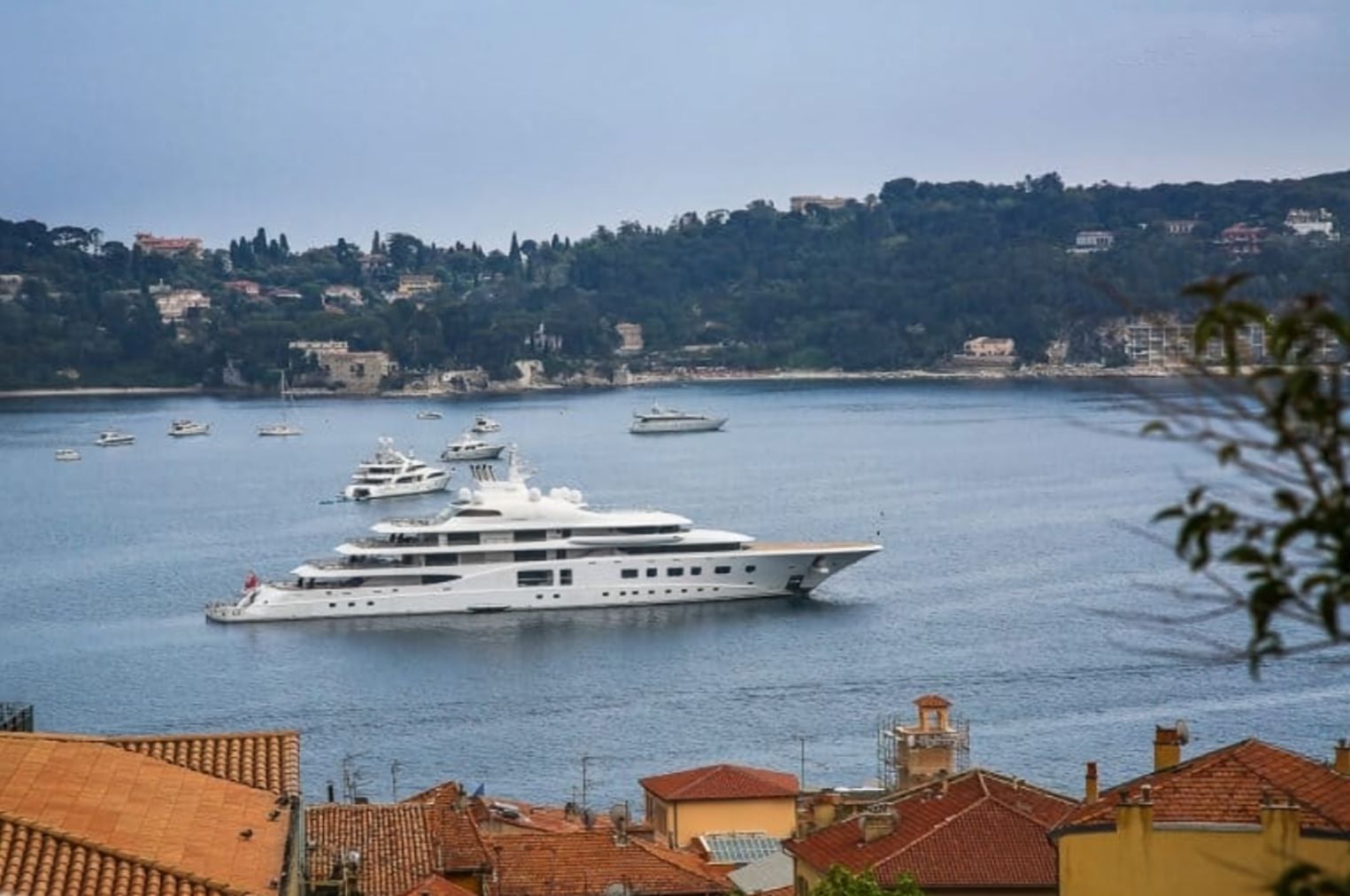 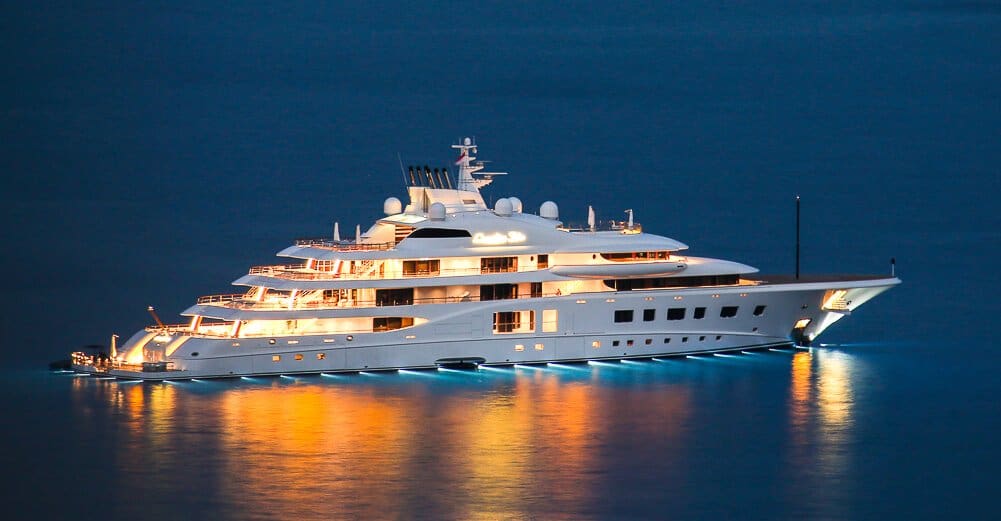 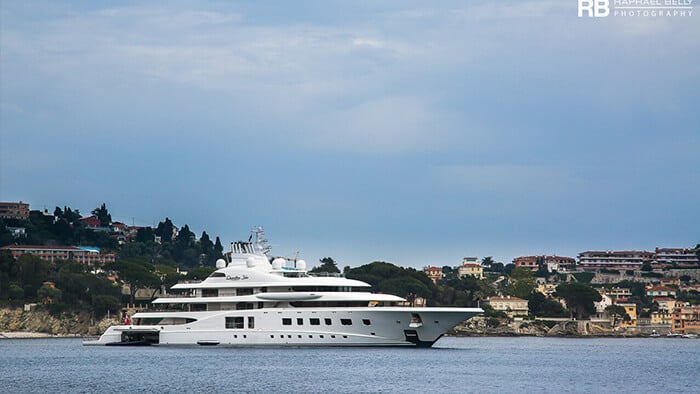 The QUANTUM BLUE yacht was built by Luerssen at their Bremen shipyard in Germany and delivered to her owner Sergey Galitsky in 2014. She is 104 meters (341.2 ft) long and was designed by Alberto Pinto and Tim Heywood Design.

The French design house of Alberto Pinto is responsible for the interior furnishings of the QUANTUM BLUE yacht. While Pinto himself passed away in 2012, his team of professional designers successfully carry on his legacy of bespoke yacht design.

He is known for his classical design choices and creates opulent layouts for his clients, all custom-made.

Although the exact details of the interior of QUANTUM BLUE are not known, it is assumed that the yacht looks similar to Pinto’s previous projects with a modern twist on traditional yacht interiors.

The vessel can accommodate fourteen guests in seven spacious cabins as well as eighteen crew members, which is not a large team considering QUANTUM BLUE is more than 100 meters long.

She has a spa, a gym, a cinema room, and a beautiful beach club on board, as well as separate crew and guest elevators.

Her average cruising speed is 13 knots, but if needed, she can reach top speeds of 22 knots. She features high-quality at-anchor stabilizers which ensure optimal comfort levels for her guests even during rough seas.

Tim Heywood Design Studio developed the elegant exterior of the QUANTUM BLUE yacht. The award-winning designer has worked on high-profile projects such as DILBAR in the past and is well-respected in the world of superyachts.

QUANTUM BLUE is all-white with four decks, all equipped with comfortable seating areas for guests. A spacious beach club opens up onto the swimming platform at the aft of the vessel, allowing direct water access.

The yacht is equipped with a modern underwater lighting system and a large aluminum superstructure.

At the bow, a helipad enables the owner of QUANTUM BLUE to arrive and depart in style. Her top deck features a large jacuzzi providing exceptional views of the surrounding ocean.

The QUANTUM BLUE yacht was built for a price of US $250 million and incurs annual running costs between US $15 and 25 million. The yacht is currently not available for charter or for sale.

The Russian businessman Sergey Galitsky is the owner of QUANTUM BLUE. He has an estimated net worth of US $3.5 billion and also owns a Gulfstream G650 private jet.

Galitsky made his fortune with his retail chain Magnit as well as the wholesale company Tander.

He is also president of the Russian football club FC Krasnodar. Galitsky has one daughter with his wife Viktoria, and the trio often takes QUANTUM BLUE out for extended trips in the Mediterranean and Caribbean.

Quantum Blue is powered by MTU engines. She can cruise at up to 21 knots. Her estimated running cost is fifteen to twenty-five million dollars (US$ 15 – 25 million) per annum. She is all shades of luxurious and sophisticated.