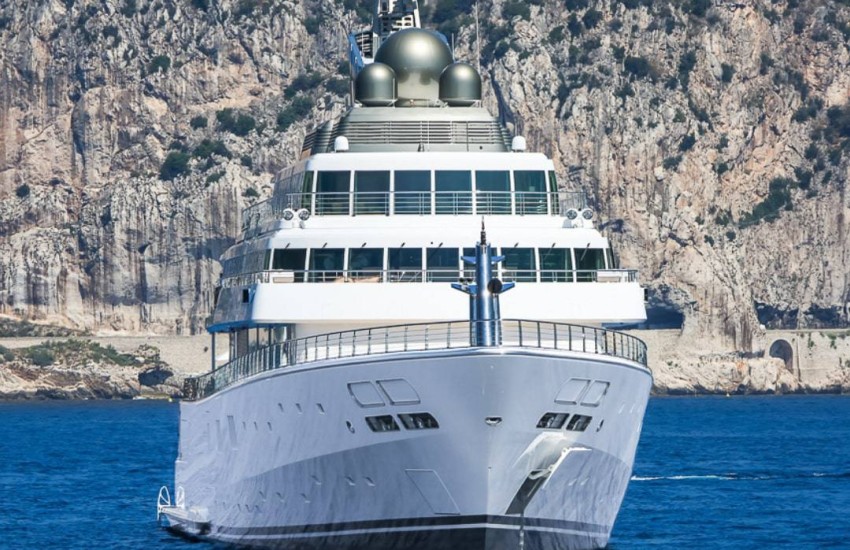 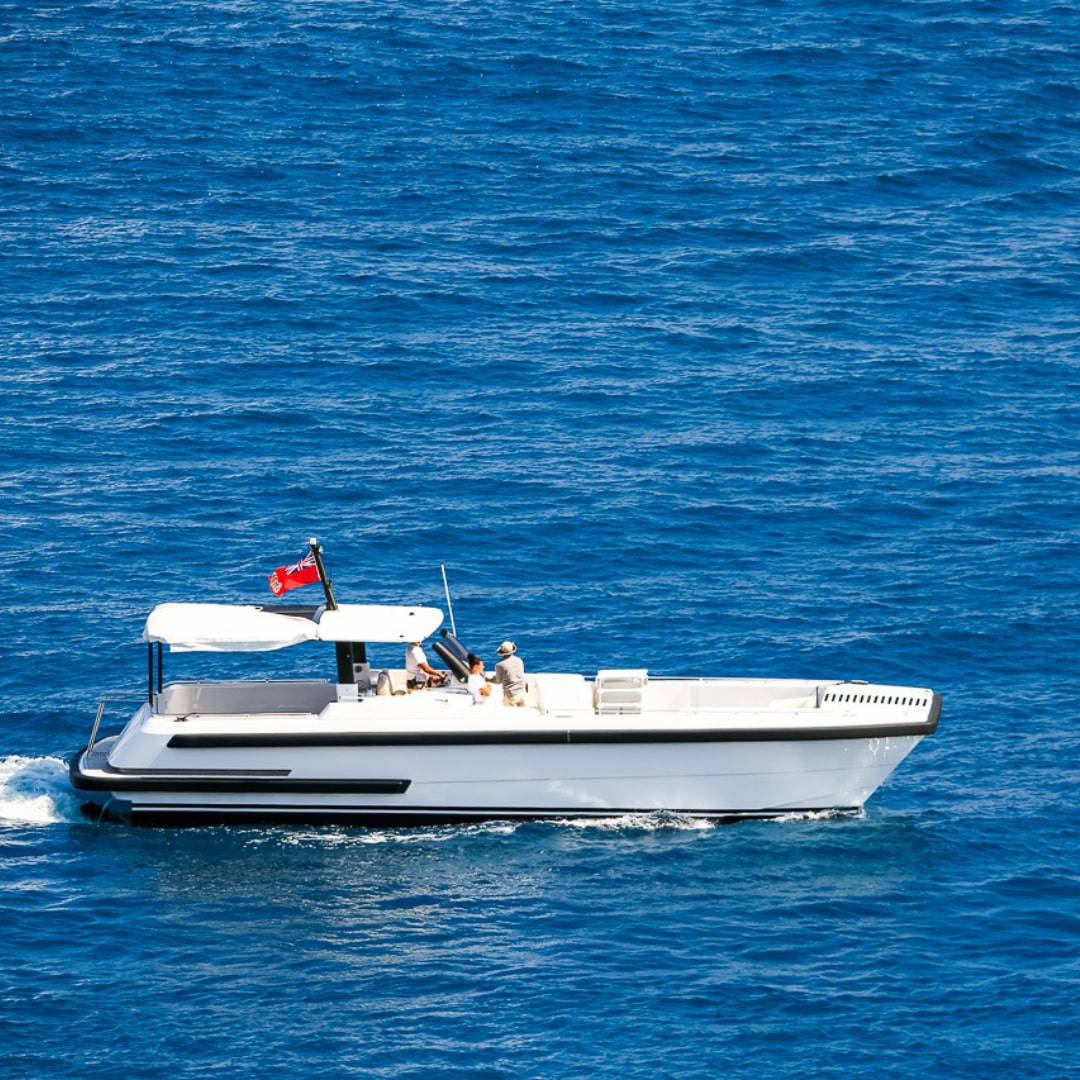 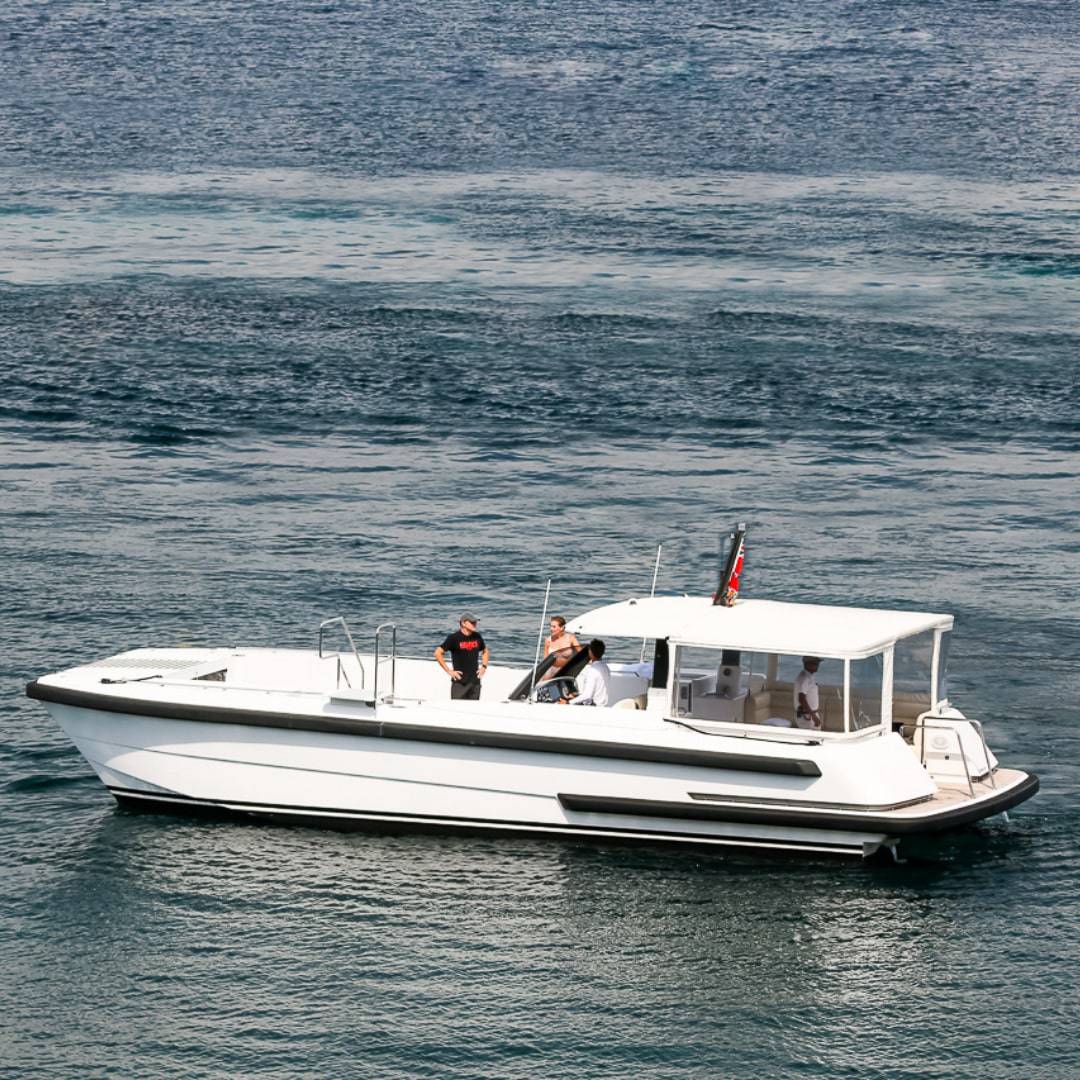 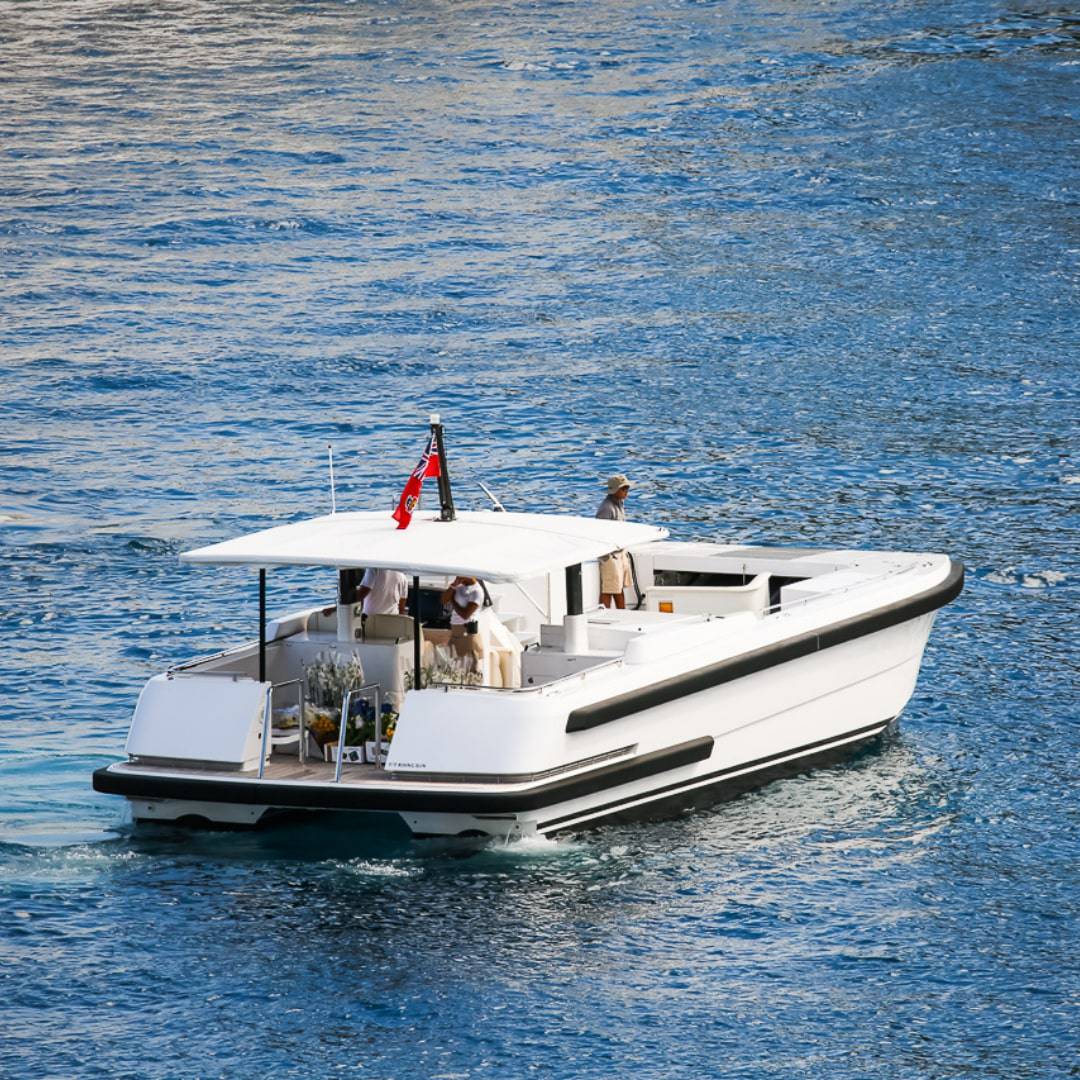 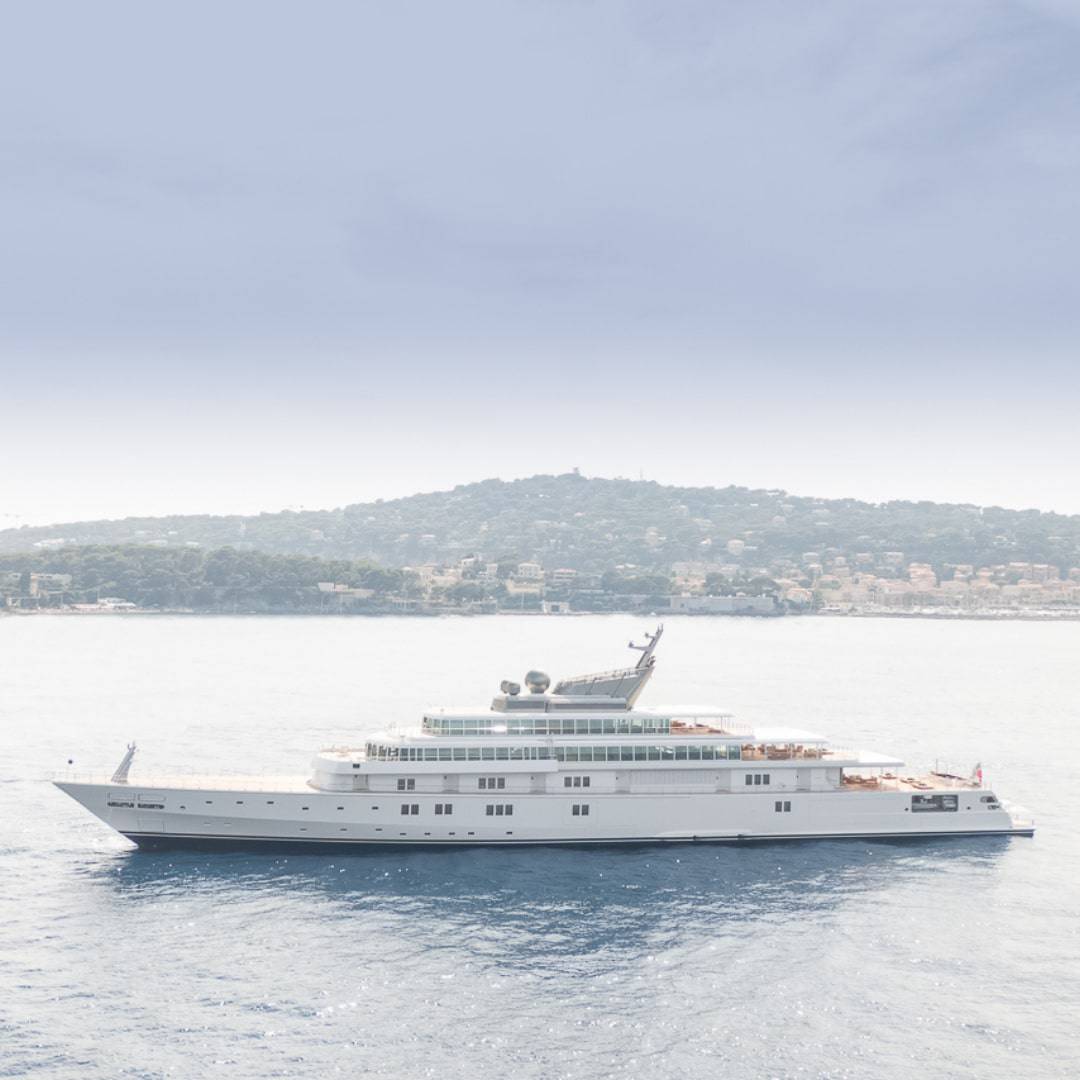 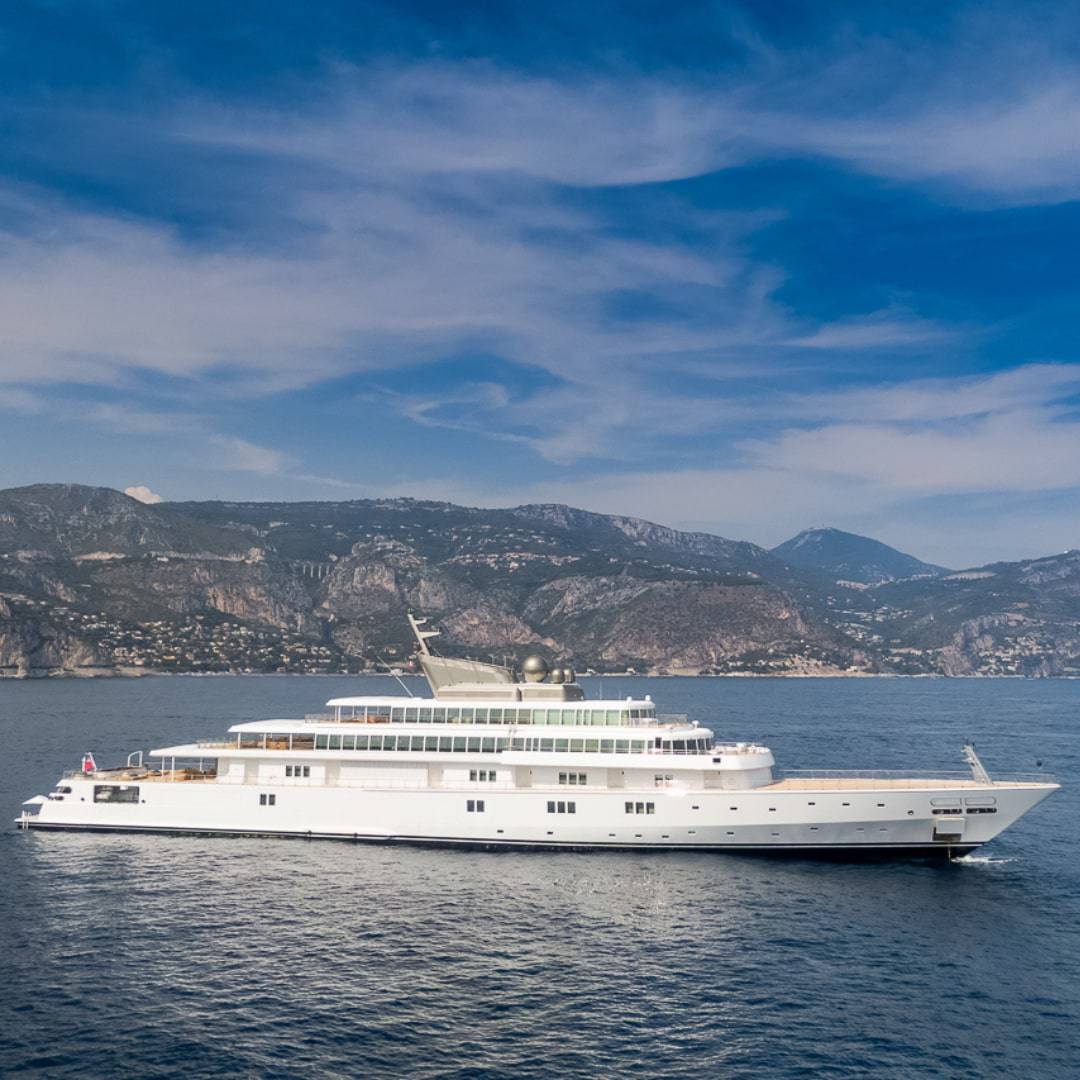 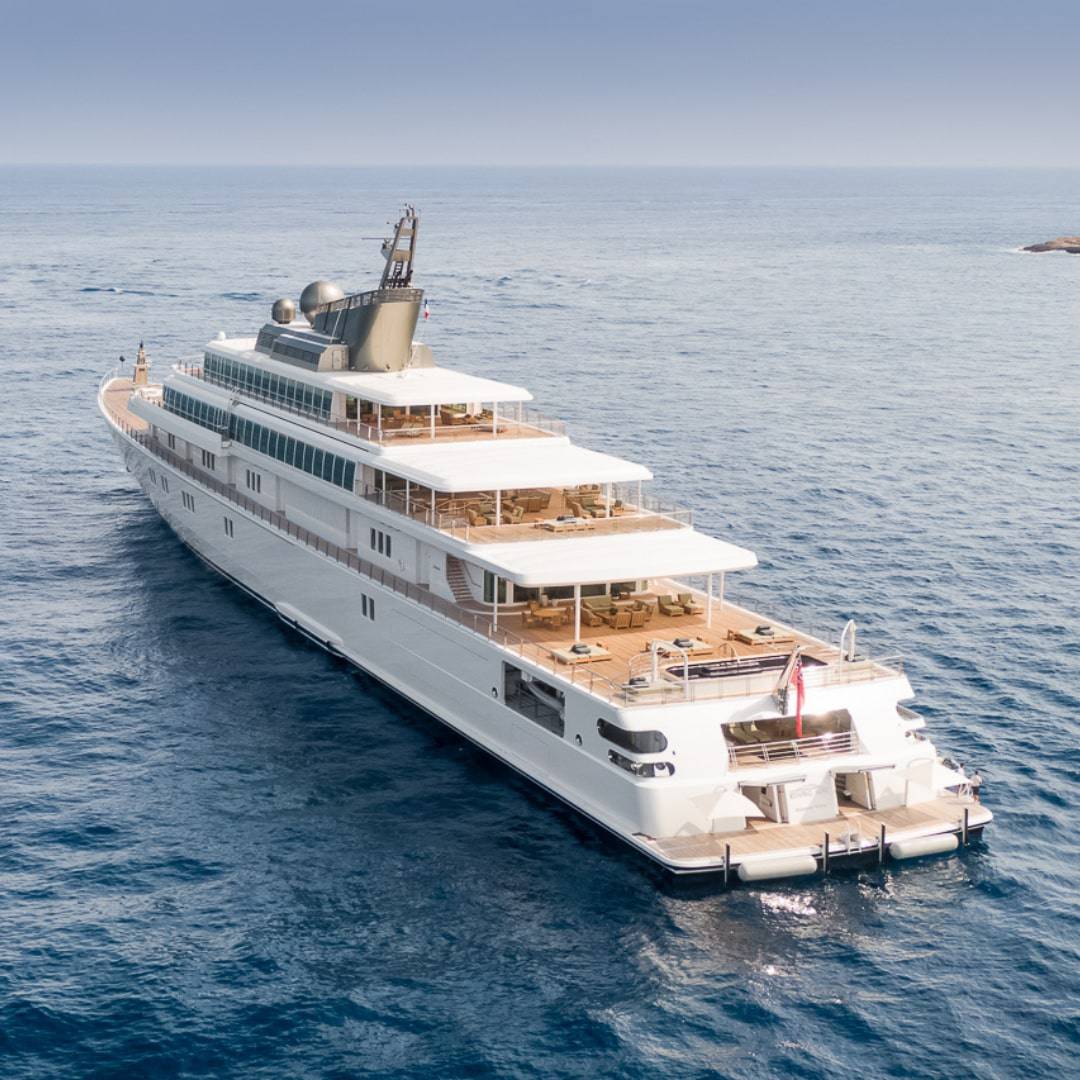 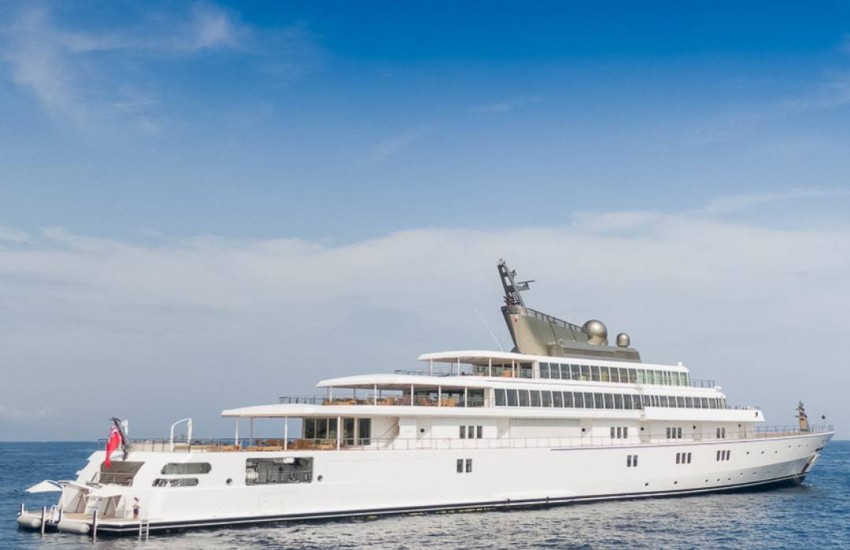 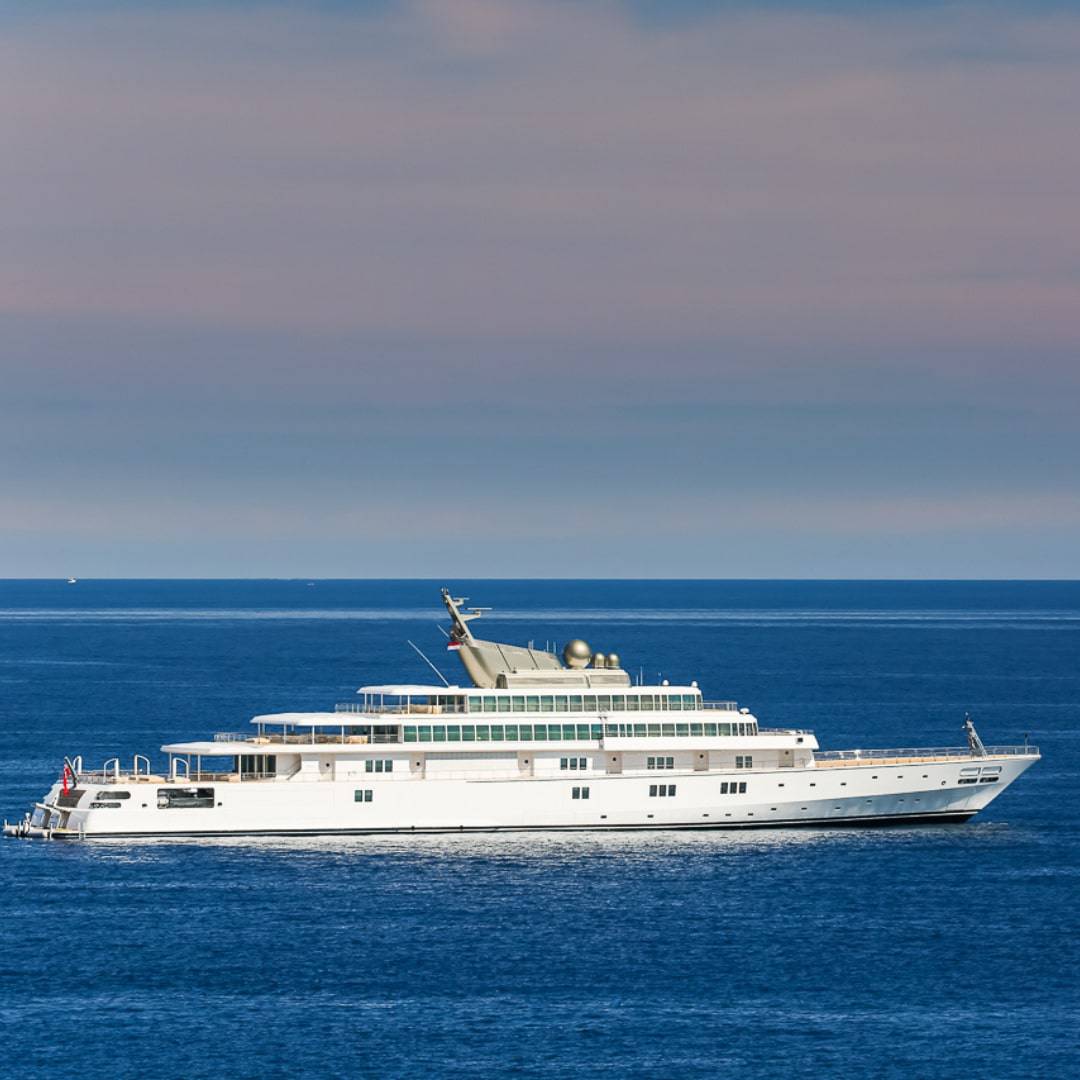 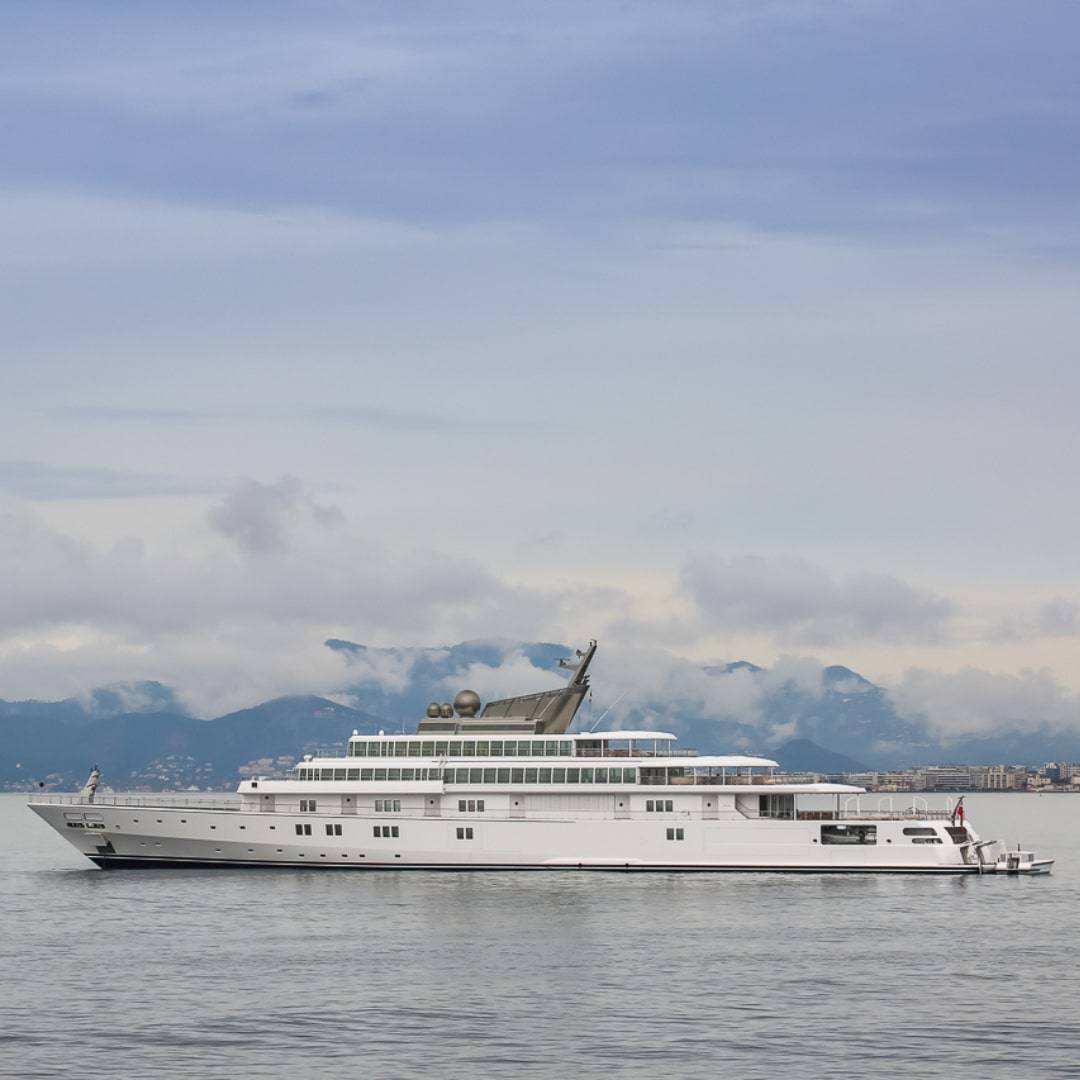 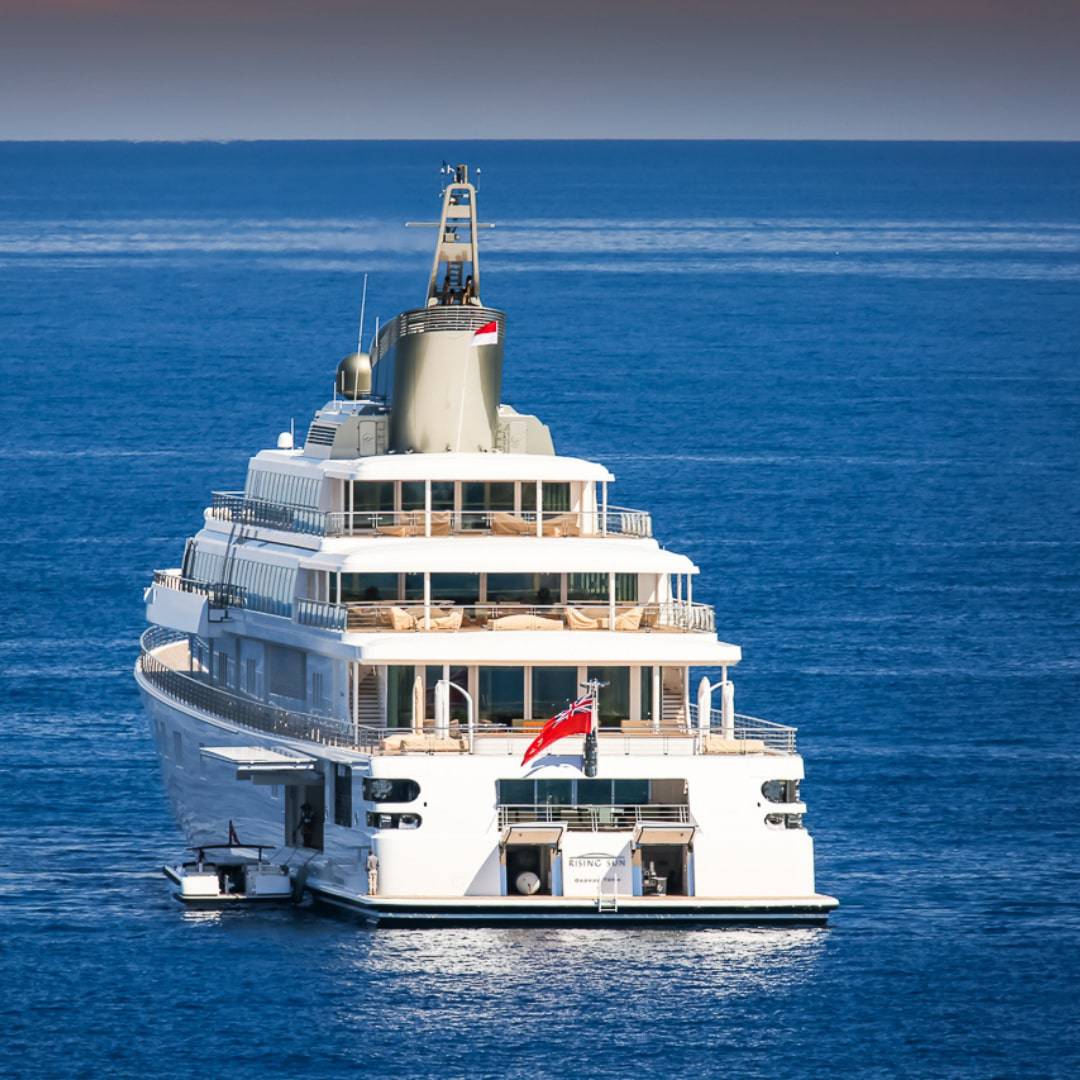 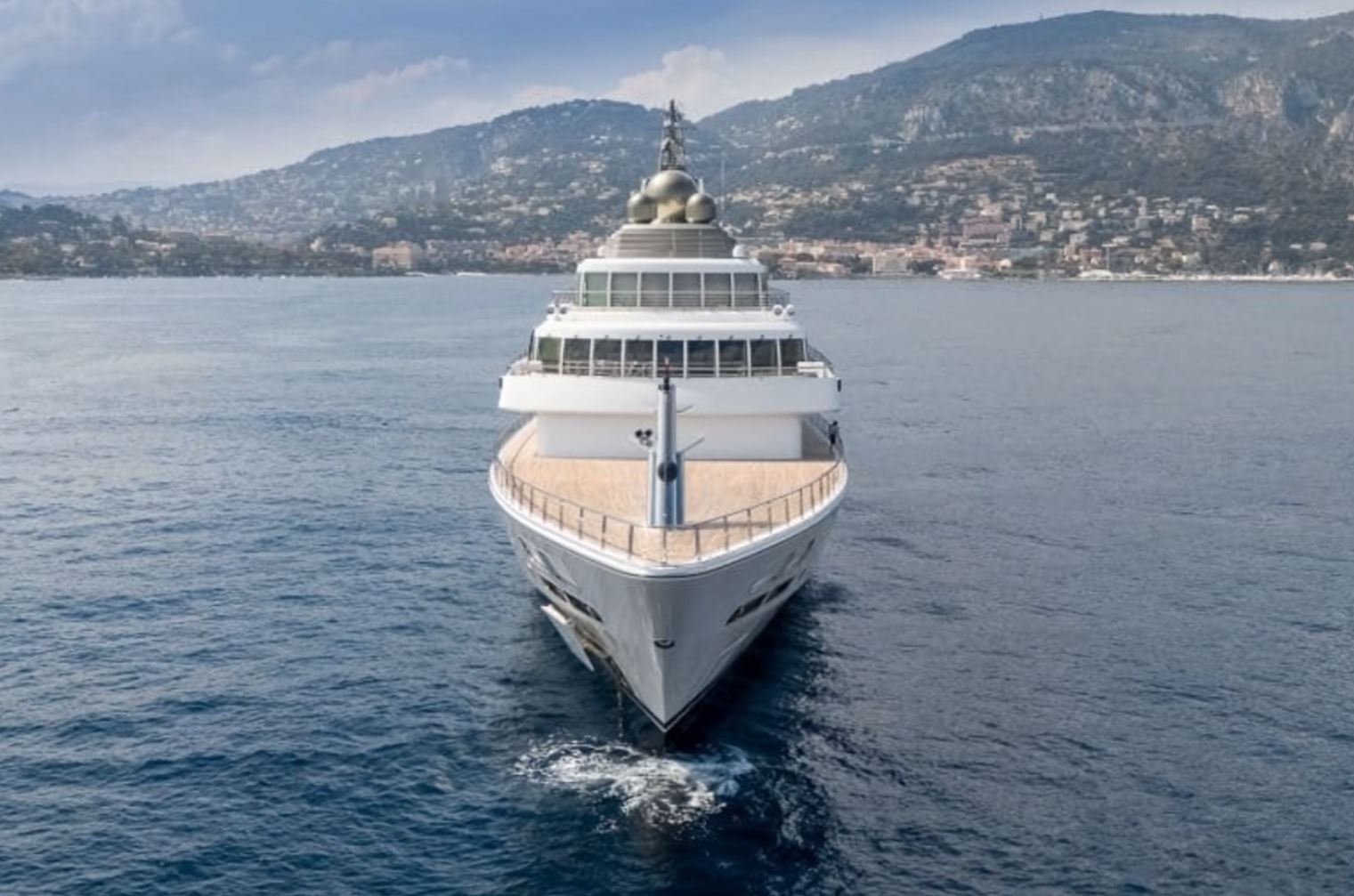 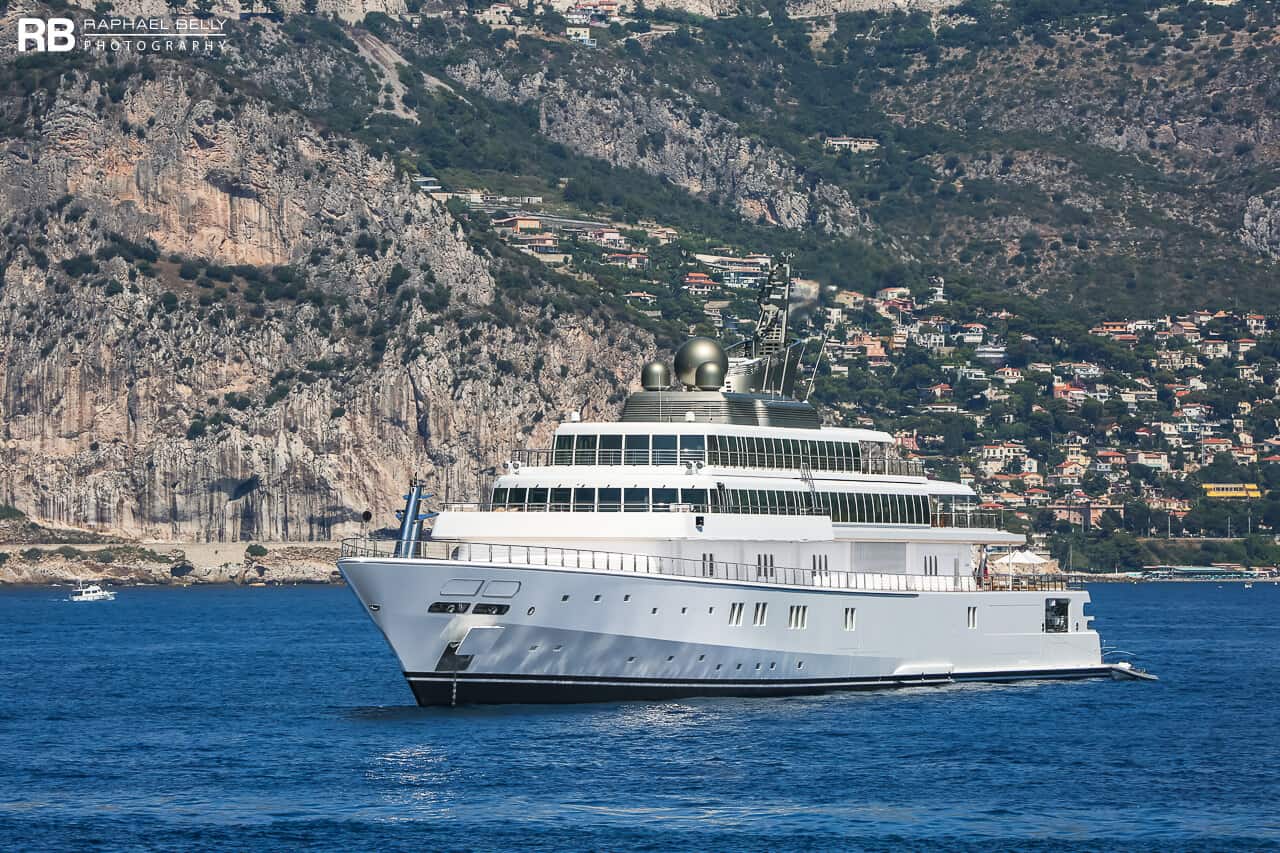 RISING SUN yacht is currently the 16th largest motor yacht in the world at a length of 138.6 metres (454 ft). She was built by Luerssen in Bremen, Germany and launched in June of 2004. The current owner of RISING SUN is David Geffen who is associated with Warner Brothers Film Studio and Dreamworks Production.

The interior of RISING SUN was styled by Seccombe Design, a small and highly specialised design company. The 138.6 metre long vessel was their largest project to date.

She was last refitted in 2011 and fully updated to fit modern standards. The interior of RISING SUN is classically styled with lots of dark elements and wooden features. She comes with a gym, a grand piano, multiple swimming pools, a beauty salon and a spa which includes a sauna.

Sixteen guests can be welcomed aboard the super yacht’s eight suites. A further 45 crew members find space in 30 cabins below deck.

RISING SUN is powered by four MTU engines which allow her to reach top speeds of up to 30 knots although her cruising speed lies at 26 knots. She was built by Luerssen, one of the most famous shipyards for luxury yachts in the world.

Her total volume lies at 7841 tons making her one of the largest motor yachts in the world not only by length but also weight. Her beam measures 19 metres (62.4 ft) and her draft is 4.85 metres (15.1 ft). The built-in at-anchor stabilisers allow her guests to be comfortable even during rough seas.

The exterior of RISING SUN was developed by the superyacht designers Bannenberg & Rowell. Dickie Baneberg’s father was one of the most legendary designers of all time in the industry, sometimes even called the father of yacht design.

His son is continuing his legacy and elements of Jon Bannenberg’s style can still be recognised in this work. With her many separate windows RISING SUN almost looks like a small cruise ship.

She is all-white, in classical yacht design with a steel hull and aluminium superstructure. In addition to her covered decks she features a large open-air space at the bow as well as one at the aft of the vessel.

The yacht originally cost an estimated US $200 million when she was launched in 2004. However, due to refits and sales RISING SUN is now valued at a price of US $570 million. Her annual running costs lie somewhere between US $25 and 40 million.

This superyacht was originally built for the American businessman and investor Larry Ellison. However, he felt like the RISING SUN was too large for him and decided to make David Geffen the co-owner of the vessel in 2006.

The film studio executive became the full owner of RISING SUN in 2010, while Ellison purchased a smaller 88-metre (288 ft) yacht in the same year. Geffen used his superyacht for quarantine purposes during the ongoing COVID-19 pandemic while sailing through the Caribbean.