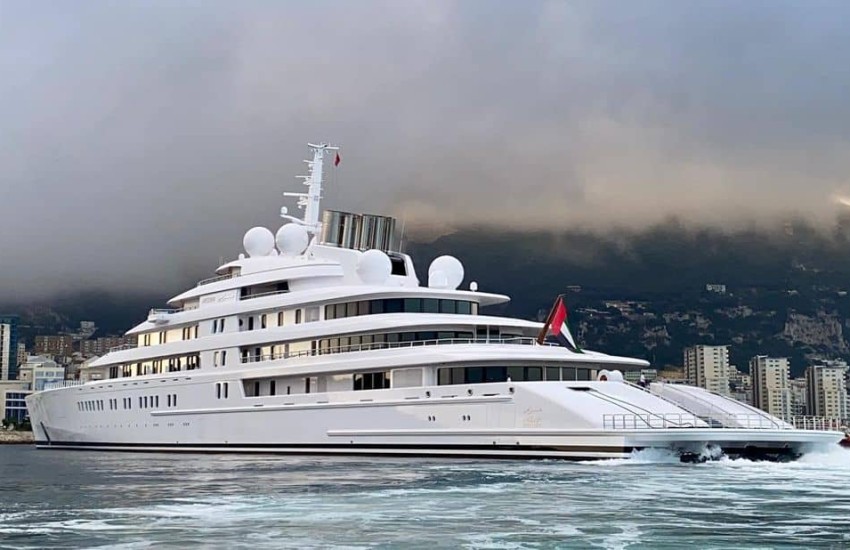 AZZAM yacht is the largest superyacht in the world, with an impressive length of 179.7 meters (590 ft), making her more than 15 meters longer than FULK AL SALAMAH, which is in second place on the list.

The interior design of AZZAM is attributed to the French designer Christophe Leoni who is surprisingly not incredibly experienced in designing superyachts. However, he had previously worked on private residences and several palaces for Khalifa bin Zayed Al Nahyan, the owner of AZZAM.

While exact details on the interior layout of the massive yacht have not been released to the public, it is known that Sheikh Khalifa requested a lot of wood furniture as well as intricate mother of pearl elements to be incorporated into all parts of the yacht. More than a year’s worth of production of pearls was used in the interior design of AZZAM.

The interior has been described as being inspired by the Empire style reminiscent of the 19th century and incorporates numerous valuable artworks which are on display onboard AZZAM.

She can welcome an estimated 36 guests and over 80 crew members, which is one of the highest numbers in her size category. AZZAM reportedly has 18 guest cabins with a massive owner’s suite that spans across several rooms.

According to rumors, the suite was constructed to be bulletproof, and there is a designated missile defense system installed onboard the AZZAM yacht although it is unclear whether this is accurate.

One of her most notable features is her custom-designed golf room which allows guests to practice their swings without even having to step foot outside. She also has a large gym, a spa, several pools and jacuzzis, and a beauty salon on board.

Her main saloon is supposed to be one of a kind and one of the largest ever constructed on a private yacht. At 29 meters (95 ft) by 18 meters (59 ft), it is larger than a tennis court and offers unobstructed views of the outside due to its floor-to-ceiling windows.

There are no pillars to support the saloon, which gives it an open feel but requires additional ceiling beams and 7-centimeter thick custom-made windows. A large and fast yacht-like AZZAM is bound to generate a lot of noise when underway.

To ensure a comfortable experience for guests onboard, engineers installed special software which keeps vibrations and engine sounds to a minimum. This means that the large chandelier in the main saloon doesn’t rattle even when the yacht is underway.

AZZAM might be the longest yacht in the world, but she is technically not the largest. DILBAR actually has a higher displacement and weight even though she is more than 23 meters (75 ft) shorter than AZZAM.

AZZAM is powered by twin gas turbine engines and two additional diesel MTU engines and can carry more than 1 million liters of fuel onboard.

Despite her size, she can reach impressive top speeds of 30 knots which can be attributed to her relatively low draft, although her average cruising speed only lies at 12 knots. The yacht has several cruising modes, including a sprint setting as well as a long-distance mode.

The exterior of AZZAM was developed by Nauta Yachts, which specializes in combining practical functions design with aesthetics and sleek yacht design. AZZAM is their largest and probably most well-known project.

The AZZAM yacht took more than four years, and 4,000 people collectively worked for 6 million hours to complete it. The exterior is all-white with a streamlined design that is meant to make AZZAM appear smaller than she actually is when seen from further away.

On the bow, a large helipad is available for guests to arrive and depart in style and the yacht carries at least one helicopter at all times. The aft is reserved for a spacious swimming platform, although AZZAM does not have a beach club in this location like many other vessels of her size category.

As is to be expected for such a high-profile superyacht, AZZAM does not have a lot of open-air deck space and is designed to protect the privacy of its owners.

There are no visible pools or much seating, which suggests that the spacious interior of AZZAM is reserved for entertainment and common spaces.

Khalifa bin Zayed Al Nahyan reportedly paid a total price of US $600 million for the luxury yacht. Her annual running costs of US $50 to 75 million are not surprising, considering she is the largest private yacht in the world.

Khalifa bin Zayed Al Nahyan, the Emir of the United Araba Emirates was the owner of AZZAM until he died on the 13th of May 2022.

Sheikh Khalifa was the father of eight children together with his wife, Sheikha Shamsa, and was sometimes also referred to as the Emir of Abu Dhabi.

His net worth at the time of his death was the staggering US $18 billion, making him one of the richest monarchs. The Burj Khalifa in Dubai, which is the largest building in the world, was named after the Sheikh.

Before owning the AZZAM yacht, Sheikh Khalifa owned a smaller yacht that carried the same name, which has since been sold and renamed ADAMAS II.

The family of Sheikh Khalifa is incredibly wealthy and known for owning impressive luxury yachts and private jets. Khalifa’s brother Hamdan owns the motor yacht YAS which is ranked in 11th place on the list of largest yachts in the world, and his brother Mansour bin Zayed al Nahyan owns A+, which is 8th.