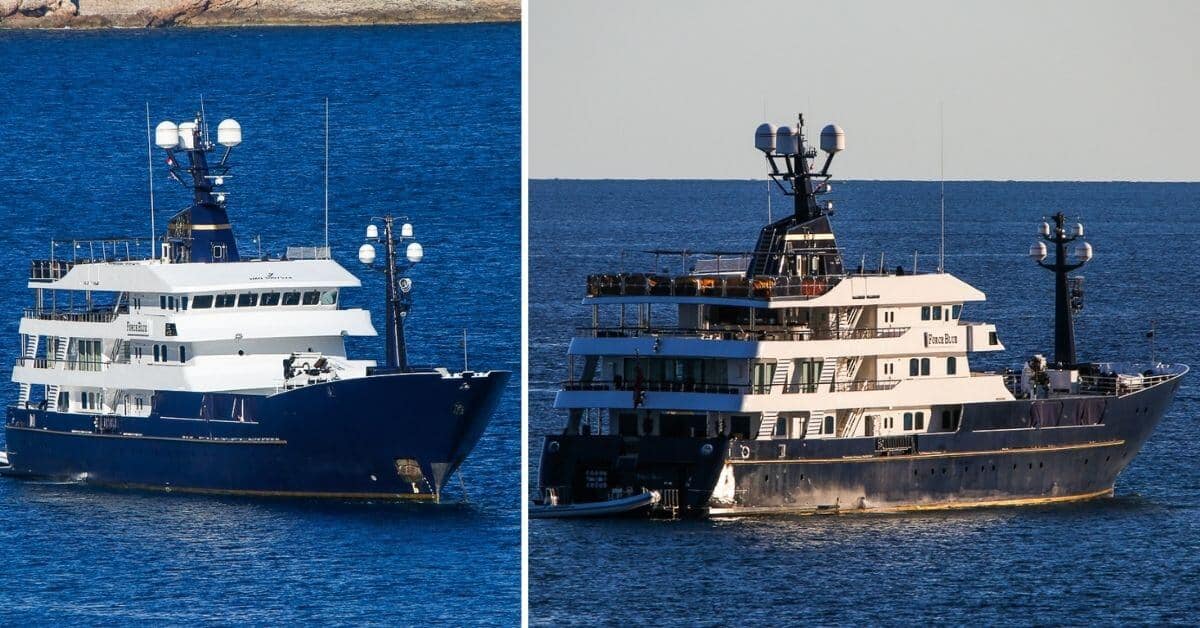 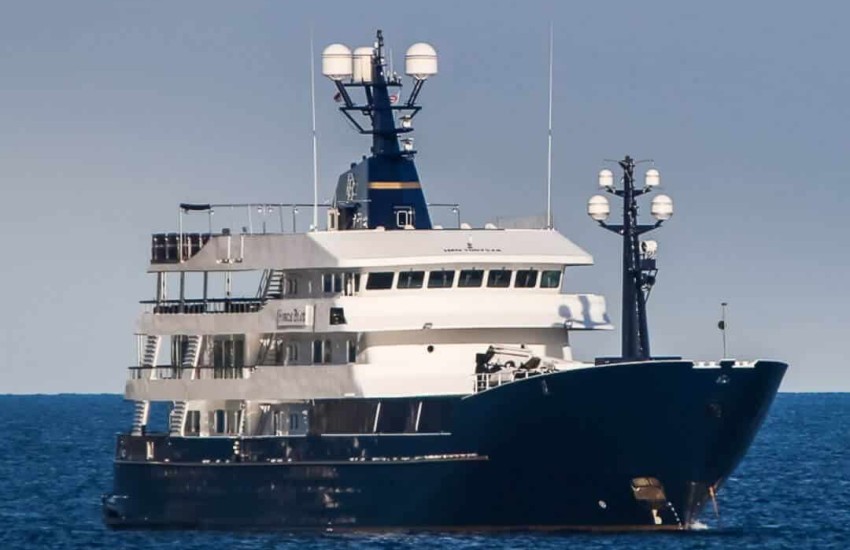 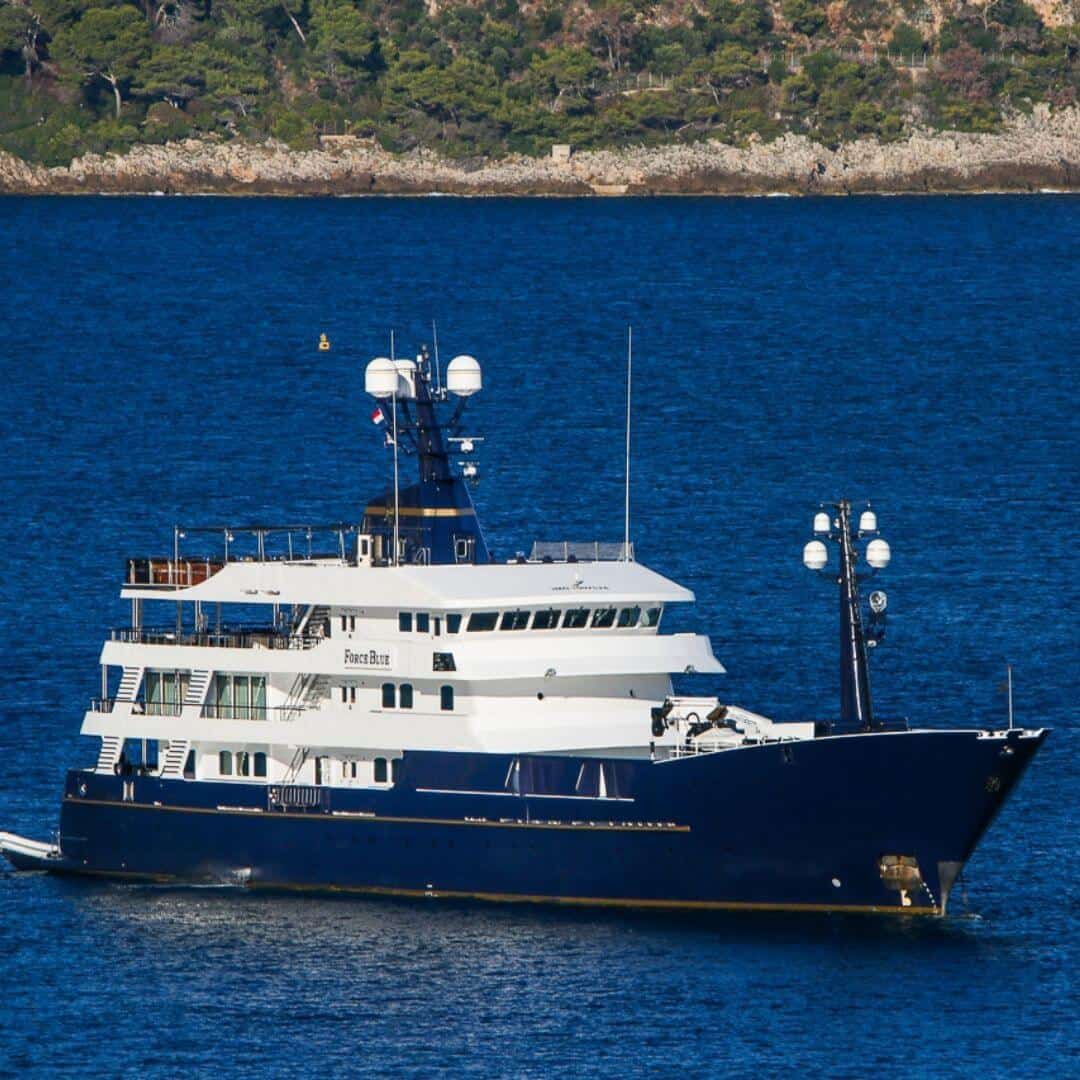 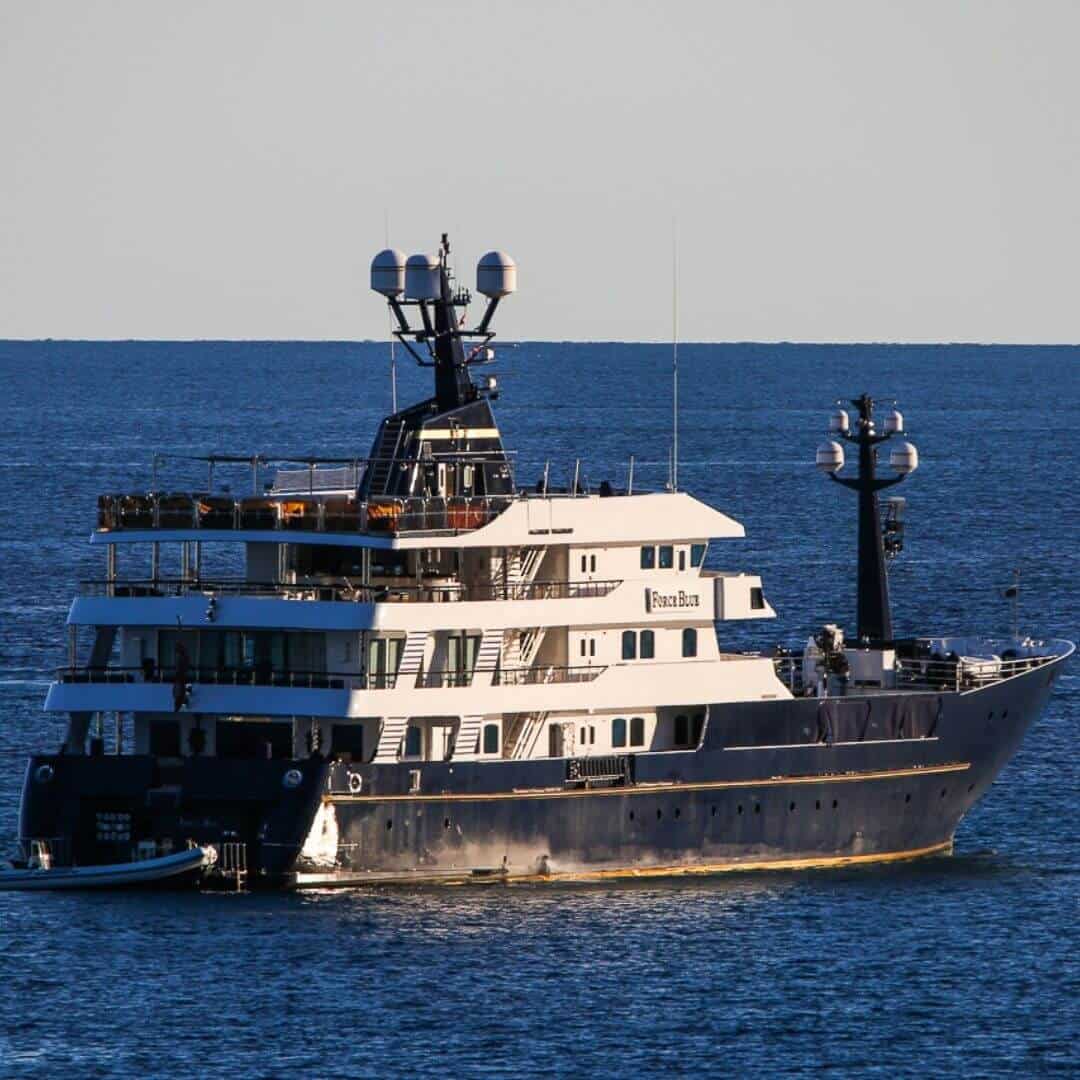 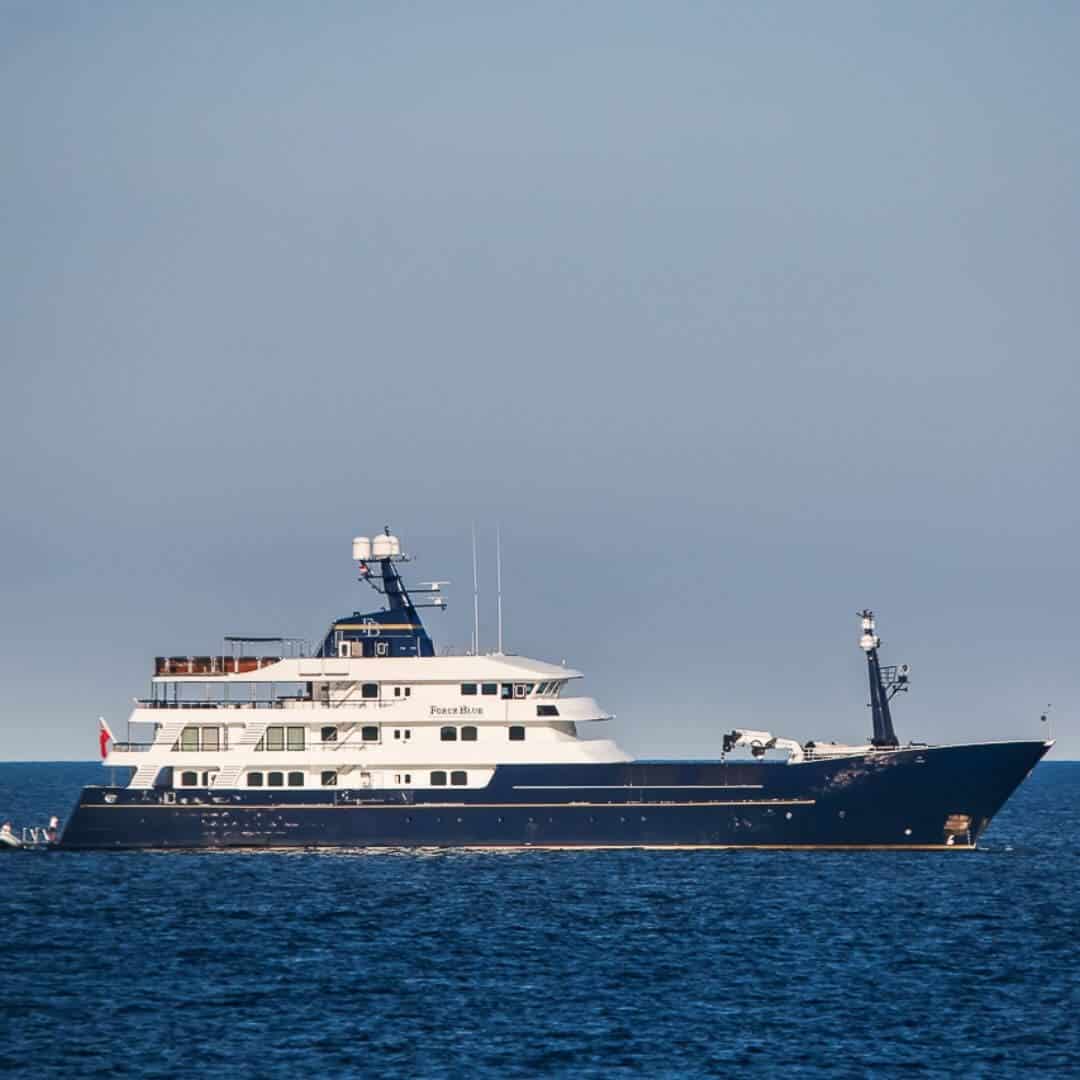 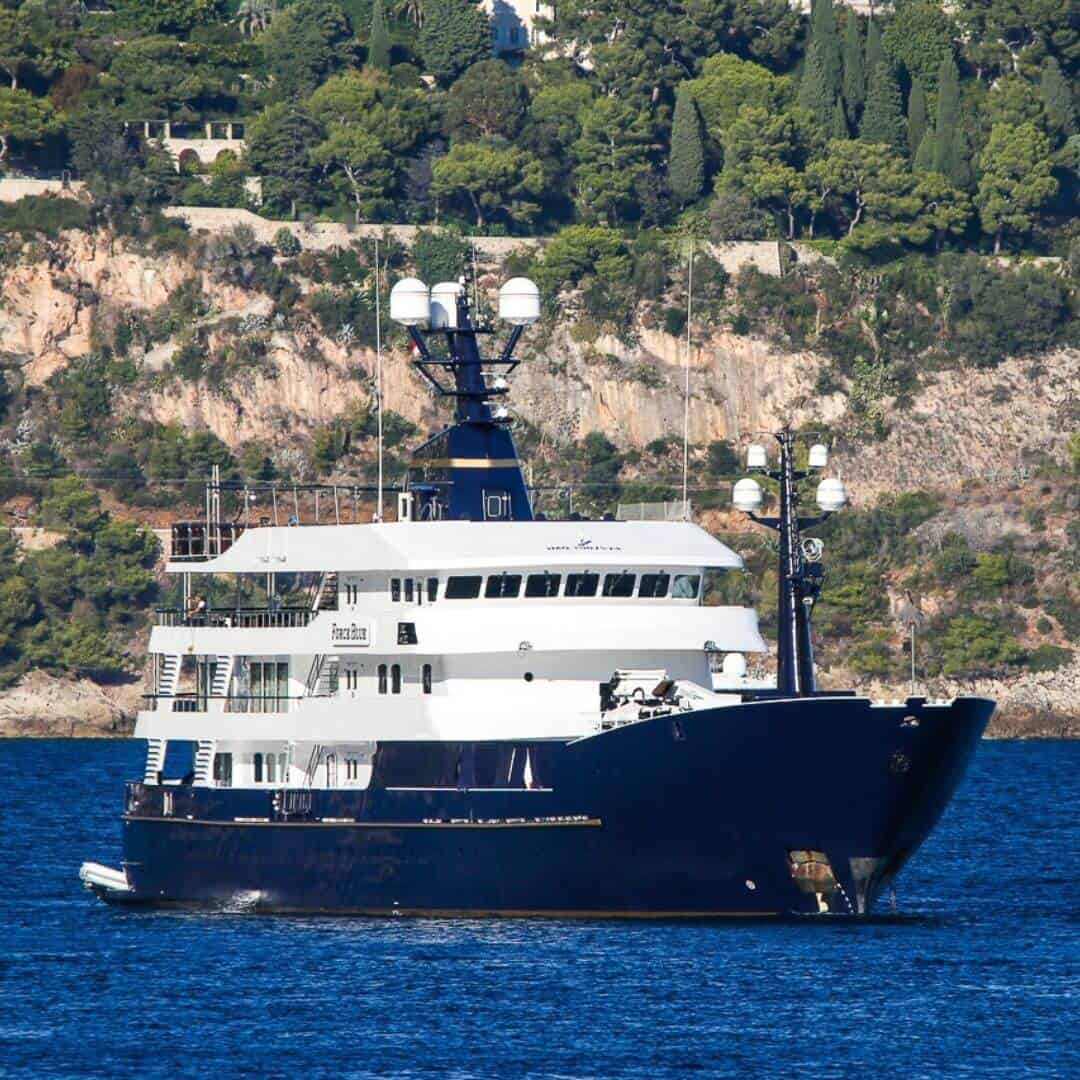 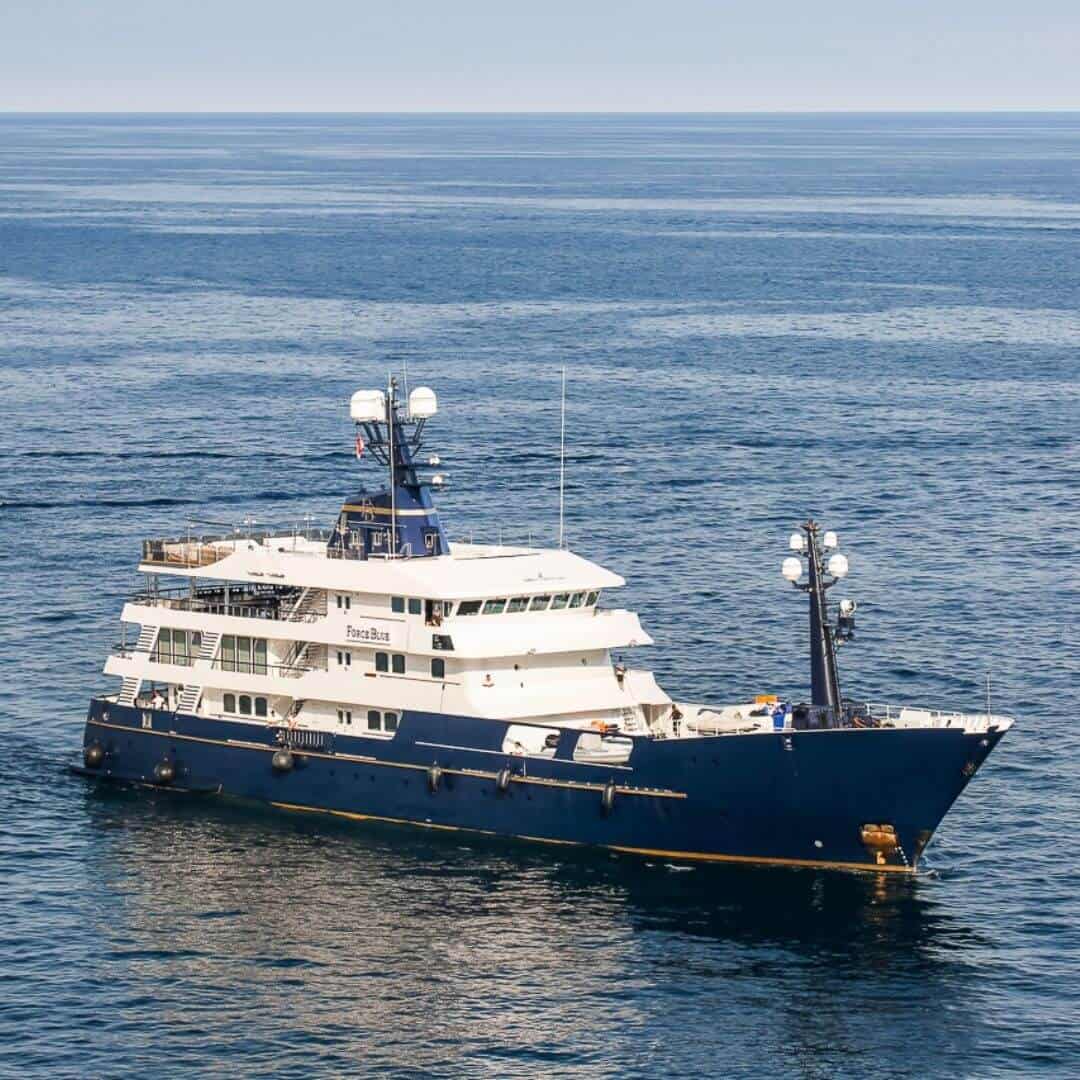 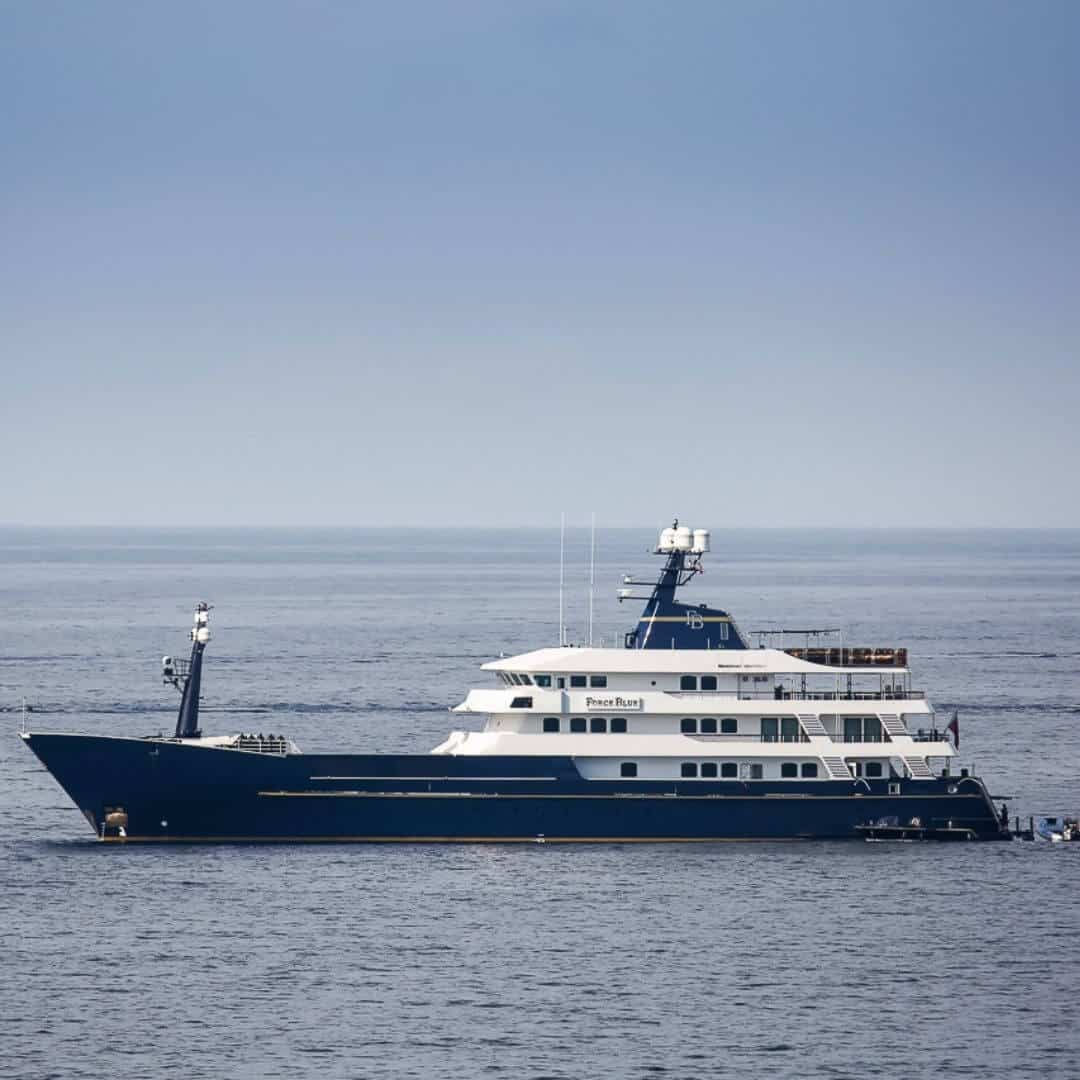 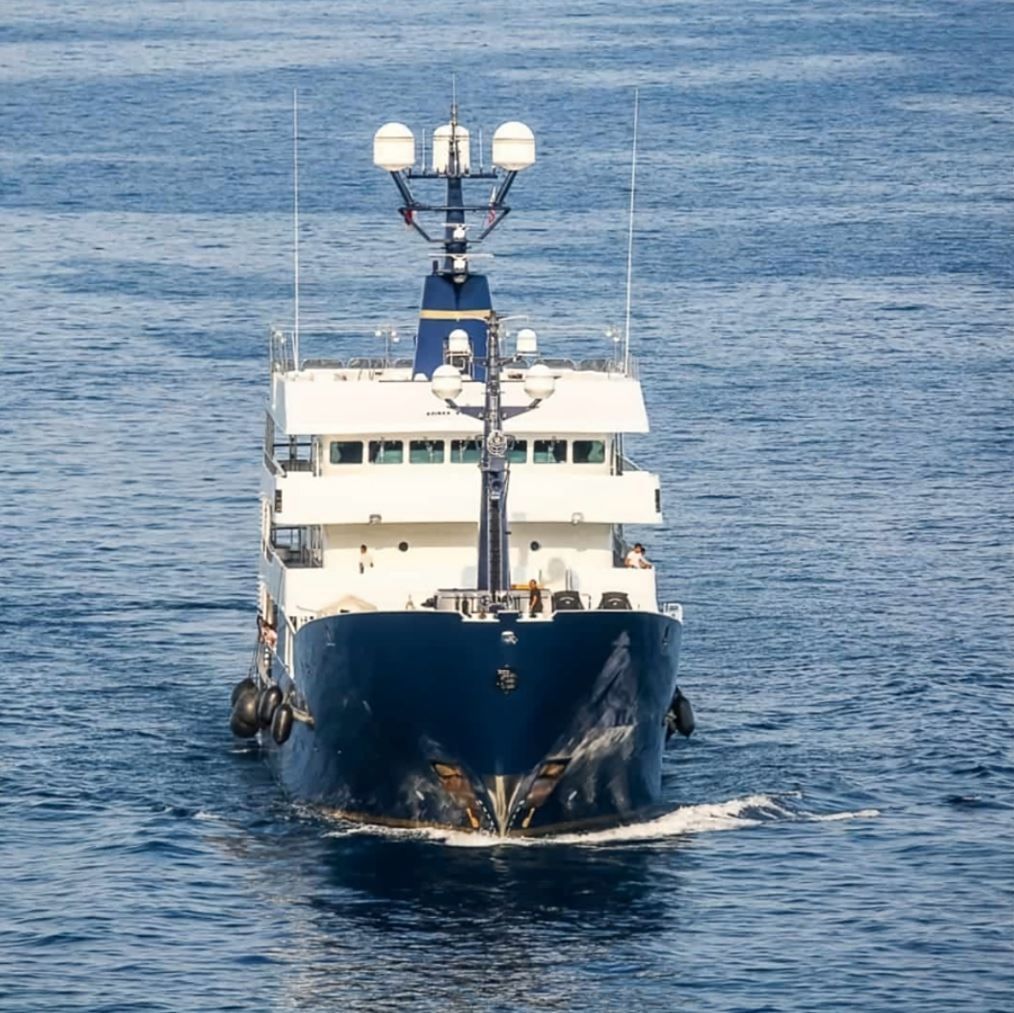 The sticking exterior of the yacht was developed by Tom Fexas Yacht Design and Ole Steen Knudsen.

The vessel is perfectly designed for entertainment on the water, with plenty of family-friendly spaces for a true superyacht lifestyle experience.

The vessel has accommodation for 12 guests in 6 cabins in one VIP cabin, three double cabins, and one twin cabin.

There are crew accommodations for 17 crew members. The superyacht is packed with luxury features, from a well-appointed library that offers a relaxing spot, the movie theatre to wind down after a long day, or the dance floor where guests can dance the night away.

The extravagance continues in a full spa with a sauna and a dip in the jacuzzi. The spa includes a hammam, mud bath, and sauna pool.

There is also a gym for guests to catch a workout. The FORCE BLUE is packed with water toys for fun on the water.

These toys include a collection of towable toys, diving equipment, a sea bob, paddleboards, and much more. The FORCE BLUE yacht is also wheelchair friendly.

She features extensive exterior spaces for the perfect event charter and has a light and refreshing interior that guests can enjoy.

FORCE BLUE is the perfect yacht to hold events on as the aft bridge deck has a full bar and reception area for 60 guests.

The exterior of the FORCE BLUE yacht was designed by Tom Fexas Yacht Design and Ole Steen Knudsen.

She features a royal blue steel hull in a white aluminum superstructure. Her hull is a full displacement hull, making her more stable while at anchor.

She was first built in 2002 by the Danish shipyard, Royal Denship. She later went through a refit at the beginning of 2022.

She was built as a part of Royal Densip’s expedition series, which include the yachts, TURMOIL, and BIG ARON. The shape of the yacht is a trawler expedition-style for adventure purposes.

The FORCE BLUE yacht has a length of 63.3m, a beam of 11.38m, and a draft of 2.95m. She has a displacement of 1325 gross tons and is fitted with twin Caterpillar engines. She comfortably cruises at 14 knots and reaches a maximum speed of 18 knots.

She has a range of up to 8000 nautical miles. She features an onboard stabilization system that ensures comfort for guests while at sea.

The owner of the FORCE BLUE yacht is Bernie Ecclestone, the ex-Formula One boss. FORCE BLUE was originally owned by Flavio Briatore, a friend of Ecclestone and former executive director of Benetton and Renault F1 teams.

There was some dispute over taxes and payments on the FORCE BLUE, and the courts decided to sell the magnificent yacht.

The sale reportedly took place at auction in January 2021. According to Forbes, Bernie Ecclestone has a net worth of $3 billion.

He is attributed with taking Formula One from a niche racing competition to today’s global phenomenon.