This 82-Foot Catamaran Concept Can Crawl Onto Shore 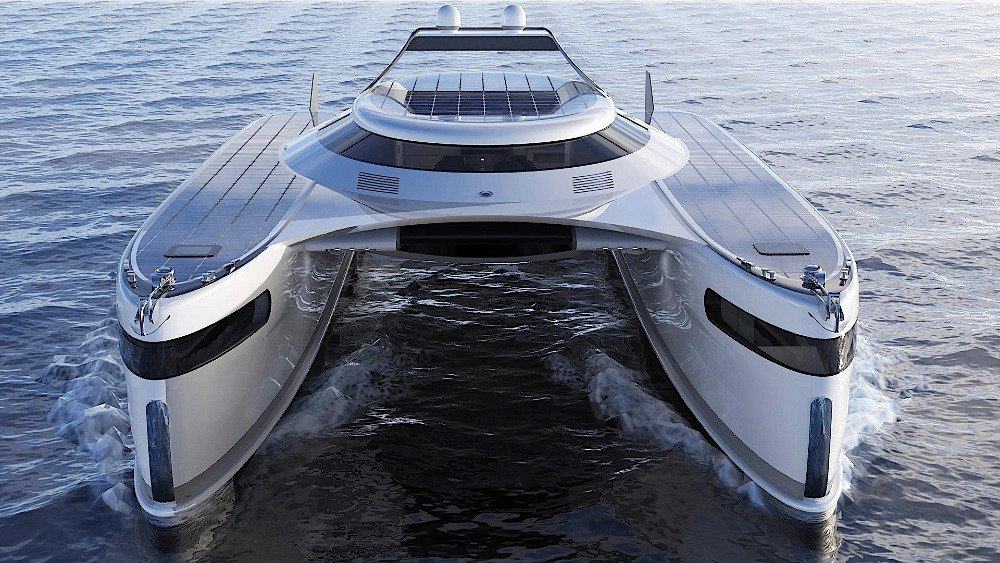 The PAGURUS is an innovative design for an amphibious catamaran. This out-of-the-box concept design can scuttle out of the water onto land like a crab, setting a new precedent for seafaring.

The design is from the Italian superyacht design studio Lazzarini Design which is the powerhouse behind the innovative concept that has the potential to be the ultimate explorer yacht. The PAGURUS is named after the Latin word for crab and echoes the shape of a crab.

The original concept from Pierpaolo Lazzarini was for the PAGURUS to be used in military applications. The original design featured camo paint and a rooftop cannon.

But he saw a large space growing in the industry for yacht buyers to have “off the grid” luxury vessels. He transformed his designs to better match this new brief.

The interior is a modern luxury inside the PAGARUS. The living areas are found in the two hulls and are connected via the bridge tower deck station.

Two or three cabins with a kitchen and toilet are optional within the vessel’s build. Eight guests and four crew members can be accommodated onboard.

The private version of the yacht will have the ability to host friends and family in the globe-trotting vessel. Lazzarini imagines that one of the best features of the PAGURUS would be the ability for guests to go off-roading, specifically in a Tesla Cybertruck.

The same storage platform could hold electric Tesla Cyberquad ATVs or snowmobiles. Charging the onboard electric vehicle will be easy thanks to the huge banks of solar panels incorporated into the decks.

The inspiration for the amphibious catamaran came from a giant crab. The high-sided hulls and low carbon fiber superstructure with slim semicircles of glass are reminiscent of a crab’s shape.

The steel hull echoes a crab’s hard shell as it is designed to be an inch thick with extra reinforcement around the bow for crushing ice during explorations throughout the globe.

The 25m yacht has some amazing features that make the PAGURUS a truly innovative design: underwater helical screws. This feature allows the PAGURUS to sail into a remote bay without disturbing the wildlife at a stealthy five knot with electric power.

Tucked into the twin hulls are four 6.5m long steel cylinders, which feature a helical spiral shape like a giant screw. Pulling up onto a beach is easy with this feature.

Each cylinder is powered by a 440 hp diesel engine and bites into the sand when turned on to drag the catamaran onto land. Turning these cylinders on while underway will charge the PAGURUS batteries.

The PAGURUS is imagined to have a 900 hp Caterpillar diesel engine that is coupled to sterndrives and gives a top speed of 25 knots.

There have been some critics commenting on the environmental impact of the PAGURUS because of the screwdrivers. But Lazzarini believes that they act as a safety feature for extracting the catamaran if it runs aground or gets stuck in the mud.

The crablike yacht is estimated to cost $30 million to build. The construction would take roughly two years. A smaller and lighter weight PAGURUS can be built from carbon fiber with water jet power and a top speed of 32 knots. This vessel can be built for $8 million without screwdriver technology.

2021: The initial designs for the amphibious PAGURUS are released.