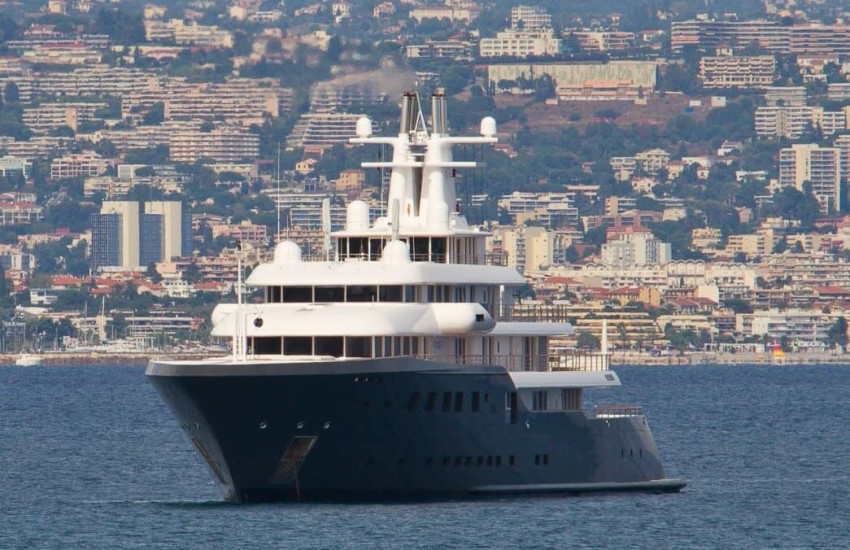 ICE yacht is a 90 m (296 ft) long superyacht that was launched in 2005. She was built by Lurssen shipyards which is one of the most renowned yacht builders in the world.

ICE Yacht was built in Germany by Lurssen, one of the world’s most prestigious shipbuilders. It was launched in 2005.

This gorgeous vessel can seat 14 in 7 cabins guests as well as 28 in 14 cabins staff members in luxury.

ICE is owned by Suleiman Kerimov, with an estimated net worth of $17 billion, who purchased the yacht for $150 million.

The ICE superyacht won multiple “Superyacht of the Year” at the 2006 World Superyacht Awards.

To ensure that the inside met the owner’s exact specifications, Terence Disdale was entrusted to design and create the custom interior for the ICE Yacht.

The inside of the yacht is decorated in a similar manner to the outside, with bright and airy elements that complement the ship’s overall style.

The interior is incredibly well made and polished in an exquisite manner across the whole piece.

The upholstery is made out of light cream fabrics and leather, with exotic wood accents added.

This exterior was done by Igor Tim Heywood and his team, who designed the outside of the ICE Yacht.

He wanted the ICE Yacht’s exterior to look like it had a lot of space, with deck passages that looked like they were from a movie.

The inside of the yacht is also big and luxurious, with a minimalist modern design. This is what Tim Heywood wanted when he made the ICE Yacht.

He was able to achieve what he set out to do. A few carefully chosen, high-quality materials are used throughout the whole yacht.

Toward the front of the main deck, there is a beautiful owner’s private outdoor lounge area.

The ICE has very low emissions, vibrations, and noise, as well as a very clean operation when it was delivered to its new owners.

Her cruising speed is around 14 knots in seven staterooms. She is powered by two ABB drive units, according to the manufacturer.

Ice was the first yacht to include Azipod drive units in lieu of traditional shafted diesel engines; these devices enable her to go up to 6000 nautical miles at a speed of 14 knots in seven berths.

Annual operating costs for the ICE Yacht are estimated to be between $10-50 million.