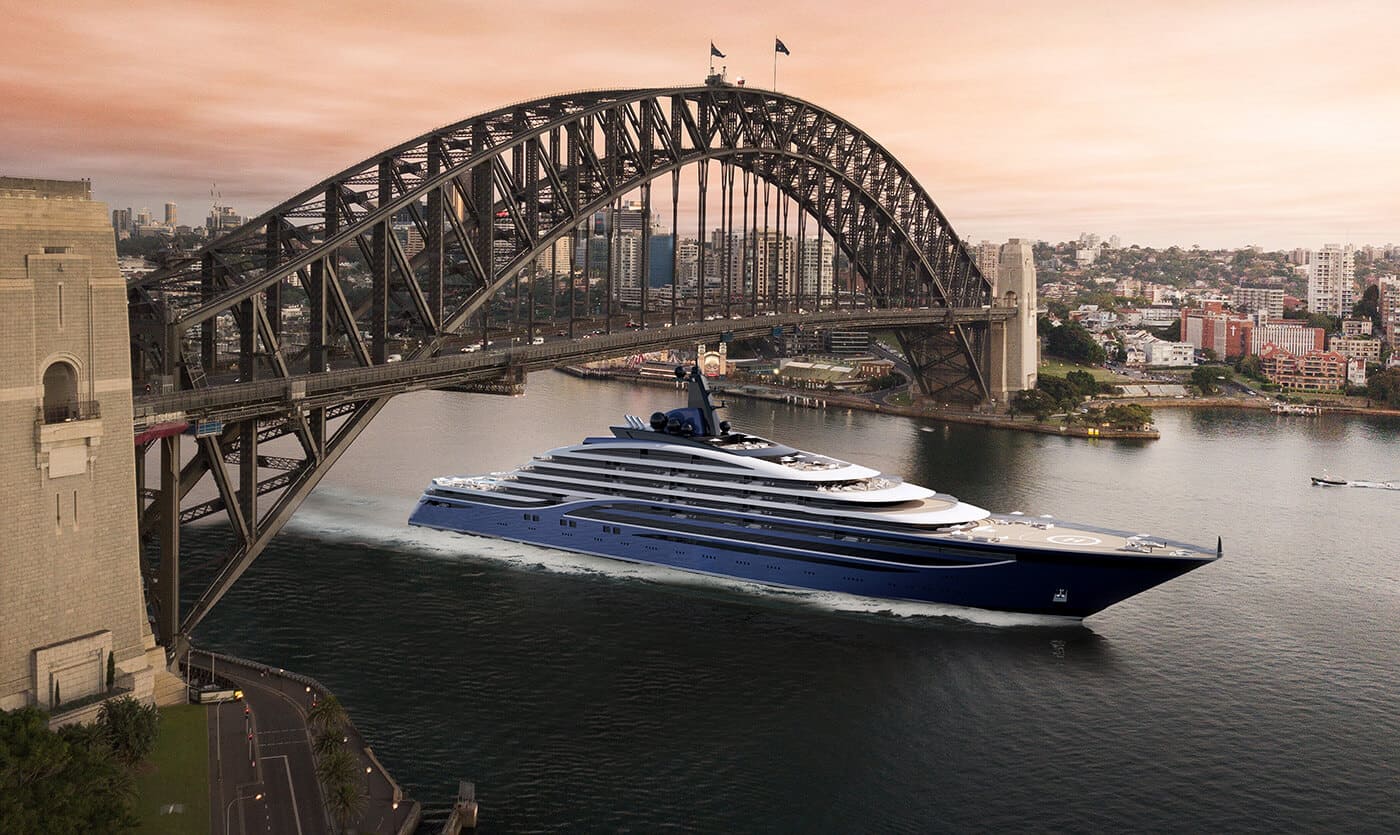 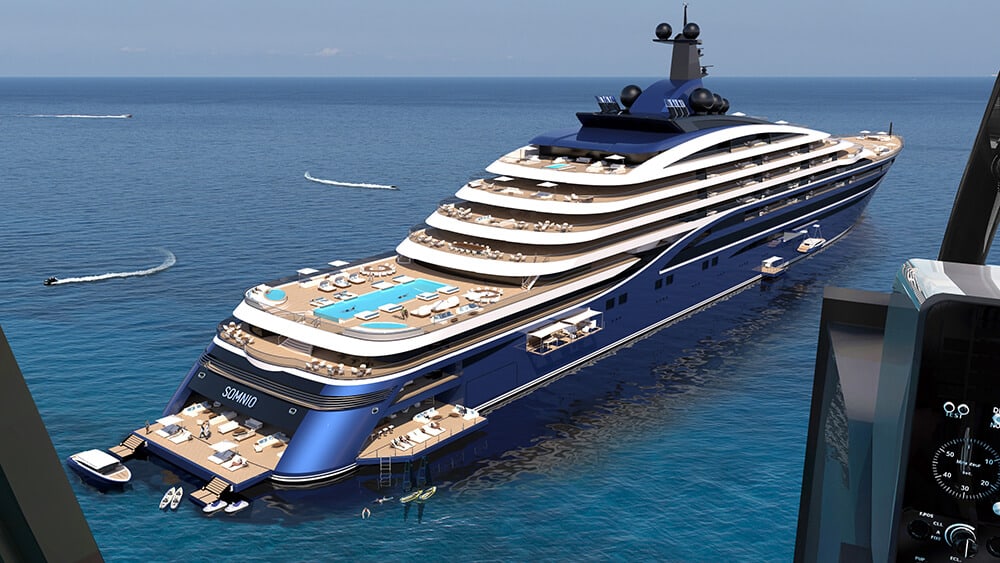 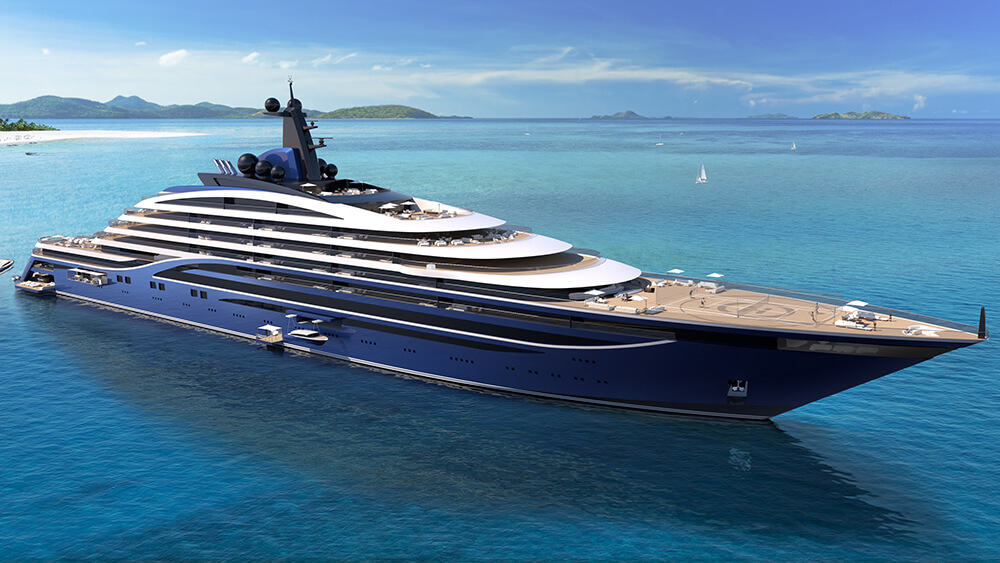 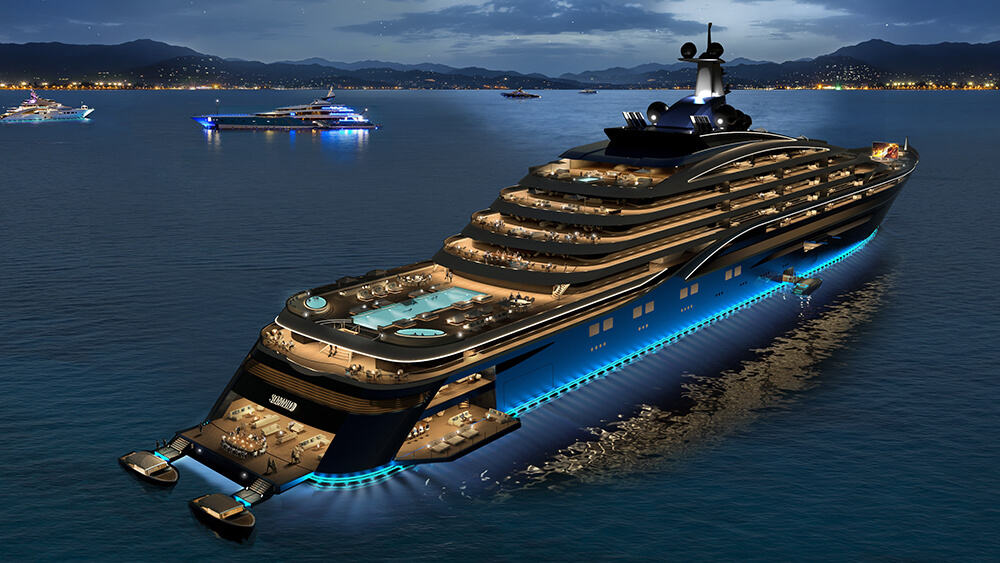 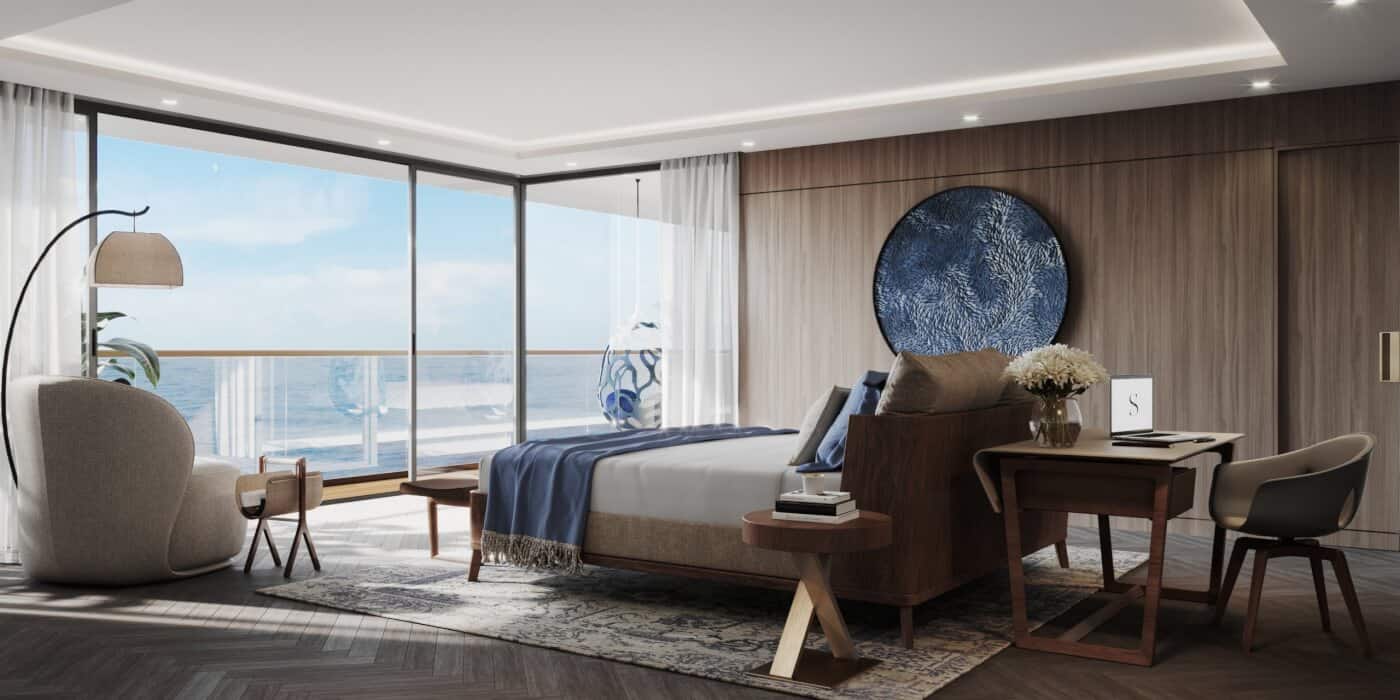 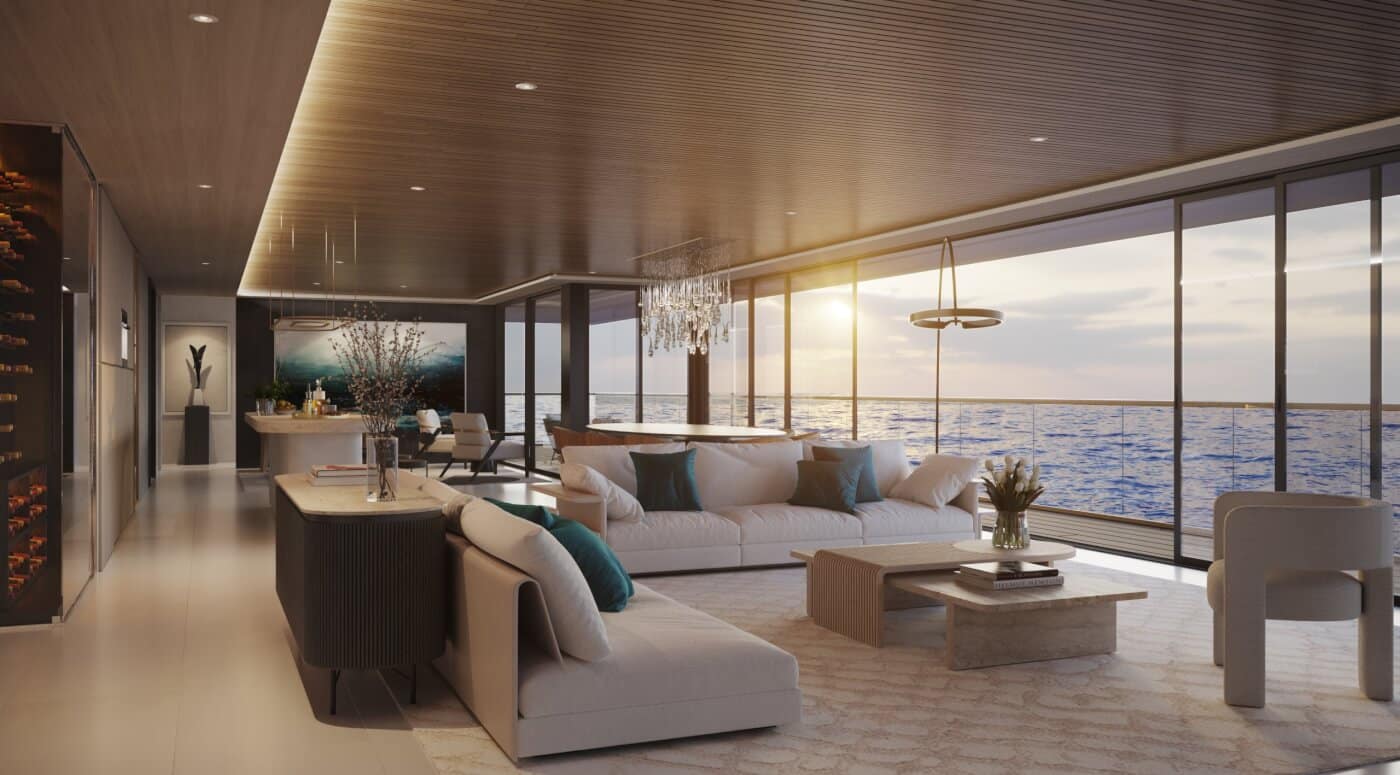 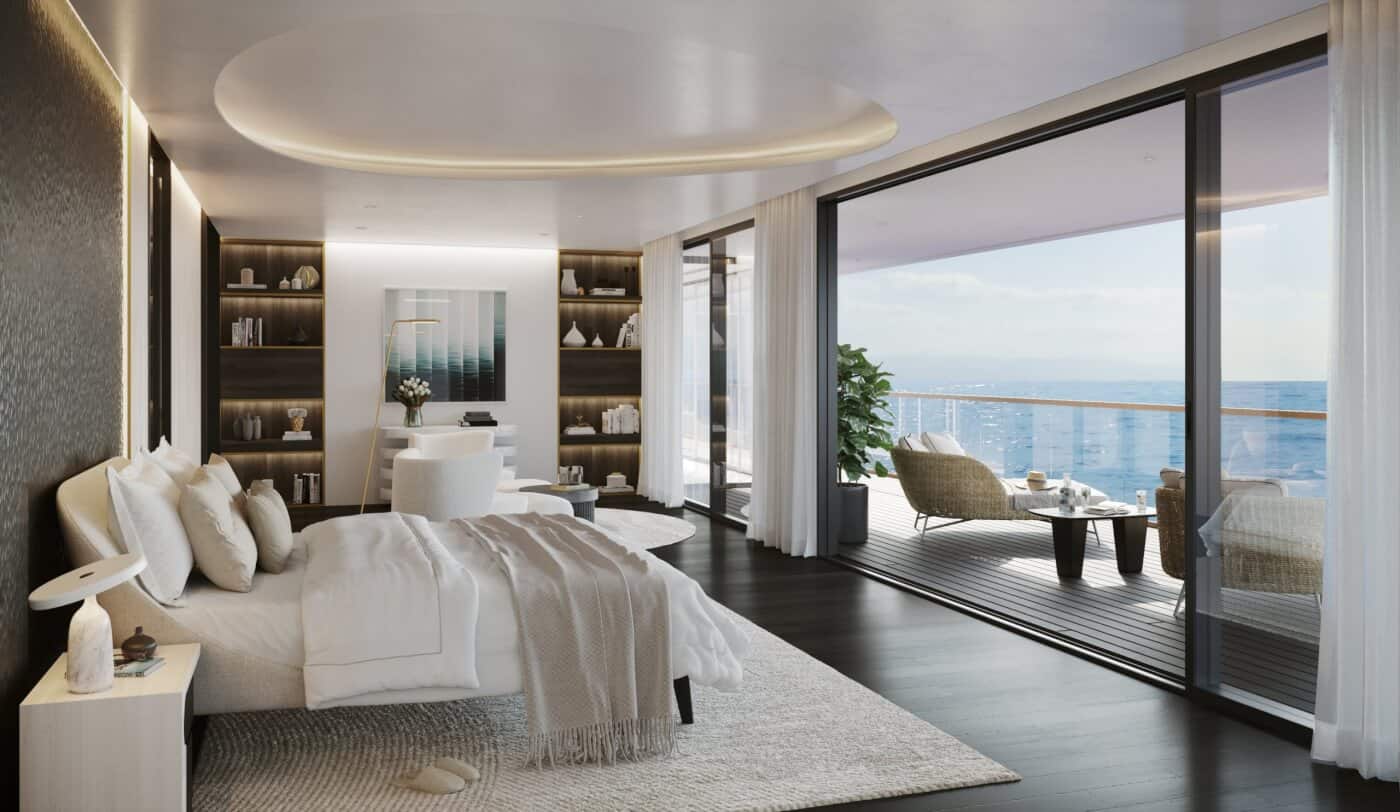 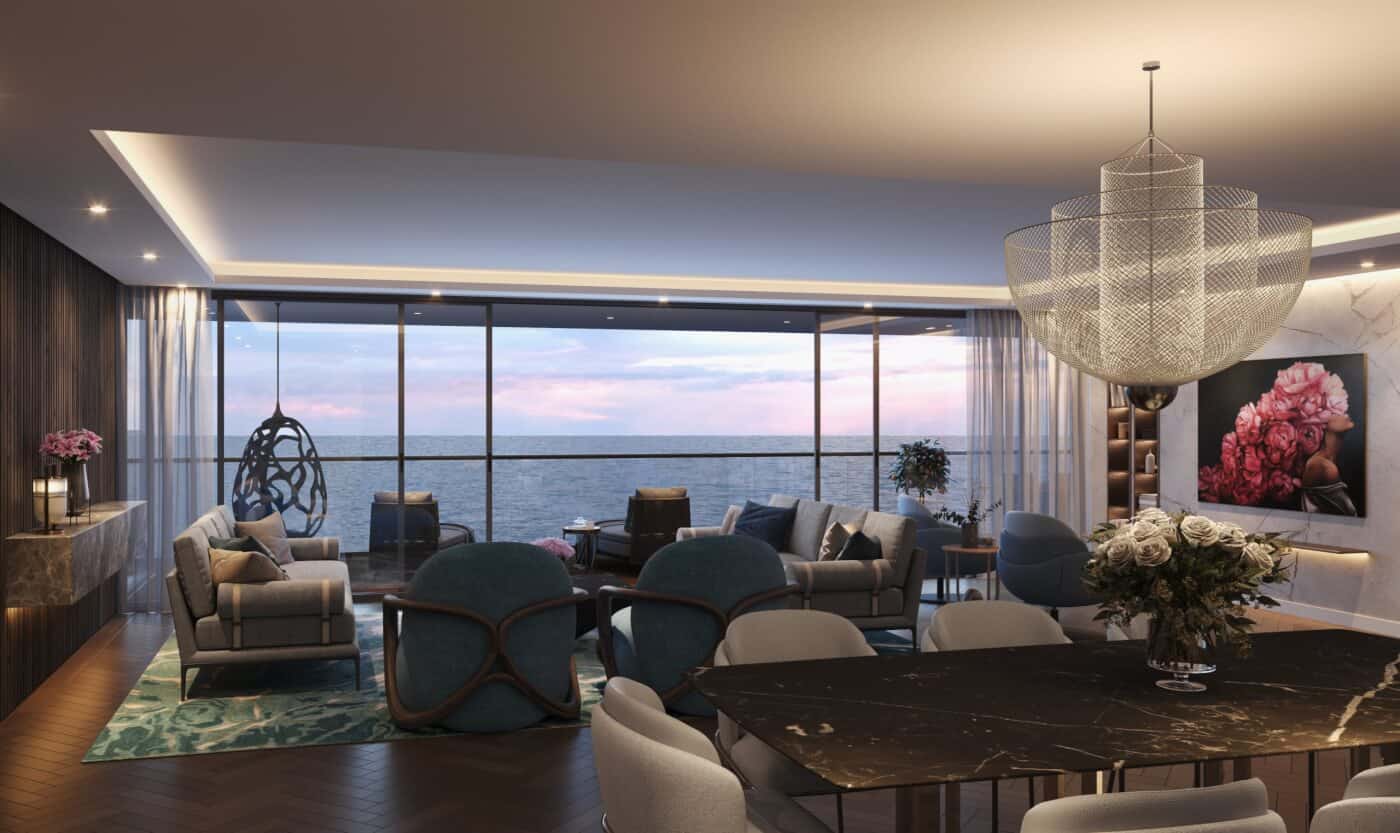 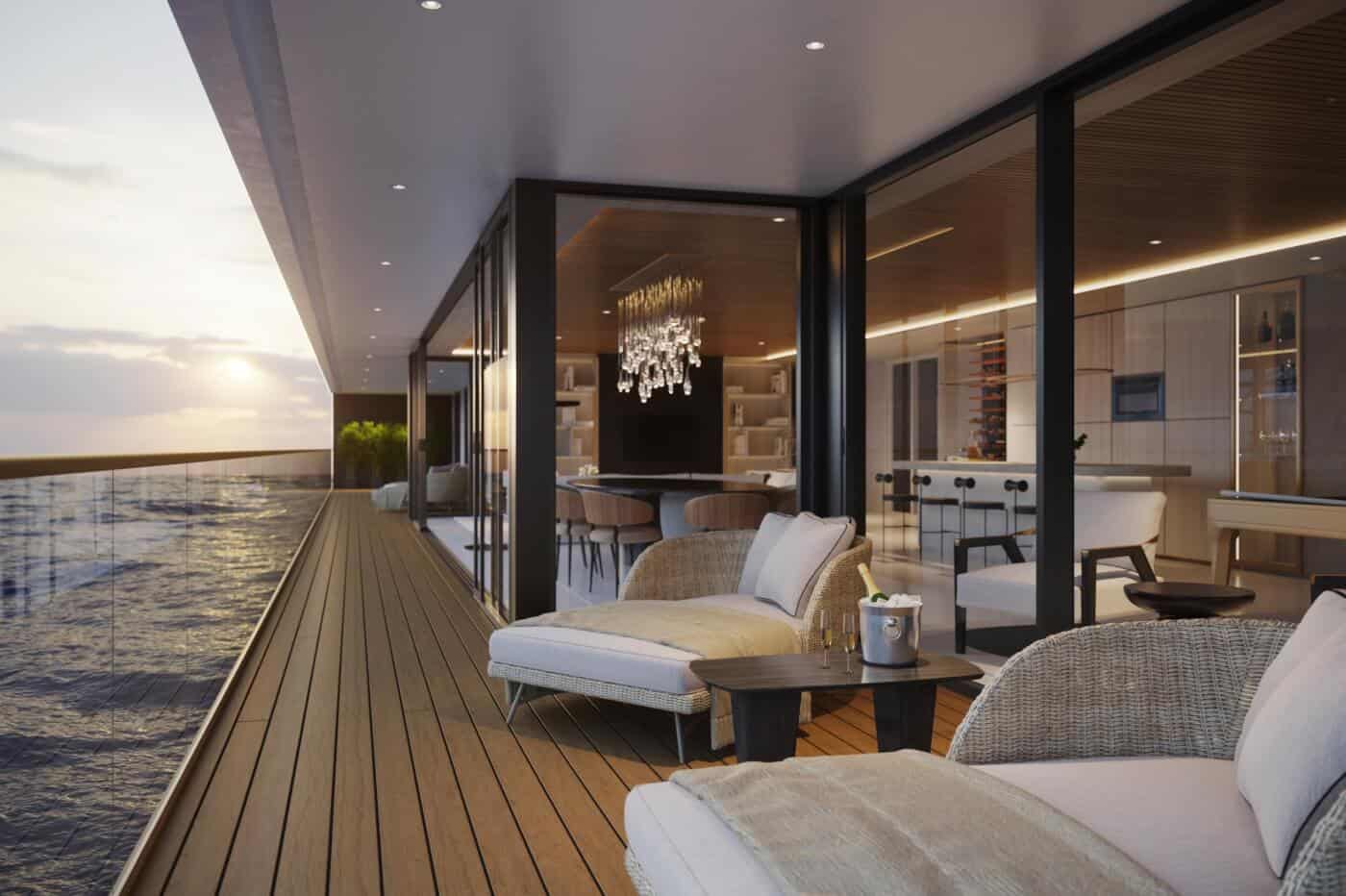 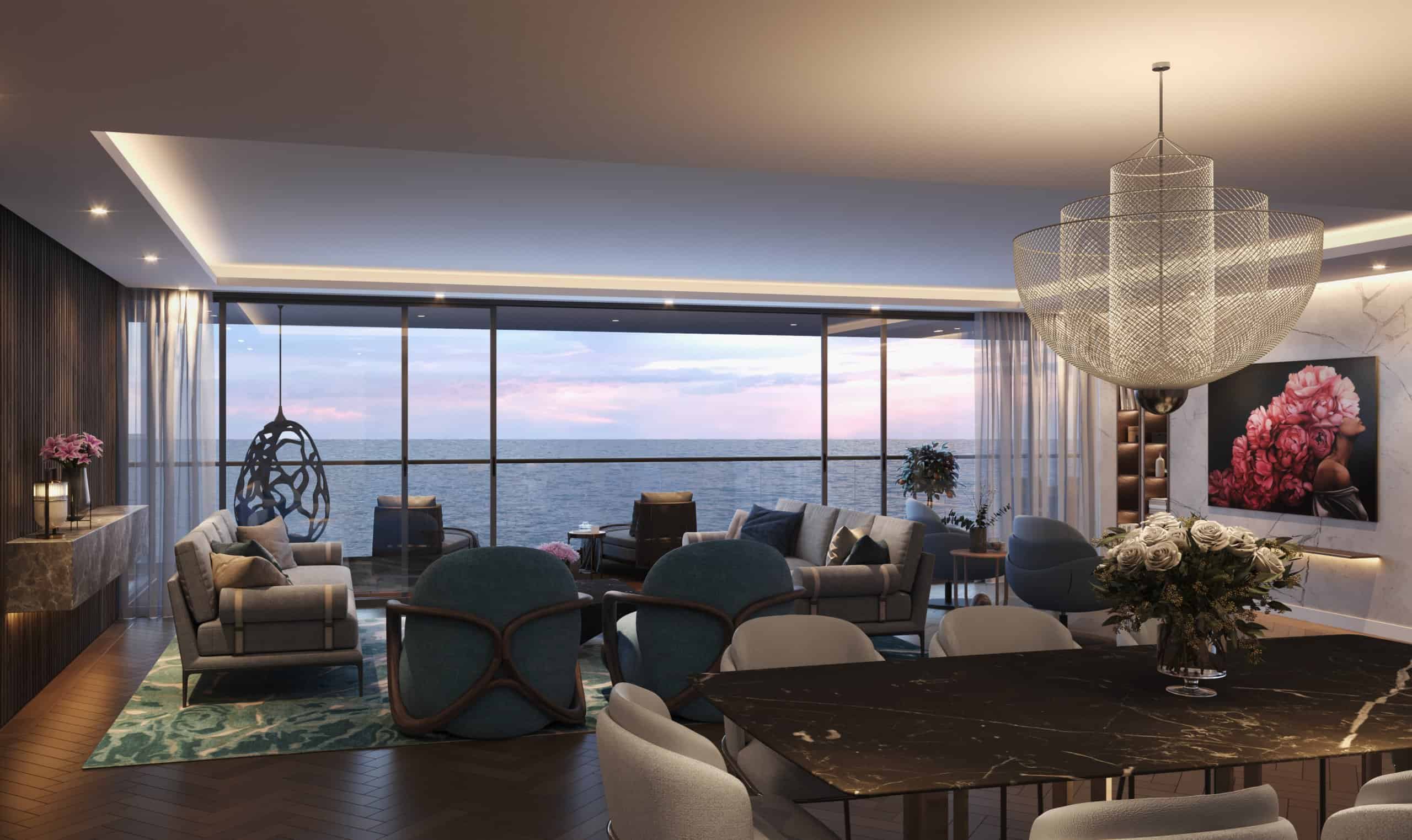 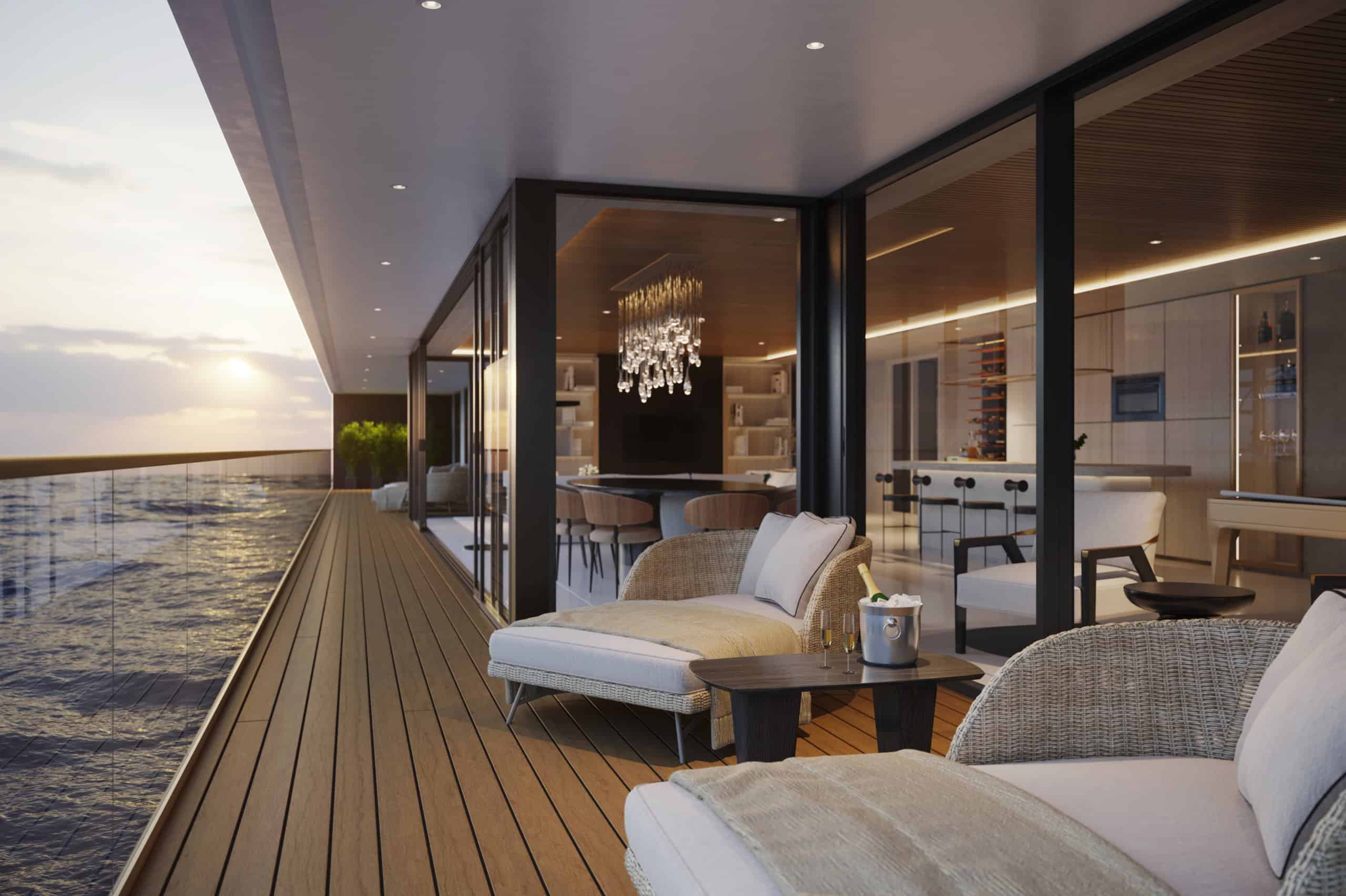 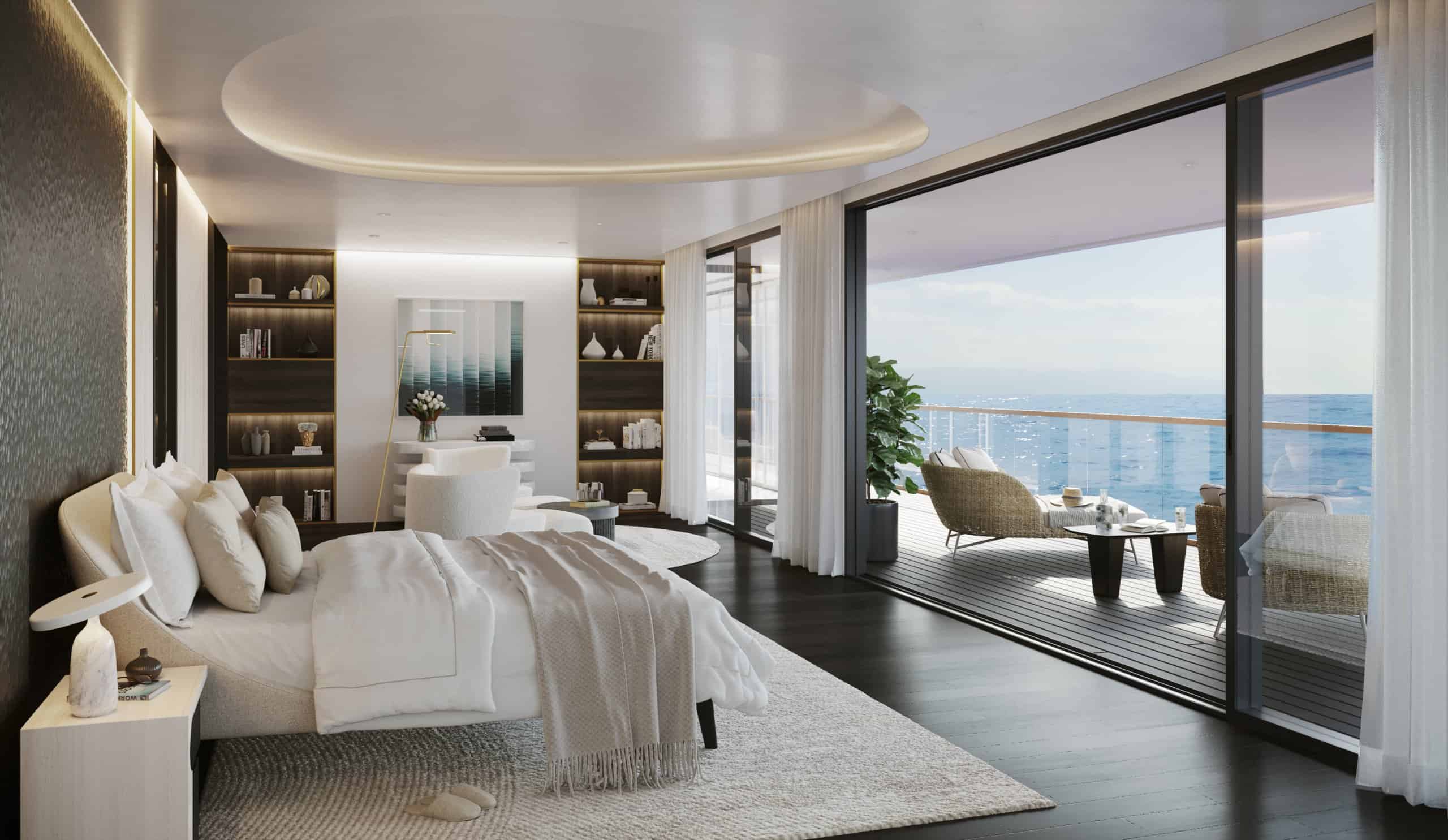 SOMNIO yacht is the name of an exclusive new yacht project that will measure 222 meters (728 ft) and will become the new largest yacht in the world, both by weight and length.

This $600 million project has been described as a residential cruise ship designed to take its exclusive passengers around the world to the most sought-after destinations in remote places.

The interior of the SOMNIO yacht will be made up of 39 individual apartments, which are to be sold separately, giving this mega yacht more than one owner. The yacht is currently being built by VARD in Norway and is expected to set sail sometime in 2024.

While the exterior of the SOMNIO yacht is being constructed by a shipyard specialized in cruise ships, the interior is unmistakably that of a superyacht.

The London-based design house Winch will collaborate with Tillberg of Sweden, both of which have extensive experience in the world of yacht design.

This will elevate the interior of SOMNIO and set it apart from other residential vessels like, for example, THE WORLD, which appeals to a far more budget-conscious target audience.

By combining the upscale amenities and design of a super yacht with the capabilities and facilities of a luxury cruise liner, SOMNIO is meant to cater to those who want to explore remote corners of the world from the comfort of their own home on the water.

The SOMNIO yacht will have 39 apartments available for purchase which can be customized with additional rooms or private facilities.

While a large portion of the yacht will be shared by all residents, SOMNIO also prioritizes the privacy that a private yacht might provide.

Buyers are encouraged to add a kitchen to their apartments to make themselves self-sufficient and able to cook for themselves on longer journeys.

However, an onboard restaurant with room service is available to cater to the needs of residents should they want a more luxurious experience.

Apartments onboard the SOMNIO yacht range from just one-bedroom suites to four-bedroom residences, which can be customized to include a library, massage room, private gym or office space.

Sizes will start at 182m2, which includes 148m2 interior space and a 34m2 terrace. The largest apartment available is the 963m2 penthouse which spans across the entire top deck.

With 602m2 interior space and a spacious 361m2 deck, this property is guaranteed to attract high-profile buyers.

The interior design is entirely customizable, and buyers are invited to submit their ideas and requirements to the team at Winch.

The idea is for each resident to customize their living space to their own lifestyle, which might include extended stays onboard or several shorter trips. Some might plan to work onboard while others will spend time with their families, which might require more space.

In addition to a large swimming pool, multiple jacuzzis, and several in-house restaurants, SOMNIO yacht offers a 10,000-bottle wine cellar, a large beach club with water sports equipment, and a panorama lounge to its residents.

SOMNIO will become the new largest yacht in the world, measuring 222 meters (728 ft) and taking the title from AZZAM. At a total weight of 33,500 tons, this massive yacht is often compared to a small cruise ship that caters to the richest and wealthiest.

However, instead of joining the never-ending race of building new super yachts, SOMNIO is set to create an entirely new niche, combining yachts and cruise ships into the so-called yacht liner.

According to Jim Dixon, the creative director of yachts at Winch Design, a large part of the building process of the SOMNIO yacht will be similar to that of a cruise ship.

VARD, where the SOMNIO yacht is being constructed, has extensive experience in this field which is why the shipyard was chosen for this project.

Erik Bredhe is just one prominent name behind this high-profile project. The former Captain of the residential cruise ship THE WORLD is part of a steering committee that will be in charge of selecting residents for SOMNIO and inviting them to purchase apartments.

With this, he hopes to create a “community of like-minded individuals” on board the mega yacht. Even though the launch of SOMNIO still lies at least two years in the future, there is already considerable interest in this new yacht, according to Jim Dixon.

Since the onboard apartments are highly customizable, there is even the possibility of one owner purchasing more than one residence aboard the yacht.

This unique new yacht project will feature six decks, a large swimming pool aft of the vessel as well as a full beach club.

The 39 apartments will be spread across the decks and only the largest of which will occupy the entire top deck.

This penthouse suite will be the most exclusive onboard the SOMNIO yacht and is expected to sell for far more than the estimated $20 million of smaller apartments.

Digital renders of the mega yacht portray it with a metallic blue exterior with white elements and a large aluminum superstructure. The decks will be made of light teak with white or cream deck furniture.

The front of SOMNIO will have space for a spacious helipad which allows even large aircraft to land comfortably.

The SOMNIO yacht will follow an itinerary all around the world, prioritising less-visited locations to be able to provide unique experiences to its residents.

The highly-experienced crew is prepared to cater to every need of its guests and adjust the route according to the wishes of the residents. ‘

Day trips and land excursions are, of course, available on request, as well as special events and celebrations.

SOMNIO is a luxury project, and as to be expected, the price tag of this mega yacht is sizable. The project is estimated to cost between $500 and $600 million, although an exact figure is not publicly available.

The 39 luxury apartments will be available for $20 million each, although sales are expected to be by invite only. Each apartment will be customisable and can be adapted to the needs and lifestyle of each resident.